Mayor Vi Lyles announced in a Thanksgiving video message on Thursday that she will seek re-election for a third-term in the delayed municipal elections scheduled for spring 2022. Lyles, who was elected mayor in November 2017, has been a popular mayor during her first two terms, with Republicans conceding the seat in 2019 by refusing to run anyone against her.

That is not to say that Lyles hasn’t had her critics on both sides of the aisle. She inspired ire among local Democrats in 2018 when she supported Charlotte’s bid to host the 2020 Republican National Convention, despite not having a vote in the matter. More recently, she drew criticism from Republican city council member Tariq Bokhari for a lack of transparency in announcing her $250-million Mayor’s Racial Equity Initiative.

At Monday night’s council meeting, Mayor Vi Lyles acknowledged she could have been more upfront with the goals of the initiative before its announcement, but emphasized that concerns about secretive spending are unfounded as council will need to approve any allocations tied to the initiative.

In other council news, Mayor Pro Tem Julie Eiselt announced in a Twitter thread Sunday night that she will not run for reelection in 2022, ending her tenure on Charlotte City Council after three terms. “It has been an honor of a lifetime to serve the people of Charlotte as Mayor Pro Tem and an At-large member of the council,” she wrote. “I am very proud of the work we have done over my three terms to move Charlotte forward as a city that strives to improve the quality of life for all residents, and values all people equally regardless of race, religion, economic standing or gender identity.”

Council Approves Up To $75 Million in Innovation District Spending

Charlotte City Council met for a business meeting on Monday night, and there was plenty on the agenda, with three public hearings that drew dozens of speakers, but perhaps the most critical decision made in the seven-hour meeting was the approval of up to $75 million in spending to move forward with one of the larger developments Charlotte has seen in some years.

The Atrium Health Innovation District will be built on approximately 26 acres along McDowell Street between Stonewall and Morehead streets and anchored by the Wake Forest School of Medicine. The first class of students is expected to begin attending the school in 2024. There were two items related to the district on Monday night’s agenda: $60 million for public infrastructure and parking to be reimbursed through property taxes, and $15 million for public infrastructure improvements to be reimbursed in bond referendums or other funding sources.

The city would be on the hook for one third of the $60 million, which would be reimbursed through 90% of the city’s newly generated property taxes over 15 years. The county would pay the remaining two thirds through the same tax increment grant, if approved by the Mecklenburg Board of County Commissioners next month. Assistant city manager Tracy Dodson said Monday that the city’s investment will leverage $1.5 billion in private investment and the Innovation District will bring an estimated $811 million economic impact.

Multiple speakers addressed council Monday, many of whom represented local labor organizations and asked council to leverage their spending with demands that Atrium implement apprenticeship programs in the construction of the district, which council did not do and Atrium has shown no willingness to do in previous public conversations.

Some folks also spoke in support of the development, including Clarence Armbrister, president of Johnson C. Smith University. Charlotte’s only HBCU will be a close partner to Atrium Health in this development through a pre-med program that feeds into the med school, among other mutually beneficial programs.

The COVID-19 test-positivity rates for Mecklenburg County residents remains in the middle-six range, with the most recent data release showing a rate of 6.7% as of Nov. 22, with Nov. 16 marking the last time the county fell below 6%.

County health officials have said that the mask mandate will be lifted when the county sees test-positivity rates drop below 5% for seven straight days. The next data update will be published on Monday, Nov. 29. There have been no releases of other in-depth COVID-19 data for Mecklenburg County residents since Nov. 3, according to the Mecklenburg County Public Health dashboard.

Longtime South Boulevard music store Manifest Discs announced this week that they will soon close their doors for good, and on Friday launched a liquidation sale with the aims of getting rid of their entire inventory.

The Columbia-based Manifest Records & Tapes chain announced its closing in 2004 after 19 years, though the South Boulevard location had only been around for five years at that point. It reopened as Manifest Discs. The store was bought out by Sunrise Records in February 2020.

Wednesday’s Instagram post announcing the closing did not wax nostalgic like past posts have, only mentioning that the liquidation sale would feature items ranging from 30%-75% off. Dozens of folks were at the location on Friday at around 3 p.m., with a line wrapped around the inside of the store.

“Manifest was never the same after the first time it almost closed but I have a lot of fond memories,” one Twitter user responded to the news on Friday. “I spent many a night or afternoon digging through the CDs there trying to find increasingly more obscure music to enjoy … At its best, Manifest had a deeply knowledgeable staff who were always eager to push you to listen to new and interesting stuff.”

Police are asking for help in identifying the driver who struck and killed a woman with their car on Thanksgiving night, according to a CMPD release. The report states that, at around 10:30 p.m. on Thursday night at the intersection of Beatties Ford and Sunset roads in north Charlotte, police responded to reports of a woman lying in the roadway and found the victim dead.

An investigation found that the woman was crossing Sunset Road in a marked crosswalk when she was struck by a fire-red, two-door Ford Explorer. The car is believed to have been a 1995-2001 model and likely has damage to the front end. Police are asking that anyone with information contact Detective Crum at 704-432-2169, ext. 4, or contact Crime Stoppers at 704-334-1600. 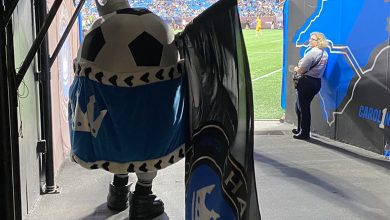