When Phase 2 of Governor Cooper’s COVID-19 reopening plan was announced in May, Charlotte’s restaurant industry scrambled to prepare themselves. The team at 5Church in Uptown Charlotte joined the ranks of reopening restaurants in June, but only made it about a month before deciding to close the doors indefinitely.

“It has become clear that there is no cogent plan from any local, state or federal officials allowing for the safe and solvent operation of a restaurant in North Carolina,” the 5th Street Group wrote in a statement that was shared via social media.

After a five-month closure due to the pandemic, 5Church’s flagship location in Uptown has announced that it will reopen its doors on Feb. 4. When indoor dining returns to 5Church, as will renowned chef and co-owner Jamie Lynch, though this time he’ll be joined by a new executive chef, Sherief Shawky, as well as longtime pastry chef Michaela Moehring.

In the face of uncertainty, all that’s left to do is stay busy. In Lynch’s case, that means opening a new restaurant, the Tempest in Charleston, SC, and planning to open another in Tennessee in the coming months. He and his 5th Street Group partners will open Church and Union in Nashville in February.

Back in Charlotte, the team has been organizing the dispersal of staff from 5Church to get their hours in at Tempest and another sister restaurant, Sophia’s Lounge, located in The Ivey’s Hotel in Uptown.

“We’ve shifted a lot of our operations to Sophia’s Lounge,” Lynch tells Queen City Nerve. “We started doing brunch just to help keep the business afloat during the hard times.”

5Church pastry chef Moehring, for example, has held a residency at Sofia’s Lounge while 5Church has been closed.

As for 5Church’s newly announced executive chef Sherief Shawky, who was recently promoted from chef de cuisine, he used his time away to curate a new menu for the reopening, including a seafood tower that features oysters, jumbo shrimp, lobster and Alaskan King Crab.

After opening 5Church Charlotte in 2015 with his friends Patrick Whalen and Alejandro Torio, Lynch’s career took off, eventually leading him to compete on season 14 of Top Chef. His introduction to the industry wasn’t as glamorous.

Lynch started his food-service journey as a dishwasher in Marblehead, Massachusetts, when he was 15. He spent his late teens and early 20s roaming from state to state until he eventually landed in San Francisco, where his career began to flourish. He then moved to New York to work under more seasoned chefs.

Lynch was a young cook with so much left to learn and looking back, he shares that he “didn’t know anything” about the business.

He continued to expand his knowledge in 2018 when he opened a farm in Gaston County to cultivate fresh ingredients for his restaurants.

Like Lynch, Moehring started her career at 15 years old, working in a corporate kitchen as a prep cook, expeditor and eventually, a line cook. After moving to North Carolina, she pivoted to an upscale restaurant working as a pastry cook.

“After a year or two of working there, I decided to go to culinary school [at Middlesex County College] and fell in love with food and started my journey up north,” Shawky shares of his introduction into the culinary world. “I came down here, worked with chef Jamie and it’s been a blessing ever since then.”

He’s worked under Lynch for a little over a year and says he wants to eventually become his right-hand man at 5th Street Group.

“I am looking to develop with the company and grow as much as I can,” he tells Queen City Nerve.

Just like its staff, 5Church is a living, breathing entity that seems to grow bigger and bolder with every pivot.
The 5Church Charlotte space is known for its large-scale artwork and hand-painted ceiling, which includes every word of Sun Tzu’s The Art of War written out in its entirety.

5Church Charlotte’s revamped interior will feature artwork inspired by Aesop’s Fables, with each artist showcasing their interpretation of different fables in various styles. Along with the new artwork, the space is now equipped with a REME Halo LED air purifier in the HVAC system to help with sanitization and circulation.

The need for reinvention is a tale as old as time. When the doors open on Feb. 4, customers can expect a new menu and new artwork adorning the walls, leaving guests with that same fantastical feeling. 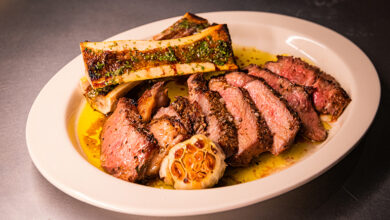