When I meet with Eulises Orellana at the 704Games offices, where he works on quality assurance and IT support for the local video game publishing and development company, he’s tired but inspired.

The 24-year-old recent Central Piedmont Community College graduate was up until 5:30 in the morning working on his side project, Axel Smooth Saves Charlotte, an indie video game in the nostalgic, side-scrolling, beat-’em-up style of Teenage Mutant Ninja Turtles or Double Dragon more than a year in the making.

We meet at noon on Thursday, but his few hours of sleep aren’t showing; he’s too enthusiastic about the days to come. On Saturday, March 23, Orellana and his team of nine amateur developers will premiere Axel Smooth Saves Charlotte, the first chapter of Axel Smooth’s potential wordlwide journey, at Abari Game Bar’s Third Anniversary Block Party. The game has the titular character stomping around scenes in Abari, NoDa and Uptown Charlotte beating up aliens. Where things go from there, no one can say.

The tale begins with a simple request from Michael Pliaconis, an instructor in CPCC’s Simulation and Game Development program, to Abari owner Zach Pulliam: he wanted a game cabinet — what gamers call those big boxy games you find in an arcade. Pulliam hooked him up with a Primal Rage cabinet, then the two got to talking about the amazing talent coming through the SGD program.

Students had been taking part in Game Jams, all-night hackathons in which teams would get together and develop indie video games within the span of 24 or 48 hours. Pulliam wondered how Abari could showcase some of that hard work and hidden talent, and the two eventually agreed that Pulliam’s bar would host a cabinet for the next Game Jam winner.

Enter Jonny Westfall, whose Axel Smooth idea won the Game Jam in December 2017. Westfall then began forming a team of about 15 amateur developers, including Orellana, to help bring the game to fruition before Abari’s Second Anniversary Block Party in March 2018. 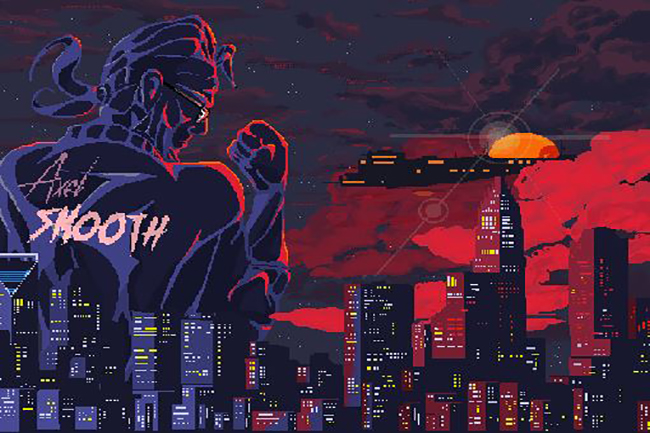 The guys worked day and night, and they were able to get a demo version of the game ready for the party. There were plenty of bugs, Orellana says, but it was worth it to watch folks play their game in the Abari parking lot, which is exactly where the actual demo was set.

The game needed lots of work though, so the team kept at it. Now, a year after that experience, Axel Smooth is finally ready to debut in its own cabinet designed by Southern Tiger Collective.

Well, almost ready. When we meet on Thursday, Orellana is still working on the third level, which is set at the intersection of Trade and Tryon streets.

“Those statues, they have been a pain in my ass,” he laughingly says of the sculptures at each corner of the Center City intersection.

Orellana lives and breathes the gaming culture. A pin shaped like a pinball table and other gaming mementos gather near the ear of his 704Games hat. On his right bicep, a tattoo of two pixelated Galaga spaceships.

“I can’t see another life,” he says when I ask how long he’s been gaming. “There’s nothing else for me, honestly, since forever.”

He says he considers himself lucky to have been a part of the Axel Smooth experience and to be working with fellow game developers on his team and supporters like Pulliam.

“It’s crazy. I feel like in a couple years time I’m going to look back and I’m going to feel really, really fortunate,” he says. “It’s one of those things, like it’s happening right now and it’s so easy because the people are so cool, they’re so nice. Zach is amazing. Everyone at Southern Tiger who’s helped me, it’s been so much love from them, it’s been so great, like it feels right. Everything’s coming together in just the right way.”

It’s that sort of enthusiasm that inspired Pulliam from the moment he became familiar with CPCC’s SGD program. He plans to keep adding games to the cabinet well after Axel Smooth premieres on it because he’s excited to continue supporting local students and amateur game developers.

It’s all a way to showcase Charlotte talent that often goes overlooked, he says.

“I really enjoy the passion they put into this, and myself, I love the indie game scene already. These are students that are local that are doing these awesome things,” Pulliam says. “That’s the real reason we did it was to showcase that Charlotte does have a gaming industry. There are people out there who are looking to make these indie games. We’re just kind of looked over with Raleigh in the Research Triangle and having things like Epic [Games]. But it’s nice to see this young talent that is passionate about game-making.”

Abari and CPCC’s partnership doesn’t just showcase the talent in Charlotte, it helps cultivate it. For a team of amateur developers to get their game featured in a cabinet at Abari is not only a huge bragging right, it’s a major addition to their respective resumes.

For Orellana, that’s a part of the process he’s most proud of.

“It helps everybody. It helps them get exposure and get feedback, but more importantly, they’ll have a published title — a released title — which is really important when trying to find a job in this industry,” he says. “I lucked out tremendously here [at 704Games], but most of my friends are still struggling. It’s one of those things, we’re trying to help as much as we can.”

As for Axel, he also has big moves ahead. While for the time being Orellana’s focused on Saturday’s debut, he says his goal is to eventually open source the Axel Smooth franchise and give the character free roam around the country.

“This game is under the International Game Developers Association, and IGDA is all across the country, so ideally, Axel Smooth Saves (Blank),” Orellanna says. “Somebody could take our code, our game, and teach themselves how to use pixel art and theoretically you could have this character across the entire country saving every single city.”

Orellanna is quick to remind me that nobody is making a penny off the development of Axel Smooth, and he plans to keep it that way. If the game is to open up to different markets, it has to be done under the same good faith it was developed under in Charlotte.

“We have to keep it student-based, keep it either free or low-cost,” he says. “We did want to at one point release it online, but we haven’t gotten that far. Right now we’re all just focused on what’s to come.”

I’m not sure what’s to come, but one thing we can all be clear on: Axel Smooth is already here.

[Abari’s Third Anniversary Block Party takes place on March 23, noon-2 a.m. at Abari, 1721 North Davidson St. There will be plenty of cool gaming stuff happening but you should also check out the music lineup, because wow.]

Students Discuss the Impacts of Inequity

'Dear Evan Hansen' Gets Imaginative with a Dark Reality