Alfred Sergel was driving home from a Charlotte jazz show in 2015, feeling stuck in his career, when he had an epiphany.

“I started thinking about other drummers, like Brian Blade or Peter Erskine that, that are composers and band leaders,” the 47-year-old drummer remembers. “I thought, what would it sound like to play drums on my own music?”

As he drove, Sergel realized that he was constantly singing melodies, drum grooves or bass lines as he tended to mundane tasks like washing the dishes or walking his dog, but he couldn’t remember any of the music because he hadn’t captured any of it. The very next day he started recording snippets of music on his phone, and songs began to flow like a stream gradually gathering force.

Sergel, who lives in the Matthews/Mint Hill area, has played on Billboard charting albums & singles by Worship artists John Mark McMillan and Jason Upton. He performed with Grammy-nominated artists jazz vocalist Nnenna Freelon and Grammy-nominated pianist Martin Bejerano. In 2016, Sergel formed the jazz combo the Alfred Sergel IVtet, which has performed at the Midwood Guitar Studio in Plaza Midwood, the Mint Museum, the Charlotte Jazz Festival and at the Plaza Midwood arts festival BOOM.

Sergel also played with Charlotte pianist Chad Lawson in the jazz group the Chad Lawson Trio in the early 2000s. This year, when Sergel played demos of his solo material for Lawson, Lawson encouraged his friend to develop and release the tunes. The pianist also agreed to play on the studio versions.

“Y Closed,” the first single off the Alfred Sergel IV EP Sleepless Journey, drops June 7. Sergel also submitted a live performance video of the tune for a spot on NPR’s intimate Tiny Desk series. On the video, which can be seen on NPR’s website, Sergel’s handclaps and wordless pop gospel vocals kick off the tune as John Ray’s bass line prowls through a thicket of Noel Freidline’s bright cascading keyboards. Sergel’s clacking percussion, on a small classroom desk, joins in, punctuating an upbeat melody laced with wistfulness and soupcon of melancholy. Sleepless Journey is slated for a September 6 release. 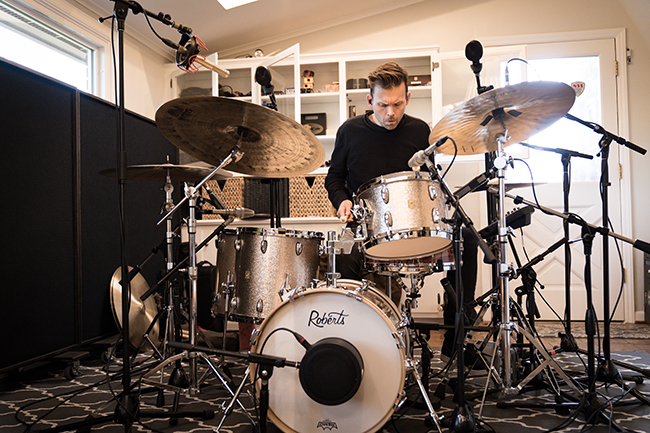 Queen City Nerve: You grew up in Maryville, Missouri. What drew you to the drums?

Alfred Sergel: My dad was the lead percussionist and percussion instructor at Northwest Missouri State University [in Maryville], so I took drum lessons from him while I was in high school. Then I got a scholarship to Florida State University’s school of music. I did my undergrad and my masters there, but I took a year off to go to Berklee School of Music in Boston. It’s an expensive school and I was a college band director’s kid. I just ran out of money. I came home [at] Christmas break, and [I heard] that a cruise line was hiring musicians. That cruise was an incredible experience because I was 20 years old and was being trained by these older musicians. Some of the guys had been in Harry Connick’s band. It was a great band and I ended up playing my first working gig.

I met my wife while I was working on the cruise ship. We weren’t supposed to fraternize with the passengers but I ran into her accidentally and we struck up a conversation. We stayed in touch and dated long distance while I finished my master degree. She’s from North Carolina, and she moved to Charlotte in 1987. I moved to Charlotte because I fell in love with my wife and we’re still married 23 years later.

You played in the Chad Lawson Trio in the 2000s. How did you reconnect with Chad?

Chad and I have been friends for over 20 years. The Chad Lawson Trio charted in the top ten with our trio record, [and] we were talking about reforming the trio. Because Chad’s become so well known in the classical solo piano realm, he said, “I want to play but let’s do your music.” He knew I had been writing. I reunited with Chad for the music I’m getting ready to release, the “Y Closed” single and the Sleepless Journey EP.

You recorded an earlier version “Y Closed” with your jazz combo Alfred Sergel IVtet. What was the genesis of the song? 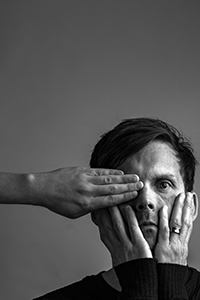 I got the “Y Closed” melody in Matthews when the YMCA was closed. I drove out there. There was a power outage and as I was driving away I started hearing this melody and I pulled over and decided to voice memo this idea that became “Y Closed.”

I was playing a gig with [Charlotte jazz bassist] Ron Brendle and I played him one of my voice memos. I was really shy about it, super embarrassed. It was me singing the melody. He said, “Why don’t you play that? You always talk about starting a band. Why don’t we start a band that plays your music?” So we started the Alfred Sergel IVtet in the beginning of 2016. I always wanted to do a group with Troy Conn. He’s probably the best guitarist I know of in Charlotte. Ron recommended a piano player in town named Phil Howe. That’s the band.

I started writing and taking a lot of the voice memos off my phone and converting them, hashing them out and finishing the compositions. We put together a couple sets of music over the course of several months and did our first show at the Midwood Guitar Studio and sold that out.

We recorded “Y Closed” on our first EP [Alfred Sergel IVtet, released 2018]. I love that version. But I had another version. The original demo is me clapping and singing. It sounds like a jazz trio with a vocal style like a Pat Metheny record. Chad and I played a show where we did this duo thing and I played him this demo. His eyes popped out, and he said, “Why doesn’t your music sound like this all the time? This is the way you hear it.” I thought, actually yeah, that’s right.

Today I got an email from NPR. I entered the Tiny Desk Contest with a video of my song “Y Closed.” The video is featured on the NPR music blog Amplifier. I and one other artist from Charlotte [Brit Drozda’s entry video for “This Too Shall Pass”] wound up joining all the other artists from around the nation. It’s crazy to see the video for “Y Closed” on the NPR music page.

How did the Sleepless Journey EP come together?

When I played my demos for Chad he said it was something I needed to investigate more. That resulted in my booking the studio time in High Point and getting Chad on the calendar. That’s why the EP is credited to Alfred Sergel IV and not the Alfred Sergel IVtet. The IVtet will still exist as a band and I’m going to do something with that. In fact I‘ll probably hybrid the two at some point. Alfred Sergel IV for this EP is focusing on a different type of musical experience. It’s still instrumental and still my original music but it mixes voice with some melodies with a little more vibe to them. It has some improvisational elements but it’s really geared toward the song.

What’s next for you?

“Y Closed” will come out June 7 and we’re going to do a press release show [for the EP] on Friday, September 6.

My mission is to promote original music in Charlotte. In my own way I want to inspire the people around me and say, “Hey you can do this!” This is a big city and there’s a lot of good music coming out of Charlotte, all sorts of genres, and jazz is one of them.

As the World Burns