Liz McLaughlin woke up in the middle of the night and realized that she had left her body.

“I looked over at my clock and I was floating,” McLaughlin remembers. “I was looking down at myself.”

Her hands seemed to be made of light, and when she reached down to pet her dog sleeping at the foot of the bed, her hands passed right through the slumbering animal. McLaughlin woke suddenly with a feeling that she had just dropped back into her body, but she knew this was no dream. She’d just had an out-of-body experience.

Out of Body is an art exhibit featuring McLaughlin’s friend, Charlotte painter Arthur Brouthers, that opens July 12 at C3Lab. The show features 40 paintings by Brouthers, produced in his signature textured and multicolored style, plus the Out of Body Experience Simulator, an interactive installation co-produced by McLaughlin that promises to simulate, and possibly trigger, a meditative state in participants. Brouthers and McLaughlin can’t guarantee that patrons will have an out-of-body experience like McLaughlin’s, but they hope to promote the benefits of meditation.

Brouthers, now 42 years old, says he’s been meditating for over half his life

“We live in a society of fear,” he says. “Meditation helps you step outside of that and be present with yourself and your surroundings. It’s a great tool to help people be in the now.”

McLaughlin, a Charlotte-based NBC reporter covering emerging technology and consumer trends, met Brouthers four years ago because of her interest in the intersection between creative pursuits and technology. She found the perfect example of that synergy in Brouther’s paintings — explosions of color that catapult viewers to the outer edges of the cosmos, then pull them back to contemplate the hidden microscopic world.

It’s a push-and-pull similar to McLaughlin’s subsequent out-of-body experience. The two friends discovered a shared interest in meditation and metaphysics. They joined a meditation group that goes on annual retreats. The first was a silent retreat where no one spoke a word.

It’s counterintuitive, McLaughlin says, but she feels the experience drew the group members closer together.

“We’re always talking about weird things [like] astral projection,” Brouthers says of the meditation group. “A lot of our work has to do with transcendence and rising above all that’s going on with media, the world and our lives.”

Such ruminations, a confluence of the cosmic and the concrete, spurred what Brouthers called a crazy idea: Why not pair his textured paintings, which simultaneously remind people of the cosmic and the microscopic, with an interactive sensory stimulus module that combines meditation, animation, modern art and sound design?

Brouthers felt the time was ripe to collaborate with other artists on the idea as Charlotte is starting to test the calming waters of meditation. The practice has becoming increasingly popular with everyone from young folks to Uptown business people, he says. Plans were hatched for the simulator. Brouthers felt that McLaughlin — with her background in organization, delegation and outreach — was the perfect person to oversee the collaboration.

“My role is bringing everyone together and making sure it will logistically work,” McLaughlin says.

No one has ever tried to create an installation like this before, she continues, so details are still being fleshed out. The project’s moving pieces include contributions from four artists. Graphic artist Pureum Lee is designing 3D animation that resembles magical and organic odds and ends, Brouthers says, which will be projected on the installation’s walls and ceiling, providing a window into outer space … or another dimension.

A guided meditation, where participants will breathe in and out in synch, is being written by astral projection specialist Claire Santos, a sound healer who works with crystal singing bowls. The meditation will be voiced by Irish artist Elizabeth Porritt Carrington. Ambient composer Ryan Persaud is creating electronic soundscapes designed to transport listeners to another realm. When all the elements come together, the installation will seem to be moving and breathing with the participants.

At least that’s the plan.

“It’s complicated because it’s not anything I’ve ever seen before,” Brouthers says. “There’s no example to follow.”

Despite the solitary nature of painting, Brouthers is pleased to be collaborating with others. He feels that successful artists like him often get help from others, but that they neglect to give credit to their collaborators. He’ll have none of that. There’s also a practical advantage to making the simulator a team effort. As it’s part of a larger show, and Brouthers is painting nonstop to meet the deadline for the show’s opening.

Of the 40 paintings comprising the exhibition, a handful is coming from galleries in Asheville and New York, but they’ve never been shown in Charlotte. The bulk of the exhibit’s paintings are brand new. Some will still be drying or curing as they hang on the gallery’s walls, Brouthers says.

Brouthers showed an interest in sketching and drawing at an early age. He got accepted into a handful of prestigious art schools straight out of high school, but his parents saw no future in his dream career. Instead, Brouthers studied graphic design, and in an act of rebellion against his parents he started DJing on the side. It was the early ’90s, the dawn of the rave scene, and Brouthers’ music career took off. At the same time, he didn’t give up on his art. During the week, he painted, sketched and studied art history, and on weekends he manned the turntables. Then both careers began to merge.

When Red Bull, one of Brouthers’ music connections, found out he was an artist, they commissioned him to produce paintings for some of their accounts. A friend introduced Brouthers to a fledgling company called Airbnb, and soon he was producing work for high-volume properties in exchange for money and a place to live. In time, however, Brouthers grew weary of the DJ life.

“There were these shady characters around all the time,” Brouthers explains. “And it was tiring being up really late.”

When his art show at a NoDa jewelry store sold 75% of the paintings displayed, Brouthers decided to focus on painting full-time. His figurative work took a startling turn in 2007 when Brouthers devised an abstract painting technique using acrylic paints, a handful of other chemical agents and plenty of water. His work became a riot of free-flowing forms, colors and textures.

Brouthers started posting images of his innovative work on Instagram and got a lot of inquiries. People asked him how he produced his effects, what kind of paint he used and myriad other questions. Within two years, Brouthers’ work was appearing in ads and his career blew up. “It was like the tie-dye of the 2000s,” Brouthers remembers. “It was crazy.”

When Brouthers starts working on a new piece, he’s not sure what it will become. The painting may emerge as abstract, representational or an astonishing mix of the two approaches. He starts painting on the canvas and sees what happens.

Depending on the unfolding image, he’ll make the work figurative or not.

“I ask [myself], do I like it by itself or is it a good design for figurative work?” Brouthers explains.

His usual process is to finish an abstract canvas, look at it for a few days, and see if it sparks ideas for an abstract/figurative hybrid. Brouthers is also a photographer, and he shoots all the figures he uses in his work.

“If certain ideas come up that I feel would go well with a figure, I’ll do a photo shoot and try to make that idea come to life,” he continues.

One such piece appearing in the show, “Transcending-Lourent,” is a perfect example of Brouthers’ approach to his art, a gestalt of form, function and message. Over a dark background, a female figure glances down. Multi-hued starbursts and tendrils of color seem to be exploding out of the back of her head.

Brouthers says the image depicts the process of coming into and out of a meditative state.

“The painting represents the vibration and oneness with everything that surrounds us,” Brouthers says.

It’s an encapsulation of the Out of Body exhibit, where Brouthers’ art flows seamlessly into the show’s mission to promote the positive and transcendent benefits of meditation.

You never know what a show like this can inspire, Brouthers continues.

“I was introduced to meditation when I was really young, and it changed everything for me,” he says. “It’s about encouraging people to be present. I think they should have [meditation] in school here.”

For McLaughlin, the show’s message is both simple and profound: People can take a moment to pause in their busy lives. They can put away their phones for a few minutes and remember to breathe.

“It sounds simple, right?” McLaughlin says. “I remember when I first heard about meditation I thought, that’s stupid.

You’re just sitting still and breathing. But that simple act turns out to be very powerful.” 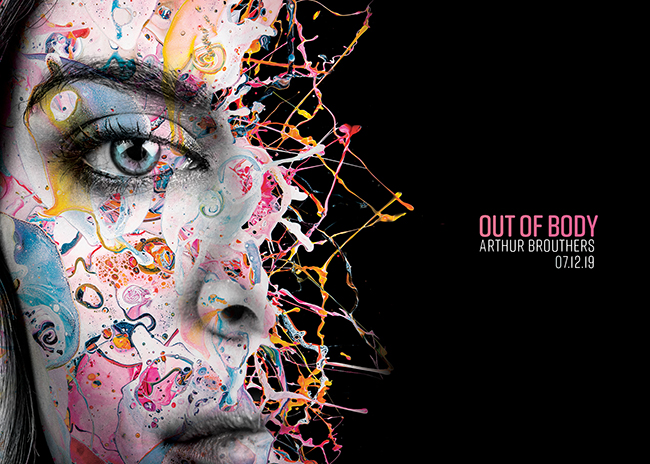