For this week’s cover design, we took a tongue-in-cheek approach thought up by our associate editor Courtney Mihocik: the pre-apocalypse. 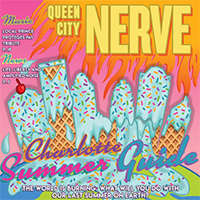 What would you do if you knew this was our last summer on Earth? Half of our listings feature environmentally friendly, socially conscious events for folks who want to go out fighting the good fight and the other half consists of kick-ass parties for those who want to watch the world burn.

It’s becoming more and more important to highlight the former because, though we know this will most likely not be humanity’s last summer, if mankind doesn’t change its direction, that summer will come sooner than later. You’re familiar with that story, even if you’d rather pretend you’re not.

The man-made causes behind global warming and climate change are well-documented, and if you’re not familiar with those, get off the internet and go read a book. If you’re one of those folks who still thinks it’s just a narrative being pushed by the mainstream media to help push for more government regulation, you should log off the conspiratorial YouTube rabbit hole and seek help.

The corporations that contribute a huge percentage of the pollution this country and the world suffer from are set in their ways, and it’s going to take direct action from both everyday people on the ground and their governments to stop it.

I’m not holding my breath for that to happen (I’m holding it because of the smog), but people are at least taking steps. Over the last year, we’ve seen pushes around the country for a ban on plastic straws, which is not a bad thing considering that, according to the National Park Service, Americans use about 175 billion straws every year, and their seemingly trivial size means most folks don’t make an effort to recycle them (only about 14% of all plastic is recycled, according to the World Economic Forum).

Quick sidenote to keep in mind: There are millions of disabled people in this country who need to use straws, so pushing for straw bans without implementing alternatives is irresponsible, but I digress. The real issue I have with straw bans is that it gives folks a false sense of complacency without making the sizeable impact that we need in order to create change.

According to a study by University of Georgia environmental engineering professor Jenna Jambeck published in Science journal in 2015, straws make up about 4% of the plastic pollution bobbing around in the ocean. When measuring by weight, it is far less than that. Bloomberg News estimates that straws make up about .03% of total plastic waste by mass.

By comparison, it’s estimated that about 46% of ocean debris is abandoned fishing equipment. Something to think about for folks who believe a pescatarian diet is environmentally friendly.

I am fully aware I’m coming off as the “Well, actually” guy poo-pooing all potential solutions, and also as a hypocrite, as I know of the major damage that factory farming does to our environment and yet have taken no steps to limit my intake of the products created through that industry.

What I’m trying to express, however, is the difficulty for everyday people to make a dent in this growing epidemic without any changes being made at the top by corporations and governments. I’m not the type to be optimistic that government will fix any problem, but I’m far less apt to trust that a private corporation will step up and do the right thing on their own (a big reason why I can’t take the libertarian platform seriously).

Mega-corporations that play the biggest role in worldwide pollution have shown over and over that they don’t give a shit about anything unless it affects their bottom line. Take McDonald’s for example. Last year, when they flirted with the idea of doing away with plastic straws — the smallest symbolic effort to help put a dent in the ever-growing floating dumps in our oceans — shareholders voted against even allowing the company to fund a report on the impact the decision would make.

Our best hope is for change to come from the ground up — grassroots efforts that begin with activists and advocates recruiting masses of people to demand change from their governments. Without stricter regulations, big corporations will continue to laugh at the idea that they are to blame for climate change until we’re all up to our waists in floating plastic.

I’m a pessimist by nature, but I’m hopeful that in the next few years, these issues will take precedent over clickbait news cycles and partisan bickering.

Despite what the news will have you believe, this era will not be remembered as The Era of Trump. It will be remembered as a time when we had a chance to do something to ensure a better future for our planet — or any future at all.

If that doesn’t happen, covers like this one won’t be so tongue-in-cheek.

Alfred Sergel Marches to his Own Beat