It was nearly 10 years ago when Dee Smith and Gereme McConneaughey learned a vital lesson that is seldom covered in dance classes: Listen to your mother.

Though Smith, who’s from Brooklyn, New York, and Charlotte native McConneaughey had both attended Northwest School of the Arts, where they shared a mutual love of dancing, they didn’t run with similar crowds. If their paths ever crossed at school, neither can remember it.

“My mom and Gereme’s mom worked together for a few years,” Smith says. “They were always hanging out and they would tell us about each other, but we never met.”

That all changed after graduation, when Smith and McConneaughey just happened to hit the same nightclub.

“It was my first time ever going to the clubs,” Smith remembers. “A Beyoncé song came on and we both started doing the same thing at the same time. It was weird and awkward but super cool too. That’s how we started.”

That near-telepathic connection between the two — and the way they both moved to the beats — sparked more than a friendship. Today Smith and McConneaughey are better known as Dzirre and Fudg3, two thirds of Charlotte’s dazzling dance troupe Basic Instinct, which will perform at Charlotte Pride on the Wells Fargo Stage at 2:45p.m. on Saturday, August 17.

Smith can’t remember when she wasn’t dancing. She was very young when her aunt started showing her music videos and introducing her to the latest dances. McConneaughey also got an early jump on expressing himself through movement. Seeing videos by Michael and Janet Jackson lit a fire under him while he was still in grade school.

Despite the pair’s passion for dance, they never thought of it as a profession. They were tearing up the ballroom and turning heads at Scorpio nightclub, but it was all just in fun. That all changed when Stephon Fonseca caught sight of their high-spirited impromptu choreography.

The Silver Spring, Maryland, native was on break from Boston College, where he studied advertising and public relations as well as ballet, modern and jazz dance. Like Smith and McConneaughey, Fonseca caught the dancing bug early. He remembers being fascinated with Michael Jackson’s “Remember the Time” video when he was just 4 years old.

“It put a spark in me, and I’ve been dancing ever since,” Fonseca says.

Smith and McConneaughey saw a simpatico partner in Fonseca. In 2011, the trio met to see if they meshed and moved together well. Eight years later, the three friends are still dancing together; Fonseca performs as Onyx, one-third of Basic Instinct’s Terpsichore trinity. It didn’t take long for everyone to realize they had captured lightning in a bottle.

“We started to become something special in our eyes,” Fonseca explains, “That was when we became more official.”

The trio chose their moniker because they knew that whatever experiences life would throw their way, their “basic instinct” would be to meet it with dance, Fonseca says. The friends collaborated on choreography, and their routines starred drawing curious spectators to Scorpio, where the troupe won the club’s Entertainer of the Year award three years in a row.

But one club could not contain the performers for long. Since its inception, Basic Instinct has performed in Winston-Salem, Greensboro, New York, Miami and throughout South Carolina. But it hasn’t been an easy road.

McConneaughey says that initially each member had to climb a steep learning curve. For him, the challenge was in realizing that each member approached things a little bit differently than the others.

“The great thing about the three of us is that we all have very distinct styles of dance,” McConneaughey continues. “That is our art, mixing the styles all together.”

McConneaughey feels the troupe’s style has grown more fluid now because the partners have been dancing with each other for so long. “We’re pulling contributions from each individual.”

Pull up any performance video of the troupe on YouTube, and the benefits of this different-yet-compatible approach are readily apparent. In the past few years, the troupe has entered contests, producing videos for the Iggy Azalea #SallyWalkerChallenge and the Nicki Minaj #MegatronChallenge. In each video, the 6-foot-5-inch Smith is a towering fulcrum, the pivot point against which McConneaughey and Fonseca’s spiraling, angular and cyclical movements pull.

Basic Instinct’s routines are precise, yet not lockstep. Subtle shifts in body placement reveal each performer’s individuality — the personality that McConneaughey feels is essential to Basic Instinct’s appeal. Each of the two videos was shot at Scorpio, Smith reveals.

“We went to the club before anyone got there and had our way with everything,” Smith says with a chuckle. “We’d get the scenery together and go over how we wanted to do it.”

One such contest paid unexpected dividends. The troupe was stoked to produce a response to a video challenge for Dawn Richard, originally of Danity Kane, because they were such big fans of the performer. “We idolize her,” Smith confesses. After deliberation, the group chose to craft a routine for Richard’s “Dance.” From a stately starting point that suggests a scene from Greek mythology, Basic Instinct turns the performance into an ode to unbridled joy.

Richard was apparently taken with the final product. She liked the video and followed each Basic Instinct member on social media. Then, when Richard came to town to perform for a CIAA event at Dilworth Neighborhood Grill, she asked Basic Instinct to dance onstage with her. Since then, Richard has always made time for Basic Instinct, Smith notes.

“We’ve gone to a lot of [her] concerts, and every time she’s super nice,” Smith enthuses. “She always invites us to the VIP.”

Another surprise guest performance occurred at Scorpio in 2014. High Point native and R&B singer Fantasia came to the club looking for Basic Instinct. The troupe had just finished dancing at Scorpio’s main stage and was performing in the club’s smaller lounge.

“[Fantasia] got on the mic and said ‘I want y’all to dance.’” Smith remembers. “Then she got into the middle of the dance floor. The music started and it was amazing.” 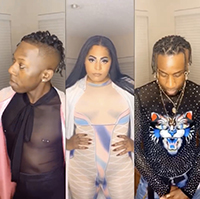 Other cherished memories for the troupe include a few choice side gigs for individual members. The statuesque Smith auditioned for and won a modeling spot on the streaming WE TV series Angel Brinks: The Real Bling, and Smith still remembers the time she won a singing contest at the historic Apollo Theater in Harlem when she was only 14 years old.

McConneaughey scored an extracurricular singing gig when he opened for R. Kelly at the Greensboro Coliseum in May 2018. It was one of the R&B singer’s first performances since the #MuteRKelly movement accelerated boycott efforts, yet despite the controversy surrounding the headliner, McConneaughey’s enthusiasm for the experience remains undimmed

“It was my first time singing for a stadium full of people,” McConneaughey says. “That was cool.”

But the most important gig for Basic Instinct — the show that is dearest to the troupe’s heart — is Charlotte’s Pride Festival, says Fonseca. By his count, this year will mark Basic Instinct’s fifth Pride performance.

“It’s the [show] we anticipate and look forward to the most,” Fonseca says. “The thing I love about performing at Pride is that it’s different from our regular performances. We have more free rein [and] we can be more open.”

“Pride allows us to perform on a grander scale,” McConneaughey says. “It allows us to be more ambitious creatively, as well.”

He feels that the members of Basic Instinct reflect a message of acceptance to their audience just by being who they are.

For an example, he turns to how he and Smith found each other, and undying friendship, more than a decade ago.

“We both went to the same high school and we never would have thought that we’d be the friends we are today,” McConneaughey says. “We hope that our camaraderie and togetherness affects other people as well.”

For her part, Smith wants people who experience Basic Instinct’s performance to feel free to be whoever they want to be and connect with the right people, whether that be in terms of friendship or more.

“I hope they walk away feeling unapologetic for whatever decisions they’ve made or who they choose to be with,” she says.

PREMIERE: Greg Cox and Emily Sage 'Find a Way' Together