On July 31, NoDa Brewing Company released Black is Beautiful, promising all proceeds from the beer plus a $10,000 base donation to EmancipateNC, an organization focused on subverting structural racism through bail reform, ending youth confinement and restorative justice. However, the new brew isn’t just a NoDa creation, it’s part of a larger countrywide initiative aimed at demonstrating inclusivity in an industry that all too often centers white men.

More than 1,000 breweries from 20 countries — including all 50 of the United States — are releasing contributions to the Black is Beautiful initiative, each one different and each one raising money for an organization of the choosing that aligns with the campaign. At the time of this writing, at least 13 Charlotte breweries are brewing their own versions of a Black is Beautiful beer.

According to the North Carolina Craft Brewers Guild (NCCBG), only 1% of breweries in North Carolina are minority-owned. This translates over to the diversity in the beer scene in Charlotte, where the only Black-owned brewery closed in April 2019.

“We have a community of people around us that love beer, that appreciate beer, that are really interested in learning more about being in the industry but trying to find an opportunity and getting their feet wet and getting their foot in the door is almost impossible,” said Eugenia Brown, more commonly known as Black Beer Chick, during a recent NCCBG virtual panel on fostering diversity in the craft beer community.

Brown has taken the initiative in expanding diversity in the craft beer scene by offering scholarships to fund Level 1 and Level 2 Cicerone training for minority women. Brown has raised more than $6,000 — enough to support 100 women for the Level 1 Certified Beer Server certification through Cicerone and 20 scholarships covering the $225 cost of the written exam for Level 2 to become a Certified Cicerone — selling shirts branded “More Bridges, Less Barriers.”

NoDa Brewing Company’s version of the “Black is Beautiful” beer was designed to have the taste of pilsner lager without the “heavy, roasty, malt” flavor associated with dark beers. Brewers there incorporated roasted grains and grain extractions in the beer as well as using Zuper Saazer and Loral hops for a floral aroma as a way to provide their personal touch to the original recipe.

As with NoDa, all participating breweries will donate 100% of the funds raised from their Black is Beautiful beers to social justice organizations of their choosing, in conjunction with the Black is Beautiful initiative. Check in with each brewery to inquire about availability in stores and taprooms. 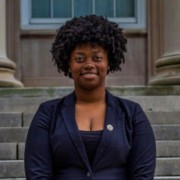