Growing up in “a little podunk house” in Gastonia, Bree Stallings always viewed herself as middle-class. Sure, part of the roof was a tarp and it was her job to put the bucket out when it rained. Sure, sometimes the light bill would lapse and she’d have to shower in the dark, or the water bill would lapse so she’d have to shower at the local YMCA, but at least she wasn’t as bad off as her neighbor, who had holes in the floor of her home that could swallow a person whole if they weren’t careful.

Then, when Stallings arrived at Queens University in 2009 and was placed smack in the middle of one of Charlotte’s richest neighborhoods, it changed her perspective. She had friends whose families owned private jets. Her so-called peers would waffle over whether to take the Porsche or the Hummer out for a night on the town.

These experiences served as inspiration behind Where I’m From: A Bree Stallings Experience, an installation the 27-year-old artist will open at C3 Lab on April 5 with a reception including a performance by renowned Charlotte poet Jay Ward.

Where I’m From will explore the places Stallings has lived through her life; not only spaces such as her childhood home, her Myers Park college residence and current apartment, but the bodies she has occupied — both her mom’s and hers. The installation will feature viewing stations that allow observers to peer into Stallings’ past and present and cover themes ranging from privacy and insecurity to poverty and immigration.

One of the most prevalent themes for Stallings in creating Where I’m From involves the preservation of memories that took place in spaces that no longer exist for her. On her Stallings’ birthday, her family lost the home she grew up in to foreclosure. Her grandparents’ homes have since been sold, and Stallings has often thought about the effects of losing the spaces in which she spent her most formative years.

“We don’t have access to any of these spaces that I used to live in, and so I think about that when I meet people who are my age and they still go back to their childhood home and talk about that at Christmas,” Stallings told Queen City Nerve. “Well, what is that like? I don’t know. None of us can go back and visit any of those things, so it was very interesting to process that. As a child I couldn’t do that and my parents can’t do that either, or my grandparents. There’s no space from which we can say, ‘This is where we were at one point,’ because it just doesn’t exist.”

Through Where I’m From Stallings will also explore other experiences she’s lived with from a young age, such as body image issues and growing up as a descendant of Japanese immigrants on her mom’s side and Charlotte natives for four generations on her father’s.

Such was the inspiration to hire Ward, whose Things I Would Say performance describes his experience as a biracial man in America. While Ward lives as a black man in America, Stallings passes as a white woman.

“We have these very different perspectives on the same kind of issue, and I thought it would be the perfect thing to tie in all the stuff,” Stallings said.

And there’s a lot of stuff. Where I’m From is the first exhibit for which Stallings has parted ways — though not permanently — with her usual painting medium. Along with the viewing stations, the installation will include hundreds of family photos and mementos hanging from the ceiling, a shrine-like “wishing wall,” photos of Stallings printed on 14-foot-long pieces of fabric and a large poem laid across the floor on vinyl.

Her installation work is a way to move away from a strict focus on aesthetic to the dialogue that a piece inspires. A current Stallings installation at the Harvey B. Gantt Center for African-American Arts + Culture consists of a tic-tac-toe game centered around the school-to-prison pipeline. Similarly, her next large project following Where I’m From will consist of many childhood games, with players’ ability to succeed at any given game hindered or helped based on a card that assigns them a race, gender, class and other identifiers.

“The conversation is the medium, not the paint or the paintbrush. The piece exists, but what happens after the interaction with the piece is what I’m interested in,” Stallings said. “I think a lot of art is going to take this approach and become less attached to the aesthetic of something and more about having it transcend a thought, or creating space, and that’s what I’ve been thinking about.”

While Stallings had only just become comfortable with calling herself a portrait artist, the title doesn’t change just because she’s experimenting with installation work, she said.

Stallings’ work has always defied labels, but that doesn’t mean it’s not fun to try them on some times. When we talked recently, Stallings had recently read an article that described the subject as a “social practitioner” and she liked the way that sounded.

It’s a great way to describe her, as her work has never been about the art itself, per se, but educating people through it. Stallings spent years working with students at Behailu Academy, which aims to empower youth from underserved communities. She now works with the Mecklenburg County Health Department on its This is Art, This is Public Health program, for which she travels around to speak with kids at Time Out Youth or the Here for Good Club at West Charlotte High School and create art centered on public health issues that affect those specific groups. She recently became an artist-in-residence with the health department, the first to even hold the position.

For Stallings, there is no removing the art from the political, regardless of whether she’s working with students or working on a portrait alone at her C3 Lab studio. That includes Where I’m From, which may seem self-indulgent at first glance, but aims to start a conversation like any other art, she said.

“Looking within and taking the time to do this kind of work, a lot of people think that’s selfish or navel-gazing, but I think it’s an act of politics, it’s an act of self radicalization because you’re taking time to say ‘No, I want to focus on what’s happened to me and process that so I can understand what I want to do going forward,’” Stallings said.

“I try to do that for myself, because that’s what I want my students to do, too. Everything that I want my students to have — to be happy and healthy and whole, to be paid well, to be mentally stable — I have to demand that for myself, too,” she continued. “It’s innately political. It’s innately radical. It just is. Capitalism does not survive on people doing this. It survives on people not reflecting, not stopping, not resting.” 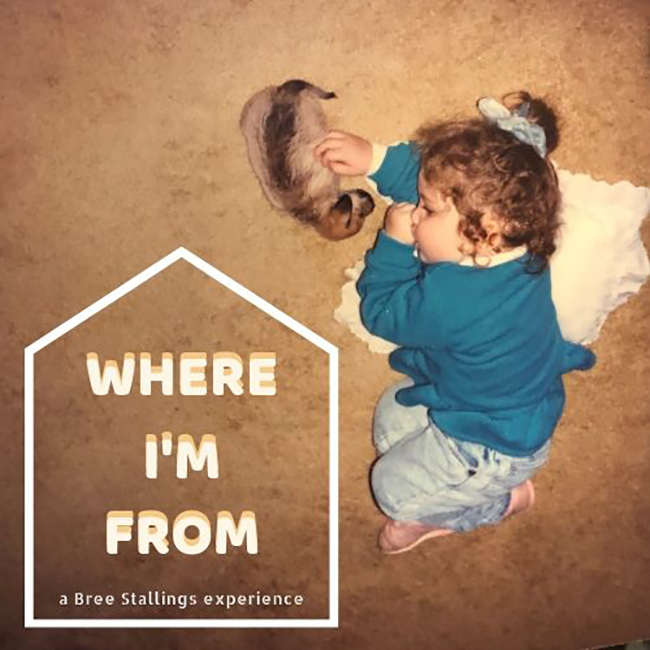 Where I’m From: A Bree Stallings Experience opening reception takes place at C3 Lab on April 5 from 7-10 p.m.; donations suggested