The North Carolina race for U.S. Senate got a little crazy on Friday night, as within hours voters learned something about each candidate: that current U.S. Sen. Thom Tillis had tested positive for COVID-19 and challenger Cal Cunningham admitted to sending “sexts” to a woman who wasn’t his wife — though they could be called “kexts,” as they were mostly about kissing.

Just before 11:30 p.m. on Friday, the News & Observer reported that Democratic Senate candidate Cal Cunningham had confirmed reports from right-wing website NationalFile.com that he had sent sexual texts to a woman who was not his wife. The texts, seen below, seem to imply that Cunningham and the woman have met up for at least one rendezvous in the past, and show the woman asking Cunningham to “make up an excuse for the fam, ditch a staffer … and be ready to kiss a lot.” Cal Cunningham is married with two children.

In one text, Cal Cunningham says he’s “nervous about the next 100 days,” which would seem to date the conversation to July. Cunningham’s reps told News & Observer that he has no plans to leave the race. On Twitter on Saturday morning, Sunshine Media Network founder Jennifer Moxley pointed out that many people had promised to make donations to Cunningham in a Twitter thread that helped break the news. She speculated that the controversy may only highlight hypocrisy in the GOP camp.

“Republicans pushed the public’s threshold for ‘inappropriate’ so high it seems hard for them to try to use moral standards against someone now,” Moxley wrote.
Earlier Friday night, Republican incumbent U.S. Sen. Thom Tillis confirmed in a tweet that he has tested positive for COVID-19, joining a growing list of high-profile Republicans like President Donald Trump and First Lady Melania Trump who tested positive after attending a nomination ceremony for Trump’s Supreme Court nominee Amy Coney Barrett on Sept. 26. While many who attended the event and later tested positive did not wear masks, including the Trumps and former adviser Kellyanne Conway, pictures show that Tillis was wearing one for much of the ceremony, at least. In his tweet, Tillis said he is asymptomatic and feels fine, though he will still self-isolate at home for 10 days.

At an emergency meeting on Thursday night, the Charlotte-Mecklenburg Schools (CMS) Board of Education approved changes to its reopening plan that will increase the amount of in-person learning that students in kindergarten-5th grade will experience when they return to school next month.

Under the previous plan, K-5 students would split into three groups and rotate between one week of in-person learning and two weeks of remote learning. The newly approved plan will split the students into two groups, which will each attend school on two days every week — Monday and Tuesday for Group A, Thursday and Friday for Group B — with everyone returning to remote learning on Wednesdays for “asynchronous” learning, which will consist mostly of work that can be done independently with little help from teachers.

In September, Gov. Roy Cooper announced public schools will be allowed to accept elementary school students on Oct. 5, paving the way for the CMS reopening plan, which will return Pre-K students to in-person learning on Oct. 12, followed by K-5 students on Nov. 2. CMS high schoolers will return to classrooms for testing on the weeks of Dec. 14 and Dec. 21. before returning to in-person learning on a rotational basis on Jan. 5.

“Having the students in the building every week will create a more normal routine for our students, even as so much is abnormal in the world right now,” Dashew said. “This revised plan should be more manageable for our teachers as well, instructing students in two groups rather than three, with Wednesdays set aside for ‘asynchronous’ learning. This decision was guided by what we believe to be best for our students and staff. In these uncharted waters, that is our compass.”

Officials with UNC Charlotte Emergency Management announced Friday that wastewater testing at a residence hall on campus had turned up the presence of COVID-19, forcing the university to require all students living in the hall to remain in place except to pick up to-go meals, accept meal delivery and attend medical appointments.

Susanna Black with WSOC reported the quarantine was implemented at Holshouser Hall, where students received an email on Friday morning informing them of the new restrictions. All Holshouser residents were tested on Friday afternoon and will remain under quarantine until their test results come back, expected to happen this afternoon. As of Friday morning, no residents of the residence hall had reported symptoms of a COVID-19-related illness, and no additional residence halls were affected, according to the university.

According to the latest data released by Mecklenburg County Public Health on Friday afternoon, just hours before bars, movie theaters and other establishments were set to open with restrictions, there have been 29,080 positive cases of COVID-19 reported among Mecklenburg County residents and 361 deaths resulting from the coronavirus. That’s an increase of 852 cases and 11 deaths since the same time last week. In-depth data for cases that occurred through Wednesday showed, on average, around 82 people were hospitalized due to COVID-19 at any given day during the past week, a decrease compared to the previous 14 days. Test-positivity rates in the county are at 6.2%, a relatively stable trend, though the above graph shows a rise in recent days.

While local schools and colleges are working to prevent or control outbreaks among their students and staff, the Carolina Panthers just made two major purchases in their attempt to ensure a safe environment at Sunday’s home game against the Cardinals on Sunday, the first in which fans will be allowed in the stadium.

On Thursday, CNBC reported the Panthers purchased two Xenex LightStrike robots, worth $125,000 each, to help disinfect showers, locker rooms and other areas throughout Bank of America Stadium. According to Xenex, the robot can kill the virus that causes COVID-19 in minutes using “pulsed xenon, a noble gas, to create full-spectrum, high-intensity UV light that quickly destroys infectious germs.” 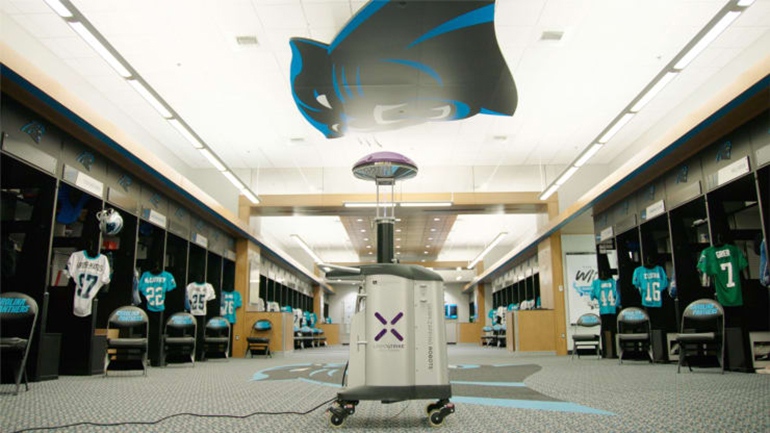 As part of Phase 3, which went into effect on Friday, large outdoor entertainment venues that seat more than 10,000 people are allowed to open to the public at 7% capacity, allowing the Panthers to host more than 5,000 fans at Sunday’s game. It appears the robots will be used mainly to disinfect areas where players and coaches congregate and work, so don’t expect to see any robots rolling around the concourse flashing fans with UV rays on Sunday … though it could happen.

Two of the three murders to occur in Charlotte this week happened on North Tryon Street, while only one victim has been identified by police. The number of homicides in Charlotte in 2020 stands at 86.

Shortly before 8:45 p.m. on Sunday, police responded to a shooting call at the intersection of North Tryon Street and East Arrowhead Drive and found a teenaged man shot dead. The victim has not yet been identified and no arrests have been made.

Just before 3:30 p.m. on Wednesday, police responded to Atrium Health University City hospital after 17-year-old Calvin Washington showed up there with a gunshot wound. Washington succumbed to his injuries the next day. Further investigation found that the shooting occurred on the 4700 block of North Tryon Street, near the intersection of Rocky River Road West, and the case has been deemed a homicide.

Just after 2 a.m. this morning, officers responded to a shooting call at the Southgate Apartments on Conway Avenue in southwest Charlotte and found 35-year-old Jonquil Thompson dead from a gunshot wound. No arrests have been made in the case.

CPCC Theatre Investigates a Murder Online with 'A Virtual Whodunnit'

Venturing Back Into the Restaurant Scene at Stir in South End