It’s undeniable: Craft beer is big in Charlotte. Local breweries have taken over the food and drink landscape in Charlotte. If you aren’t a certified beer snob by now, you are at least in search of the new brews being offered at your favorite local craft maker’s headquarters. Queen City Nerve will now deliver you a monthly breakdown of all the new releases we can get our hands on in the CLT.

This is not a review board and we do not receive product or money in exchange for listing appearances. All submissions are made by brewery representatives by deadline of publication for the information listed and may be updated periodically throughout the month.

This pilot batch was created for New Year’s Eve and is only available until the keg kicks (sorry if it already has). Andy Blake’s favorite shot is a kamikaze shot and the brewer decided to have it come to life for the holiday. The Kamikaze Sour has tart tasting notes with citrus and spritz and orange and lime aromas. The golden-orange colored beer is only available in 12-ounce draft pours in the taproom and runs at $7 for a pour. Released on New Year’s Eve 2019.

This single-batch bock will be brewed at the OG NoDa Brewing location and is available in draft only. The Winter Bock is a dark, moderately roasted, clean-tasting and biscuit-flavored lager perfect for the cooler weather. The bock is made with a blend of German and Carolina-roasted malts. NoDa calls it a comfort beer for cold afternoons and evenings this winter. The taproom release date is Friday, January 3, and will be available on the market on Monday, January 6.

This single-batch imperial porter will be brewed at the North End location for availability in draft and cans, but the cans are available in the taproom only. The porter is big, malty and smooth and was brewed with a massive load of cocoa nibs to give dark chocolate notes. Roasted peanut butter is added to give a rich twist to the imposing dark beer. So if you think you can’t handle it, fuck it and drink it anyway. The taproom release will be Friday, January 10, and the taproom will open early at 2 p.m. for the release. The beer will be available on the market on Monday, January 13.

This single-batch pale ale is brewed at the North End location with only a handful of kegs available for draft pours in the taproom only. This pale ale is a citrus zest of a clean, hoppy pale ale loaded with a hefty amount of navel citrus orange zest. The zest is paired with citrus-forward hops and makes the beer bright and smooth. NoDa says it is perfect for sipping on while listening to the symphony — probably because they are having a Symphony on Tap event on Jan. 21 at the North End taproom. The release date is Friday, January 17.

This single-batch IPA will be brewed at the OG location and will be available in draft only. Expect a light body with a heavy tropical hop aroma from the Strata hops, a relatively new hop to hit the market. NoDa made this low-calorie IPA for what we can speculate is an attempt to help people with the most common New Year’s resolution of perfecting their health. The taproom release date is Friday, January 24 and is available on the market Monday, January 27.

This single-batch kettle sour is brewed at the OG NoDa Brewing location and will be available in draft only. To pair the kettle sour-beer base, the NoDa crew fermented Tart To Finish on tart cherry and raspberry puree to add color and extra flavor to the light-bodied sour ale. The taproom release date is Friday, January 31, and is available on the market on Monday, February 3.

Honey Pie double IPA is Birdsong’s most sought after release. The brewery uses local honey from Cloister Honey for this popular release, usually selling 600 or more 4-packs on release day. Brewers Conor Robinson, Jeff Bowman and Alex Ball have found that adding the honey at high krausen during fermentation supplies the perfect balance of honey flavoring. The dark-amber colored beer has floral, piney and citrus aromas and is deceptively smooth. The beer is named after the Beatles song of the same name and was designed and named by Robinson. Jackie Hurd redesigned the logo back in 2016 with hand-drawn bees and honeycomb patterns. This limited release hits the market on Thursday, January 9, and is available in 12-ounce draft pours and 16-ounce cans. Birdsong is brewing 150 barrels this year and it may only last for four weeks. Four-packs are $18 and 12-ounce pours are $6 in the taproom.

Birdsong says that when they think of their favorite winter pastimes, chillin’ in their PJs was the common denominator. When they decided to debut the winter white ale, they landed on the name Dressed to Chill. The golden straw-colored ale has tangerine zest and fruity esters from the Belgian yeast as aromas. The tasting notes are familiar to a Belgian white ale, which is clean, crisp, refreshing and easy to drink. The seasonal release is available in draft and 16-ounce cans for $10 a 4-pack or $5 a pint in the taproom. Dressed to Chill is available starting Thursday, January 23. Tara Goulet came across an illustration of a man cozied up in a chair by artist Natalja Savranska and they knew then that the match was perfect. The brewery licensed the artwork, threw a white ale in his hand and rolled with it. The beer should be available until the end of March.

This dark-brown porter is brewed by Jeremy Claeys with chocolate, caramel and fruity flavors that lead to a crisp bitterness with a roast finish. Available on draft at the microbrewery in the heart of the NoDa neighborhood, you will waft in the chocolate, caramel and raisin aroma in a 16-ounce pour for $6. The one-off porter is available starting Thursday, January 9 and is available until it runs out. The beer is naturally carbonated and unfiltered and was named after Tenzing Norgay, one of the first two people to summit Mount Everest.

Claeys brewed this pale lager in collaboration with Dan Wade of Wooden Robot Brewery. The yeast in the lager gives off a crisp and clean taste with that extra bit of funk. There is also some funk on the nose that pairs with citrus and lemon peel aromas. The one-off pale lager is golden in color and named after Doctor Ivan “Eggman” Robotnik who was the main antagonist in the classic Sonic the Hedgehog series. Available starting Saturday, January 11 in the brewery taproom in 16-ounce pours for $6 until it runs out.

The unfiltered, hazy-gold IPA hosts tropical, citrus, mango and coconut aromas. In the sip, there are subtle notes of citrus and tropical fruit that finish silky smooth. Available on draft in the taproom starting Thursday, January 16 for $6 in a 16-ounce pour until it runs out. The beer was named after:

“There’s been some family problems, but I don’t want to bore you with that.” 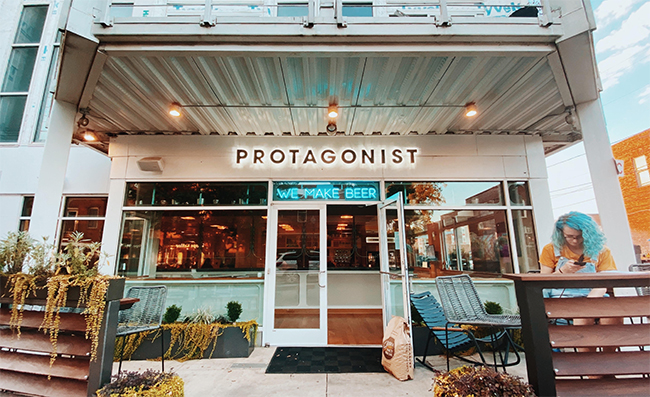 This cream ale was brewed as an ode to the state of Wisconsin and all of the “cheese heads” out there. The beer gives off soft-fruit aromas with a breath of biscuit compliment. The golden-colored ale is naturally carbonated and unfiltered for a soft-cream mouth feel with notes of white grape. Lambeau becomes available on Thursday, January 2 in the taproom for $6 in a 16-ounce pour.

The golden-colored saison has aromas of Juicy Fruit bubblegum, citrus and spice with tasting notes of Juicy Fruit and spice that lead in to a soft body with high carbonation. The one-off beer shares the birth name of Superman, the stalwart protector of Metropolis. When Kal-El becomes available on Thursday, January 2, you can get it for, you guessed it, $6 in a 16-ounce pour at the NoDa taproom. The beer is around until it’s not and is naturally carbonated and unfiltered.

The imperial stout is rich and bold with huge notes of maple syrup, cinnamon and vanilla in the tasting notes which might be why the beer is named after Chewbacca – robust and strong. Available in 14-ounce pours for $6 on Thursday, January 30, the black-colored imperial porter has matching aromas with its tasting notes of maple syrup, cinnamon and vanilla. Expect this one to be a good filler for the winter season.

Keeping with the theme of naming brews after protagonists and antagonists, Bizarro is named after the antagonist, imperfect duplicate of Superman. The hazy gold-colored saison has a mango and tropical fruit aroma that is complimented by funk and spice on the nose. The dry and highly-carbonated finish is led by tropical and funky flavors. Available until it is gone starting Thursday, January 23, you can enjoy the one-off beer on draft for $6 in a 16-ounce pour.

If you would like your brewery’s beer releases noted in our monthly beer release listing, reach out to info@qcnerve.com.