Gov. Roy Cooper rolled out Phase 2 of his administration’s plan to reopen North Carolina on Friday, allowing restaurants to open their dining rooms at 50% capacity, among other changes for businesses such as salons and tattoo parlors. In Charlotte, local leaders are giving restaurants an opportunity to increase that capacity through a new outdoor dining program that temporarily allows establishments to utilize parking spaces and extra sidewalk and street space for dining.

Restaurants wishing to do so can register their business with the City of Charlotte online. There is no permit fee to enter Charlotte’s outdoor dining  program. This program will be in place for 90 days beginning Friday, May 22, or through the full implementation of the Governor’s phased reopening, whichever is sooner.

The number of positive COVID-19 cases among Mecklenburg County residents surpassed 3,000 this week, with 73 deaths due to the virus confirmed as of Friday afternoon.

On Thursday, a 43-year-old resident with no known underlying health conditions died related to COVID-19 infection. It was the first death in the county of someone under 50 years old and someone without any known health conditions previous to contracting the virus. According to a county press release, “This is a somber reminder that residents of any age are susceptible to COVID-19 infection, complications and even death.”

Check out the county’s dashboard for the most up-to-date info and graphics about COVID-19 in Mecklenburg County.

April erased over 570,000 jobs in North Carolina, a loss more than 10 times worse than January of 2009, the heaviest single month of job losses during the Great Recession. Nearly 1 million North Carolinians have filed Unemployment Insurance claims since March 15, when the COVID-19 outbreak began causing major job losses in North Carolina. That means almost 20 percent of the people working before the COVID-19 recession began have submitted unemployment insurance claims, the fastest mass loss of jobs on record.

“The scope of the job losses is simply staggering,” said Patrick McHugh, research manager with the North Carolina Budget & Tax Center. “Job losses are concentrated in industries and occupations that typically pay the worst wages so a lot of the people who lost jobs in April had little or no financial cushion to fall back on. Many of the jobs that have disappeared likely won’t be coming back anytime soon, which means state and federal leaders have to figure out a way to support people through an economic crisis unlike anything in living memory.” 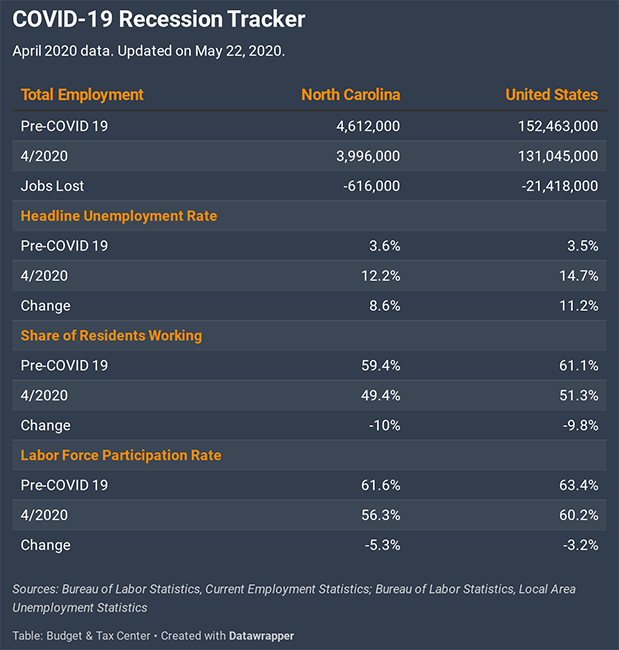 Charlotte Jumps Ahead of San Francisco in Meaningless Stat

Census data estimates released this week put Charlotte at no. 15 on the list of the country’s most populous cities, surpassing San Francisco and moving up for a second time in less than a decade. According to the estimates, the city’s population grew by nearly 20% in 10 years, from 731,400 in July 2010 to 885,700 in July 2019, meaning that on average, more than 42 people moved here every day during that span.

The estimates don’t mean much save for bragging rights between people who brag about odd things, as any government representation policies or other important decisions based on population are made using a city’s Metropolitan Statistical Area, in which we are closer to 22nd, and nowhere near the size of San Francisco.

There are plenty of other important decisions made based on census data, however, and that’s why it’s important for you to fill out your census before the deadline in August.

A boy who was shot and killed during an apparent robbery attempt on Monday afternoon became the city’s youngest homicide victim this year, and the 35th victim of the year in total. Police say 15-year-old Roman Kichigin was working on a car in the parking lot of an apartment complex off Milton Road in east Charlotte when he was shot by a man who was trying to rob him. MEDIC transported Kichigin to the hospital, where he later died. Police later arrested 18-year-old Clifton Stanfill and charged him with Kichigin’s murder, along with robbery with a dangerous weapon and conspiracy to commit armed robbery.