Pushing tacos and nachos to the side, we start pawing through the evidence packet on our table. It seems that world-renowned magician the Great Radinski pulled a disappearing act from his Halloween party last night, only to turn up murdered by an explosive device on the shores of nearby Lake Mystic.

As Sherlock Holmes would say, “the game is afoot.” And the game tonight is to find Radinski’s killer. With a gaggle of seven suspects, all harboring dark secrets, it’s hard at first to keep track of who’s who, much less whodunnit.

Of course, nobody’s really dead, it’s just the Charlotte Murder Mystery Company’s production of Disappearance of Death, one of many plays put on by the troupe of local actors that perform together throughout the year.

We’re at one of 13 tables set on the outdoor pavilion at Treehouse Vineyards in Monroe. As creepy tunes play on the loudspeaker, the Rembrandt sunset darkens to twilight behind one of the venue’s three titular treehouses, an impressive structure suspended in the boughs of what looks like a large oak beside the pavilion.

People depart one table at a time to raid the taco buffet while vineyard cat Ronin scrounges for food. My companions at our table were all strangers just a few minutes before, but now we’re toiling together to get to the bottom of all the skullduggery to solve the crime.

The rogue’s gallery of suspects, all portrayed by local actors, is a murderers’ row of shady characters, all with tongues wedged firmly in cheek.

As in an old-fashioned Agatha Christie mystery, everyone has a motive. Riding herd on the scoundrels, as well as the dinner theater audience, is Della Freedman, portraying Detective Tery, as in Miss Tery, or “Mystery.”

“I guess I’ve always been a detective,” Freedman tells me a few days before the fictitious killing is committed. “I’ve always been able to get to the nitty gritty and put the pieces of a puzzle together.”

Over the phone, Freedman’s voice is instantly recognizable. As WFAE’s afternoon and evening announcer, Freedman has been with the Charlotte NPR affiliate for 32 years and is something of an icon in the Queen City radio world.

“As I tell everybody, I don’t do anything short term,” she says with a chuckle.

It turns out that Freedman is also a businesswoman, and as founder and owner of the Charlotte Murder Mystery Company, her business is murder. She started the company in 2002, she tells me, after losing her full-time job of 10 years.

“I had time to think about what I wanted to do with myself,” Freedman remembers. So, she drew on her background.

The New York City native had studied acting at the HB Studio in her hometown under William Hickey, best known for his Academy Award-nominated role in Prizzi’s Honor. Freedman also attended Queens College — in New York, not Charlotte — where she studied speech and theatre. She has been involved in the local theatre community for several years, working with Theatre Charlotte, The Little Theater of Gastonia, the Davidson Community Players and more.

“I knew a lot of actors in town and I also love to read murder mysteries,” she explains. “I thought, how can I combine all of this?”

At first the company was called All About Town Tours. The plan was to give tours of the city’s neighborhoods, led by actors in costume. Rising gas prices and astronomical insurance rates put the kibosh on that idea, so Freedman pivoted to dinner theatre presentations with a soupçon of homicide. In 2016, Freedman rebranded her company under its current moniker. She’s proud of the fact that her venture is 100% woman-owned and operated, and she tells me that audiences applaud when she imparts that information after each show.

Though the murder mystery field, which was wide open when Freedman started, has since become crowded with rival companies, she doesn’t mind.

“I don’t look at it as competition,” Freedman says. Everyone has their unique way of doing things, she continues, pointing out that there are counless different shoe stores and supermarkets. “If you do your thing well, you’ll continue to thrive.”

Since its inception, the company has done just that, performing in the Carolinas, Alabama, Georgia and at William & Mary College in Williamsburg, Virginia. Freedman is particularly proud of the long-term relationships she’s forged with clients like Treehouse Vineyards.

As a performer herself, she also draws satisfaction from giving fellow local actors a steady and long-standing gig.

Many of the performers portraying shifty suspects have been with Freedman for at least 10 years, and those relationships give Freedman a steady pool of talent that can strike the right balance of hilarity and homicide, providing pertinent clues while lampooning cozy old-fashioned mysteries. The show gives Freedman and her actors an opportunity to hone their craft, she says. In a field where rejection is rife, actors know they have a home with Freedman.

“They have steady work,” she says. “It’s a family kind of thing.”

There are no rehearsals, and Freedman doesn’t direct the show in a traditional theatrical sense, but she is responsible for organizing and orchestrating the murder and mayhem. Once she’s secured a booking, she emails her actors and finds out who is available, then she assigns each performer a role.

The actors, who usually have to create their own backstory when they’re performing in a play, get a completely prepared backstory from Freedman. It’s a double-edged sword for the players. On one hand, each of the actors is spared the painstaking process of character preparation. On the other, they need to know their bio and backstory inside and out.

“You have to be really familiar with it because you’re going to be questioned by the audience,” Freedman explains.

She communicates with the actors in developing a character and the costume, she says, but they’re on their own when it comes to learning their monologue, studying their backstory and getting to the show on time.

By the time each performance begins, the murder has already happened.

“There are not going to be any dead bodies lying around,” Freedman says. “I tell everybody I’m too frugal to pay an actor to lay on the ground for two hours.”

She also never tells her cast who the guilty party is. That’s because, although the characters are exaggerated, the actors play the material for truth just like they would in any other show, Freedman explains.

“It’s an acting gig, and [they] have to come across as believable for the full two hours that we’re doing it,” she says.

The job isn’t as easy as some may think, she continues.

At the Treehouse Vineyard, Ronin is curled up in a corner after scoring several snacks. As Detective Tery, Freedman is a mix of master of ceremonies and major domo, wrangling audience members she believes to have scant attention spans.

With a combination of mild snark and wisecracks she keeps those patrons on task to solve the mystery. When it comes to cracking the case, I recall a helpful bit of advice Freedman gave me: “Several of [the suspects] may have a motive but you have to figure out who had the opportunity.”

This nugget of information helps our table to identify the killer, even though we miss the motive by a country mile.

Next up for Freedman’s company is a Thanksgiving-themed mystery. Gobble Gobble Death and Trouble, which goes up at Treehouse Vineyards on Nov. 24 and concerns the untimely demise of a famous chef with a jealously guarded turkey recipe.

“He doesn’t want anybody to steal [the recipe], but somehow and some way, his kitchen explodes and he dies,” Freedman says.

Suspects include a sous chef, a floral arranger, a horse farm owner and many more nefarious characters.

After that, ‘Twas the Night Before Murder will bring more culprits and carnage in December.

“It’s a great way for people to get together and have a good time,” Freedman says as she explains the enduring appeal of murder mystery theater. “It’s something you can tell people about — ‘Hey I solved this!’ And you’re working with other people. Sometimes you don’t know who they are, so you meet new people.”

“If you’re breathing and you like to figure things out, then this is good for you.”

After all, you never know when or where a murderer might strike.

The Suffragist: Remember the Ladies 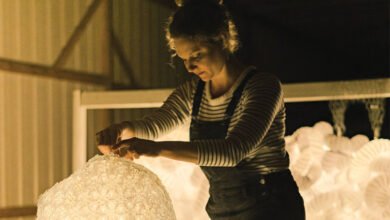