On Nov. 26, the nation will be introduced to Charlotte chef Chris Coleman when he appears as a contestant on Food Network’s competitive cooking show Chopped, but those familiar with the local food scene have been familiar with Coleman for quite some time.

The Queen City native began working in restaurants at 14 years old, and by 21 had already been named head chef at McNinch House Restaurant in Fourth Ward. Since then, he’s helped open The Asbury at The Dunhill Hotel, and Stoke at Marriot City Center. Now Coleman is branching out to start a project from scratch: The Goodyear House, which he will open with owner A.J. Klenk and serve as executive chef in three to four weeks.

According to the episode description of tonight’s “Meat Fight” Chopped episode: “The four chefs must cut jumbo-sized ribs down to appetizer-appropriate portions in the first round. A premium steak and a second-rate grocery store meal meet in a puzzling entrée basket, and creativity and a shining example of good sportsmanship are on display in the dessert round.”

Before all that happens, we spoke to Coleman about his big spotlight moment and what’s important to him in the kitchen.

Queen City Nerve: You became head chef at McNinch House at a relatively young age. How did you get to that point so quickly?

I’ve been working in restaurants since I was 14. When I was around 16 or 17 years old, that’s when I started expediting in the kitchen I was working at. Before that I’d just been a waiter or at the front, but expediting actually got me into the kitchen. I learned how a kitchen moves, flows, operates. I really fell in love with it. I was going to Central Piedmont Community College [studying] culinary arts and started working at McNinch House when I was 19. I was kind of an assistant in the kitchen; it was a really small kitchen so there was a very small staff. The chef left shortly after I started there to open up his own restaurant. The owner and original chef, she took me under her wing and trained me for a couple years. It reached the point where I was running the restaurant. When I turned 21, it was right about the same time I was graduating from culinary school. She gave me the title of head chef. So I was running that kitchen and running a staff of people at age 21.

I stuck around at McNinch House until I was 29. I left to become the culinary director for The Dunhill Hotel, and while I was at The Dunhill we opened up The Asbury. This was the very beginning of 2014. We had a really, really good team there. In 2016 I got phone calls from two different folks who thought that I should check out what the Charlotte Marriott City Center was doing, because they were looking for what they call a director of culinary experience, which come to find out is just the fanciest thing ever. So I checked it out, it seemed like a really cool opportunity … and in a few months we opened Stoke [restaurant] and Stokes Bar.

I did that for two-and-a-half years or so and then got the itch to do my own thing. So I partnered up with A.J. Klenk and Sean Potter. A.J. was in the process of building out this 120-year-old mill house in NoDa into a restaurant property. I love NoDa. I used to hang out here when I was in high school and I always wanted the opportunity to open a restaurant in this neighborhood.

Can you describe for us what the new restaurant will be about?

It’s a true neighborhood restaurant for the NoDa community. We love NoDa. I guess that I grew up close to there 20 years ago when I was in high school and I’m happy to be back. It’s a fun neighborhood and I love exploring the murals. The restaurant is a 120-year-old mill house — one of the first houses built in the neighborhood. We’ll be open for lunch and dinner and just serving some classics there, but updated for the modern diner.

What are you most excited about for The Goodyear House?

How were you first informed of your opportunity to be on Food Network?

While I was still at Stoke, somebody from there reached out to the PR team at Stoke and were wondering if I would go through the application process. I’m not really a cooking-show person but I loved the challenge of the show and I always thought that, if the opportunity came up to do the show, I would do it.

So you weren’t a Food Network fan before this experience?

No, I wasn’t. It’s not that I disliked what they were doing or anything. I had looked at some of the shows. I liked Chopped; it’s one of those first [competitive] shows, kind of like Iron Chef.

Are you hopeful that television exposure will boost your career?

I don’t know that I’m necessarily hoping that it will do anything for my career. I’m pretty happy with where my career is at right now. I did Chopped because it’s a show that I enjoy watching and a show that I think is challenging to cook with quick thinking skills. I did it more for the challenge. I think it will be fun to see how the show is edited. It was a lot of fun to compete on, it was a lot of fun to shoot. I enjoyed meeting the three other chefs and becoming friends with all of them through this experience. For me it was just a fun thing to do.

Do you feel like you represented Charlotte well in the show?

I do know … and I made this point while I was filming Chopped … Charlotte as a whole is full of people who are more talented than I am and that we often get overlooked for bigger cities like Atlanta or more important food cities like Asheville. Charlotte’s got a really awesome culinary scene and I’m happy that I was able to represent Charlotte on Chopped. If I do anything else in the future, I’ll be accurate in representing Charlotte then as well.

Speaking of representing Charlotte, you’ve always put a lot of emphasis on local ingredients. Why is this an important part of your job?

That’s important to me because shopping local is cool and all, but it’s really about building relationships — if I can shake the hand of the people that grew the food or raised the meat or caught the fish. It’s just important to me to know where my food is coming from; not so much in a sense of location, more so that I’m meeting these people who are dedicating their lives to producing food that we should eat in a sustainable way. I know that I’m using my dollars to help them continue what they love doing, put their kids through college and buy school supplies. For me it’s all about relationships and the food is also really kinda tasty.

Do you see these values of community and sustainability in the food industry often or do you believe you are an outlier?

I see it a lot in Charlotte. I don’t know if it’s in the industry as a whole but I know that in Charlotte, it’s a big thing. I’m a member of the Piedmont Culinary Guild, which is a group of a little over 300 people now. It’s all chefs and farmers and food media. We really believe strongly in promoting Charlotte as a strong culinary community, and that means that the chefs buy from the farmers, support your food media members and they are in turn writing about us. [Queen City Nerve is not part of the Piedmont Culinary Guild.] It adds to that cycle of: I will support your business, you are supporting my business and we think it’s the right thing to do. We feel strongly about helping each other out. We have a motto that “All Ships Rise”. It’s about relationships

You are one of those rare Charlotte natives. Is that focus on relationships what made you want to stay and set up your career?

What made me want to stay is my life. I got married young. I was 20 and I married my high school sweetheart. I believe that it takes a village, and our families are here and we like Charlotte. Charlotte’s a great place to live. The weather is usually pretty nice. I love hanging out in the city and there’s just a lot of stuff to do. The culinary scene is getting more and more vibrant every year. It just seems like a nice place to raise a family and we have kids now so … we just like Charlotte.

Would you ever consider working in another city?

'The Play That Goes Wrong' Adheres to a Controlled Chaos

Get Fit with Britt: A Holiday How-To 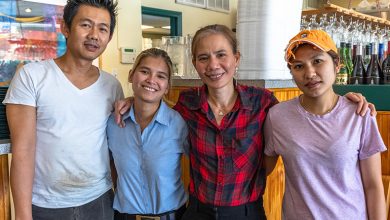 Lang Van Vietnamese Back on Stable Ground After Pandemic Struggles