When Christine Edwards moved from Norfolk, Virginia, to a multiplex on Central Avenue in east Charlotte as a child in 1995, she had everything she could have asked for.

“It was just me, her and my brother, and I didn’t realize that we were lacking because it was just us,” she recalls. “We were able to walk to school, our neighborhood felt safe, it was just such a nice community.”

Edwards attended the now-closed J.T. Williams Middle School in north Charlotte, then got into Harding University High School in west Charlotte through the school choice lottery. Her experience there was a great one, but since graduating in 2006, she’s watched as Harding has become more segregated and resources there have become scarce.

Her experience at CMS, and what she saw happen after she left, inspires a lot of the work Edwards does today as a community relations director with Mecklenburg County, where she works closely with the student-led Charlotte-Mecklenburg Youth Council. Recently, she founded Amplify Charlotte, an organization that aims to connect underserved community members with civic leaders and get them engaged in local government.

On March 30, Edwards will host the first Amplify Charlotte Civic Engagement Pop-up Shop at Advent Coworking. In the lead-up to the event, we talked to Edwards about how her experience shaped her community work and what she wants to accomplish with Amplify Charlotte.

Queen City Nerve: Why are you so passionate about getting people engaged with local government?

Christine Edwards: That’s so important because there are 65 people moving to Charlotte every day, and if you don’t take control or if you don’t play a part in the way that your community is being shaped, then it’s going to be shaped for you. That’s why I think it’s everybody’s responsibility to do that and I think it’s important for the next generation to have something in place for them. That’s why it’s important to me. You have to own that.

Does that inspire the work you do with the county?

With the county, the main difference is the city takes care of the city’s infrastructure: the streets, sidewalks and lights. So basically they are the hardware that makes our community work, but the county is like the software, so you kind of have to take a different approach when you are engaging on that level. So for me that meant I had to go out and make friends and keep friends in the community. Because there’s not a number that you call. For city services, if you want to fix something, you call 311. On the county side, you have to have those relationships and you have to know who to call for what. So I wanted to be that person, I wanted to be that resource for CLT, just keeping an ear to the community and hearing about what’s going on that I can help.

From what I can see, you’ve been successful at it. For example, I’ve seen you at Let’s Talk Dammit, an event hosted by Dammit Wesley that is geared towards engaging black artists and connecting them with resources they need to be successful. I don’t see many local government reps at those types of events.

I’m at Let’s Talk Dammit because I happen to hang around Camp North End and I’m listening to the artists and they’re saying, “Well, the policies and restrictions, we can’t do our art, we can’t earn a living, and basically Charlotte and Mecklenburg County is not a good place to live.” That doesn’t mean I go back to the county manager and say, “Listen, we need to lift these restrictions on our murals in the city,” no, it just adds to the conversation so that when I go in other rooms — say for example I know somebody on the ArtPop committee or something like that — I can say, “You know what, we actually have a really, really active artist culture.” Basically, I’m just adding to the conversation.

How did your experience in CMS play a role in your current work with Meck Youth Council?

I think having that experience, growing up in Charlotte and now watching these kids do what we couldn’t do — it’s just a different time now and watching them blossom into these community leaders is so rewarding for me.
I went to Harding and I know what a good school it was, and then when I graduated in ‘06, I don’t know what happened. Then they closed a number of schools; they closed Waddell [Language Academy] for a period of time, they closed J.T. Williams and turned it into Turning Point Academy behavioral school and when those changes happened it changed CMS, it changed the school system for the worse and it made us go back in time. Are we progressing or regressing?

So being around the Youth Council kids and seeing how smart and active they are, it really inspires me and it just makes me want to do better for them. I was working with [Youth Council member] Britney Dockery, and that’s really what struck me because I keep seeing their names in places. Sometimes at work I say, “I’m going to go to this council meeting tonight and it will be fine I can go home and stop thinking about it,” but then when I see their names again, I’m like, “These kids are everywhere.” I can’t credit myself for that, but just paying attention to what’s going in their own activism, I get inspired by their activism.

When did you launch Amplify Charlotte?

It started in June 2018, and I was fortunate enough to win a grant fellowship through the Emerging Cities Champions Challenge funded by the Knight Foundation. I had the idea in my head before 2018, I actually submitted an application in 2016 for the same grant program and I didn’t get in. So I learned from that and I said, “You know what, this has to be targeted, it has to be focused, it has to be very specific.” So I went back to the drawing board and said, “How can I tweak the program in order to get my foot in the door by winning the grant?” I felt that kind of gave me the push that I needed to get it off the ground, too.

What do you hope to accomplish with the organization?

It is a program that helps amplify people’s voices in the community and the way that we do that is through our “Civic Kit.” It’s actually a tool kit. It’s a box with a lot of different city and county and nonprofit resources inside. The idea behind the kit is you have this grassroots piece of engagement infrastructure that you can pass down to the next person. A lot of time when we organize, you have one leader, and they have it all in their head, or they’re super experienced in what they do — whether it be leading a neighborhood or maybe they’re the HOA leader or a church leader or perhaps a Democratic precinct — but when that person leaves, the leadership kind of falls apart because you don’t have that information that’s passed down. The tool kit contains general info on who to call for what for city services, and it also has an original curriculum that I came up with based on three things: voice, representation and change.

The second part is representation, and that’s about getting a seat on a city or county board or committee, and it’s also about making your government representative of you. So it’s about voting and sitting on committees and making the committees more diverse and representative.

And change is about making changes at the neighborhood level. So that is about kick-starting a community project. So this curriculum is wrapped up in a handbook, the handbook is in the box. There’s also a website with these resources on it, as well. Right now it’s just a bundle of resources and I don’t really have a distribution method. All I’ve been doing lately is I’ve been going to these pop-up events. For example, Project LIFT will have a community event and I will have a table set up where I will give out the kit to people in the community and then I give them a survey and they let me know what they think about the kit, are they going to use the kit, etc.

But now you’ll be hosting your own event.

On March 30, I’m hosting my own pop-up event. This is going to be the very first Amplify Charlotte civic engagement pop-up and it’s a big deal because I’m going to be giving out these civic kits for free, everybody will get one, and I will be able to realize the vision of why I did this. I’m not working with any particular group or neighborhood, it really is for everyone to come and benefit from it.

The event is all about engaging with Charlotte’s crescent, and I know we want to stay away from that word, but it’s just a reality of how our city is set up. The crescent is that area that’s close to Uptown and you have those streetcar neighborhoods to the east, north and west of Uptown, and these neighborhoods are known for having lower incomes, lower educational attainment — I was going to say lower home value, but not anymore because that is some prime real estate — but what I’ve noticed in my work is that the neighborhoods near and around the center city are super engaged, they’re very active, right? And so I’m tapping into a community that is already activated, and they already have an appetite for what I want to offer them. So hopefully what I’m offering is going to add on to what they’re doing.

What else can people expect at the pop-up?

We have about 12 vendors so far, and I’m really excited about. There’s two vendors I’m super excited about; one is the Charlotte 2040 Plan. They have launched this comprehensive plan to design and envision Charlotte in the year 2040. I’m going to have that team there, and they’re going to be taking feedback on values and visions that people think of Charlotte, the values and visions that you want to see in the next 20 years. So I am happy to have them in the room so people can come and actually contribute, you’re actually contributing to what our community will look like in 20 years. 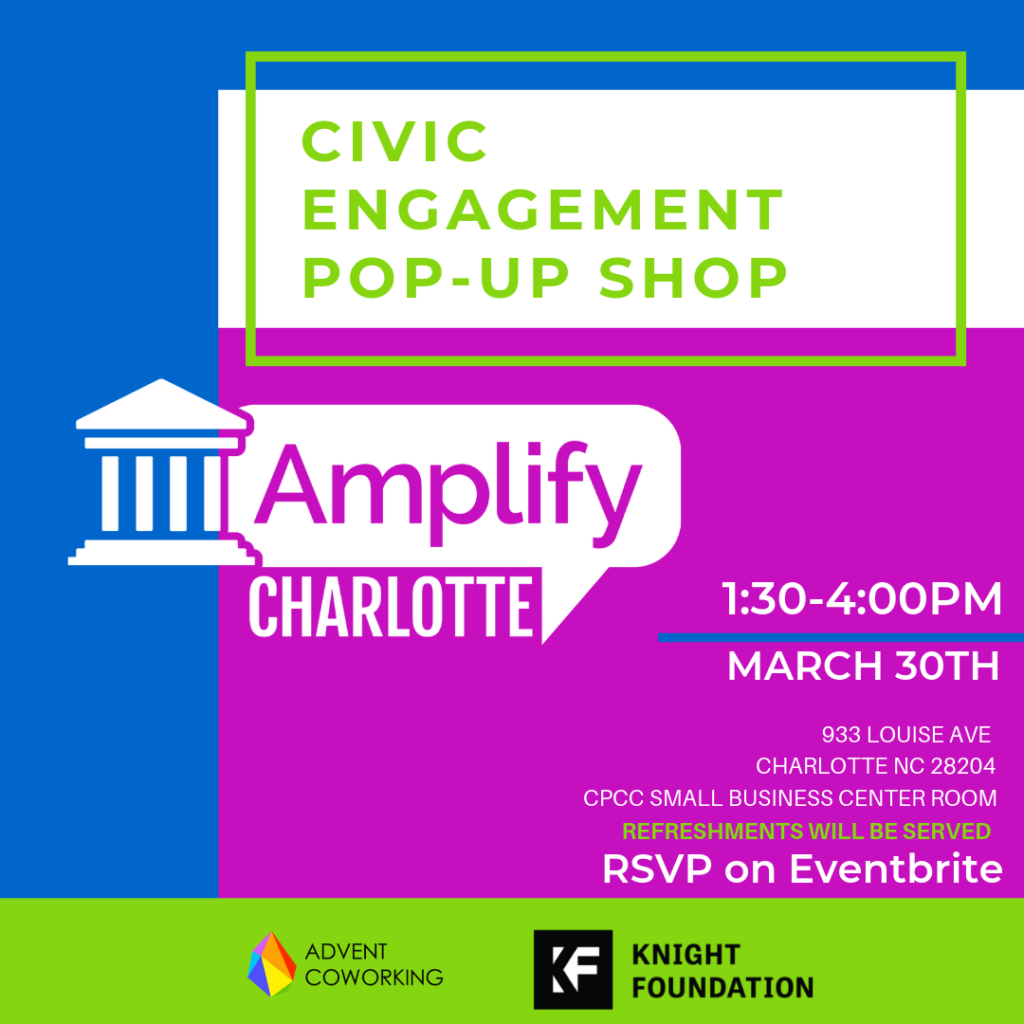 Indie Games and Graffiti Bring us Back to the Basics