Charlotte City Council on Monday approved a new budget for the fiscal year 2021, including an added motion from council member Braxton Winston that will prohibit police spending on maintaining the department’s stock of chemical agents used to disperse protesting crowds or buy any new ones.

Winston began publicly pushing for the change only four days before the meeting in response to the use of the “kettling” tactic by CMPD officers caught on tape by Queen City Nerve trapping peaceful protesters in a city block using tear gas and firing on them with pepper balls from above. His motion directs the city government “not to spend money to acquire new or maintain existing stocks of chemical agents used for crowd control and dispersal in fiscal year 2021,” while also creating an oversight committee to scrutinize police spending and policy.

In a speech given just after he introduced the motion, when many council members had already voiced their preemptive approval of it, Winston emphasized that the banning of tear gas and other crowd dispersal agents was only the beginning. “For the allies, we need you to keep the same energy tomorrow morning that you have displayed for the last two weeks,” he said. “The only way that your elected reps on this dais will keep the political will to continue down a path of transformative change is if you keep the pressure on us.” 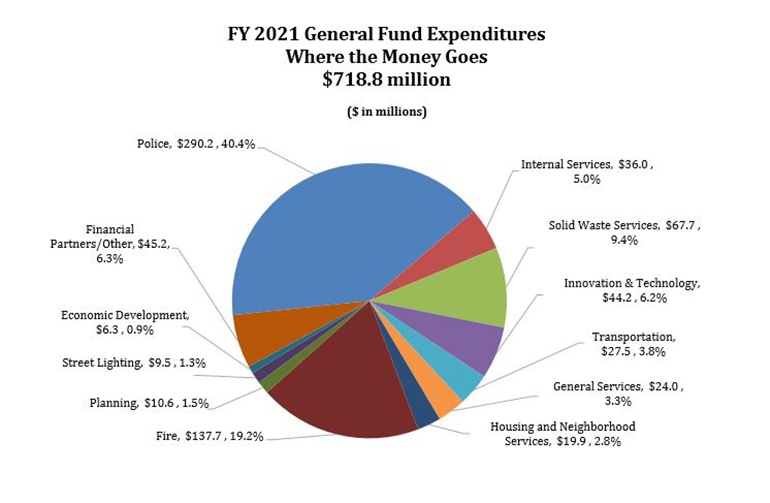 According to CMPD Deputy Chief Johnny Jennings, who will replace current Chief Kerr Putney when the latter retires in September, the department spent around $103,000 on chemical agents such as tear gas in FY 2020, though it changes year to year. Council member Renee Perkins Johnson suggested that $103,000 from the budget be moved into affordable housing or some other community-related spending rather than allowing the police department simply to spend it elsewhere.

Of the city’s nearly $719-million approved budget, more than $290 million, or 40%, is allocated for police spending.

The city council approved the budget with the only dissenting votes coming from the council’s two Republicans, Tariq Bokhari of District 6 and Ed Driggs of District 7, both of whom called Winston’s motion “hasty” and voiced concerns that it was designed to quickly placate protesters rather than deal with bigger issues.

Driggs even questioned the source of the motion, stating that considering Winston’s past relations with police, he thought the motion was just a “dig” at the department. Winston won his seat on the council in 2017 after taking part in the Charlotte Uprising protests of 2016. On May 29, he was arrested at the first George Floyd protest in Charlotte and charged with refusal to disperse.