Traveling to Europe by air, you may have seen the animated maps that flash onto the seatback screens facing you, orienting passengers during the flight as your pilot followed the great circle route over the Atlantic. At the very eastern edge of North America, you’re likely to notice the name of Gander, a Newfoundland outpost oddly mixed among the names of larger, more familiar cities.

When all of North America’s airspace was shut down following the terror attacks of September 11, 2001, as 38 commercial and four military flights were diverted to Gander International Airport, it was the next-worst thing to forcing more than 6,600 civilians and soldiers to wait it out on the ocean. Passengers almost had to bid America farewell. It was no picnic for the citizens of nearby Gander, either, who suddenly discovered that their airport had been transformed into a major immigration hub — while the population of their sleepy town mushroomed by over 66%.

Yet somehow, the hubbub sorted itself out beyond all expectations. When news hit of the warm-hearted welcome that strangers were experiencing in the wilds of Newfoundland, it was a feel-good story that broke through a tsunami of anger, grieving, finger-pointing and Islamophobia — a little island of hospitality in an ocean of hostility.

Sixteen years later, when Canadian husband-and-wife team Irene Sankoff and David Hein retold the story in a Broadway musical, Come from Away, the time was ripe for the Gander love-in to strike a nerve once again. When the show opened for previews in mid-February 2017, less than a month after President’s Trump’s inauguration, an infamous Muslim ban had recently gone into effect, a thousand-mile Southern border wall was still a political imperative — most intensely among small town rustics, it seemed — and a wave of anti-immigration sentiment was sweeping Europe.

In that climate, Come from Away must have seemed like a rallying cry, hearkening back to a time when Christian values hadn’t devolved into ’round-the-clock xenophobia. This week, as the touring version of the Broadway hit rolls through Belk Theater, there hasn’t been a politically-charged photo op from an internment camp in recent memory. Iran, Ukraine, Russia or our pathetic Panthers are more likely to inflame our passions than any imminent threat from Guatemala.

We’ve turned the page, right? I wondered if the warmth of the quirky Canadians and their spontaneous connection with a global hoard of uninvited guests would still resonate, especially when the storytelling turned out to be so objective, bland and non-confrontational.

As studiously as Sankoff and Hein avoid controversy, analysis or agonized post-mortems, they do go into admirable detail about the logistical challenges of accommodating thousands of detainees in the middle of nowhere.

Pandemonium may have broken loose near Ground Zero, but airspace across the continent was in virtual lockdown, security precautions around aircraft especially tight. Our first peeps inside a passenger cabin, as planes languish on the ground until proper processing can be set up, show us people going stir crazy during the 28 hours they must wait before deplaning — separated from their checked luggage in an information blackout. 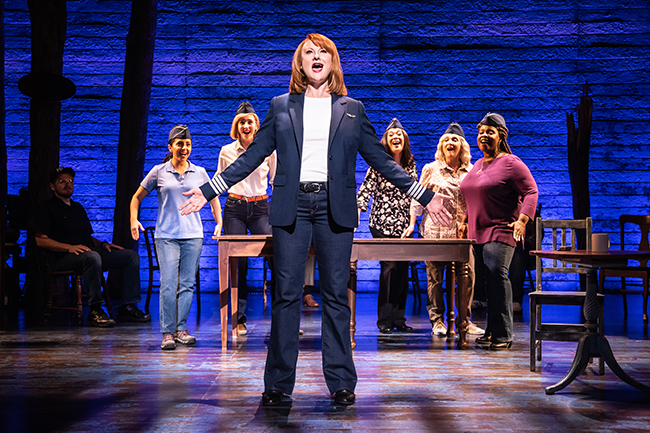 Raiding their supply cabinets and freely handing out booze is one remedy a crew might try to ease the tedium, even if it doesn’t altogether restore quiet and calm or appease the claustrophobic crone in the back row. Twelve actors draw the task of simulating all the global passengers and all the Newfoundlanders involved in this massive coping drill, so there’s an electric bustle as the actors switch from their traveler roles to townspeople.

While the passengers hovering over airstrips are disoriented, experiencing the surreal, on the ground in Gander, the impact is comparable to a benign invasion suddenly hitting. An ordinary day that begins with the mayor ordering up his customary cup o’ joe at Tim Horton’s is no longer pre-programmed. Instead of meeting with the leader of the school bus drivers to negotiate an end to their strike, he’ll be soliciting cooperation from this foe in transporting over 6,000 foreigners from the airport to town.

Elsewhere, a school teacher will need to take charge of opening an emergency shelter and breaking the news of the attack to the passengers. Feeding, washing and bedding all these travel-weary people must also be managed. The newcomers speak a host of languages and have a host of unforeseen needs — including kosher meals — and helping so many to simply check in with friends and relatives, by phone or by email, is a formidable challenge. It is almost comical when a local SPCA worker pops up, concerned about the plight of the cats, dogs and monkeys stowed in the belly of the planes with the cargo.

In short, there’s a multitude of practicalities in the hurly-burly of this 100-minute musical that largely distract us from the two main things: the massive kindness that the Newfies showered on the newbies, and the massive changes to our world that came with the events in Manhattan, at the Pentagon, and aboard Flight 93. A few of the passengers remind us of the big picture. Beverley, a pilot, and Hannah, a mom, worry that loved ones may have perished, and there are multiple hints that the seeds of Islamophobia have already started germinating.

Otherwise, life goes on. Kevin T. and Kevin J., a gay couple with personality differences, may or may not break up. A Texas woman and a British guy may get together, overcoming wariness, shyness and the brevity of their acquaintance.

We aren’t deluged with one-on-one kindness from the friendly natives, but there are choice examples. The teacher, Julie Johnson as Beulah, bonds with Danielle K. Thomas as Hannah because her son is also a firefighter. Two Kevins walk into a Gander bar and find that their fears of Laramie homophobia are groundless — they’re accepted warmly and instantly. A nearby mayor invites the wary Bob to his home, opens up his liquor cabinet to the stranger, and helps him overcome his fear that he’ll wake up tomorrow without his wallet. Or how about the local store clerk? After thanking a first-time customer for shopping at Walmart, she invites the woman home to take a shower.

Beginning with “Welcome to the Rock,” most of the songs in the score are sung by the entire ensemble, choreographed with the right kind of vivacity by Kelly Devine, so we often get a sense that we are watching an energetic community response after all. With a script that doesn’t have the Twin Towers, al-Qaeda, radical Islam, Osama, or even terrorism prominently in its vocabulary, that communal energy seemed to be the most potent reason why Come from Away connected so viscerally with the near-capacity crowd at Belk Theater on opening night.

While there are plenty of feel-good experiences to be found in our current media landscape, including synthetic fantasies of communities bonding together and accepting one another, Come from Away comes to us at a time when we seem hopelessly fractious and divided, digging in against each other instead of helping each other out. And the comity of Come from Away strikes us as very real, very possible — and as a rebuke that isn’t saddled with a party label.

After the opening ensemble, there isn’t much in the Sankoff and Hein score to keep us airborne until we reach “Me and the Sky,” a showcase for Beverley, who turns out to be first female airline pilot at American Airlines. Marika Aubrey ably takes the controls here, counterbalancing the levity of the barroom scene that precedes. In that episode, we get the most genuinely communal spectacle of the evening, presided over by Kevin Carolan as the mayor. 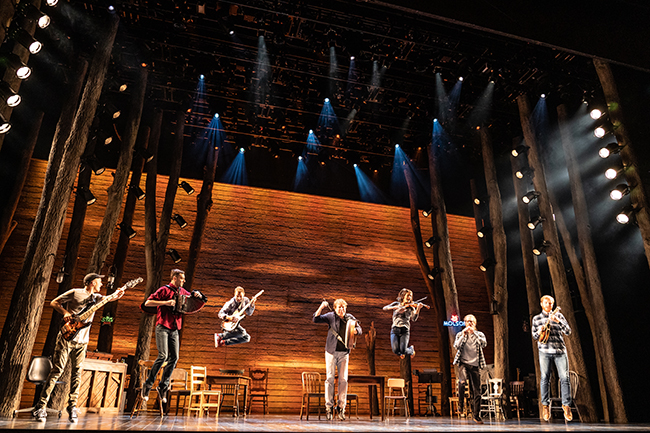 While visitors get the opportunity to be initiated as honorary Newfies, Andrew Samonsky as Kevin T and Nick Duckart as Kevin J. get to define their differences, while Chamblee Ferguson as the Brit and Christine Toy Johnson as the Texan get to share their first sloppy kiss. A local liquor called Screech lubricates the zany ritual, along with a freshly-caught codfish.

Others in the cast who make an impression come across as the youngest — and maybe as surrogates or prompters for us as we watch. James Earl Jones II as the skeptical Bob registers his wonder at Northern hospitality most tellingly and holds our attention after he and his fellow passengers have returned home. When she isn’t clerking at Walmart, Julia Knitel is most notably a cub reporter on the local TV station, faced with the ginormous cataclysm of 9/11 on her first day in the field — lanky, gawky and adorable.

Sharone Sayegh may just be even more adorable as the SPCA zealot so mindful of the animals when all of humanity’s minds are elsewhere. No doubt about it, Come from Away comes to us with plenty of heart. Question is, will we come to Belk Theater to escape what we have become 18+ years later, or will we come to experience a reckoning? No matter which, audience reception on opening night seemed to hint that they had felt an unexpectedly positive vibe – an affirmation that, in the face of so much division and adversity assailing us, we can be better.

Charlotte Brewmaster Becomes One of World's Only Master Cicerones