When Lavonte Hines organized the first For the Love of She event at Snug Harbor in August, he wasn’t sure who would turn up on a rainy Tuesday night. But when more than 100 people came through to show love to the queens of the Charlotte scene, he knew he had tapped into something people were hungry for.

“I wanted to give the ladies a safe place to come and have fun and just have a good time, to showcase the female talent in Charlotte because there isn’t much of a scene for the female MCs and singers in town,” said Hines, also known as DJ FLLS.

While there may not be many shows that specifically spotlight the women doing big things in Charlotte’s music scene, there’s no shortage of women to spotlight. That’s why Hines is coming back for the second iteration of For the Love of She at Snug Harbor on Saturday, Dec. 22, featuring a new slate of female performers that will keep those August vibes going into the holidays and new year.

For Scott, who also helped organize the first event, the diversity in genres is what makes the night special.

“Lavonte did a really good job curating the show to build different kinds of vibes,” Scott said. “He never goes for just one straight thing. He did a really good job [at the first show] of bringing in a little R&B, a little funk, a little soul, some chillwave, a lot of dance vibes, so everyone was really engaged and that’s the same thing that he was going for this time around.”

Scott, who’s known Hines since childhood and works with him regularly on events like Repainted Tomorrow, said this show is close to her heart for obvious reasons.

“As a woman who is involved in the music and art scenes here in Charlotte, it’s really wonderful to be able to bridge the gap and create something to shed light on all the many women who are doing things,” she said. “Because there are a lot of women in Charlotte who are doing things creatively but sometimes they don’t get the shine that they deserve. Sometimes it’s a little bit inaccessible.”

As the August show proved, there’s plenty of folks ready to support when the ladies of Charlotte come together to perform. And Hines isn’t slowing down; he’s already got his eyes on a third iteration of the show in March.

His drive is a reminder of what he told me when I asked about how he decides on lineups for each show.

“You always want to keep it fresh, you know, you want to keep people on their tippy toes like, ‘Oh, what’s coming next?’” 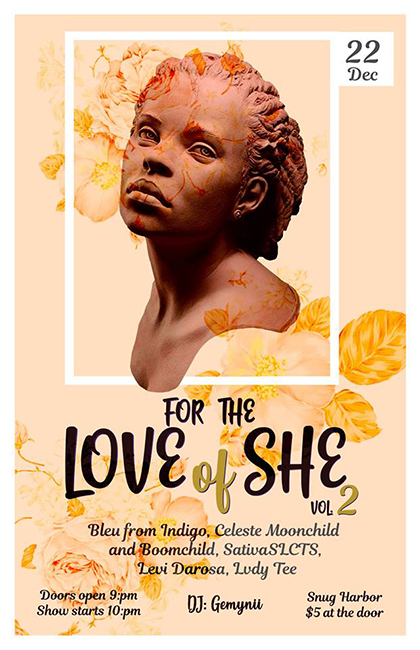 Lucky Five To Reunite for the Holidays