“What would the Native Americans think of this?”

That was a question my dad used to pose to me when faced with some awe-inspiring thing. The question was meant to reference indigenous people who lived on this continent before white people arrived, not their descendants whose reservations we would regularly visit.

He might be speaking literally about something those folks absolutely did experience, such as a big lightning storm. With me going through a long childhood phase in which I studied Native American history closely, I could sometimes answer. But he often meant it rhetorically in the manner of a would-be time-traveler (The Indian in the Cupboard was a favorite of mine at the time.). He meant, “What if they could see what’s happening now?”

In that case, he would pose the question in regard to something magnificent or tragic. I say all that to bring us into the present, because a similar thought has been bouncing around my head over the last week in regard to situations we’ve seen play out that are both magnificent and tragic.

As I write this, a large mural is spread across a city block on South Tryon Street reading “BLACK LIVES MATTER.” The city paid 17 local artists to paint the mural. City officials then shut down the road to traffic after some asshole peeled out across the entire thing in his cowardly way of giving a middle finger to the movement (we see you, J.D. Goodman).

Regardless, artists came back to the site on a recent Sunday and touched up the mural, and it’s served as inspiration for countless community members and families since its creation. As Clarissa Brooks points out in this issue’s op-ed, it’s going to take a lot more than paint on the street to make change, but it’s an encouraging show of support. 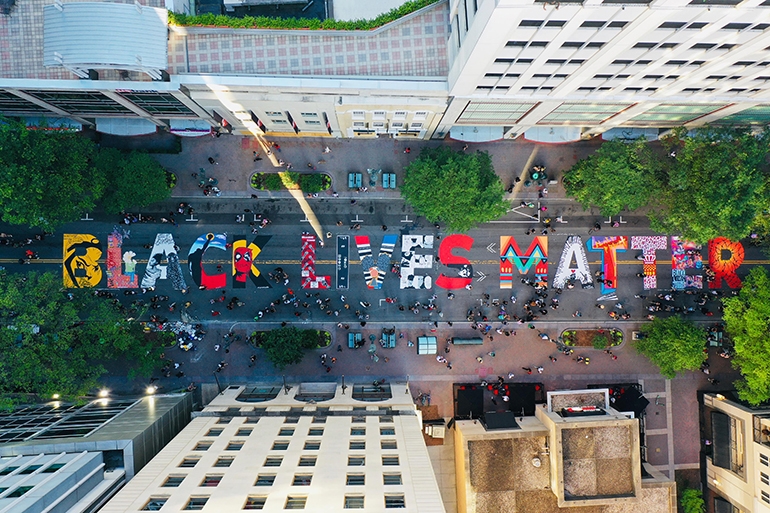 Never in its 200-year history has Charlotte seen what we’ve seen over the last month, and I can’t help but wonder how some of the people who were once in power might view that mural on South Tryon Street.

The old Charlotte elites and the New South

Most immediately I thought of a reaction from Mary VanLandingham, wife of leading Charlotte cotton broker John VanLandingham, as quoted in Tom Hanchett’s must-read 1998 book, Sorting Out the New South City. In the local elections of 1896, during which the newly emerging Fusionist party brought Black residents together with mill workers and gave true voting power to the working class, the racist Democrat party of the time lost every countywide race and most in the city.

“Irreverence is one of the tendencies of the age,” Mary responded upon hearing the results. “It is liberty run mad.”

Later, an article reprinted in the Charlotte Observer in 1897 stated, “Many of our people are waking up to the fact that young negroes of today are going to school and preparing themselves to enter into competition with their white neighbors.”

White party leaders and power brokers capitalized on that anxiety in the years to come and used racial fear-mongering to divide working class whites and their Black neighbors, in a cycle that we’ve seen play out in different ways for more than a century.

Put white supremacy on the retreat

And now in 2020, seven years into the Black Lives Matter movement, Black Americans are done waiting around to see if this year, this decade, this century might be the one in which the white ruling class treats them with respect.

There’s no time for respectability politics anymore, and folks will continue to march as they have through Myers Park, South End, NoDa, Dilworth, Waxhaw, Huntersville and Mooresville. The only place I haven’t seen them march yet this month is by the VanLandingham Estate in Plaza Midwood, ironically enough, but I’m sure that’s coming soon.

When I spoke with local rapper Mason Parker for this week’s music feature, he wrapped up our conversation with some important observations about these most recent protests as compared to unrest that our city has seen in the past.

He pointed out that there are more white people than ever who are ready not to passively voice their support from the sidelines but to go out and march — to stand on the right side of history.

“I have never seen such a surge of white consciousness and that’s something I don’t think anybody’s seen. This is some new shit,” Parker said.

What sacrifice are you willing to make?

I think, unfortunately, this plays a role in the willingness of city leaders to pass laws and ordinances against tear gas. You can’t have folks that look like me out here getting gassed, it’s a bad look. In that role, white allies are important, but then he pointed out an inconvenient truth: Whether these white folks will take that next crucial step even as change begins to affect their own lives is key.

“The true test is going to be when it becomes uncomfortable, because it is going to become uncomfortable very fast. Because there’s a power shift, and if you’ve been living in a system that is tilted to your favor, even if it’s unbeknownst to you, and you’ve been comfortable in that system, it’s like being born again. You was in the womb and you was chilling and all the sudden the doctor smacks you on your ass and you’re like, ‘What the fuck, I don’t like this, I’m uncomfortable,’ and it’s going to be an issue adjusting to true equality.”

Black Lives Matter protesters will continue to make folks uncomfortable until real change is made, and the momentum is on their side like never before. They feel no need to ask that we grace them with our reverence.

In fact, irreverence is one of the tendencies of the age, and it’s working.

Visit here for past Editor’s Notes.

Opinion: CMS Continues to Fail Its Students Through Segregation