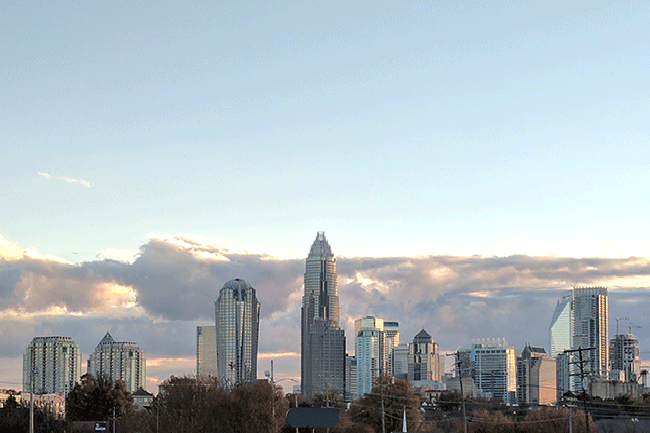 You’d think from watching the national news that we are right on the verge of a presidential election. Nope. There are still hundreds of debates to go in that race — not to mention a terrifying convention right here in Charlotte — before we get to that vote. However, we here in the Queen City are officially in Election Season, as early voting has already begun for local primaries. That will run through Sept. 6, and you can check here to find out where and when you can do that, or hit your assigned polling place on Sept. 10 to do your civic duty. We won’t be making any endorsements, but we did put together this handy guide for you to check out before you hit the polls.

Amid a plethora of city council primary elections, this leftover 2018 race is the big kahuna, a special election for the 9th District’s U.S. House seat that has drawn national scrutiny. To recap: In the 2018 election the district was called for Republican Mark Harris until allegations that his campaign committed election fraud sent the results to state officials. The state ordered a do-over and Harris subsequently retired due to “health problems.” We were sick of him, too.

This is the second time in less than a year that McCready has been on the ballot for the district. A Marine veteran, McCready signed up after 9-11 and served in Iraq where he attained the rank of captain. The father of four has promised “to always put country over party,” and pledges to pursue bipartisan legislation on a comprehensive healthcare plan, lower taxes for the middle class and education. Last month, McCready laid out a plan that would encourage young Americans to undertake a year of national service. McCready hopes the program will unite the country and make Americans better citizens. At press time he’s tied neck and neck with his opponent in the polls.

A “pro-life, pro-gun, pro-wall” conservative, who’s fond of labeling Democrats “radical socialists,” Bishop is busy backpedaling from an investment he made in the white supremacist-friendly website Gab. He boasts of opposing sanctuary cities and helping to pass North Carolina’s discriminatory 2018 voter ID law when he was in the state legislature. But Bishop’s proudest achievement is HB2, the transphobic “bathroom bill” that cost the state at least $3.7 billion in lost revenue until it was overturned. Bishop reacted to the law’s repeal by comparing LGBTQ activists to the Taliban. On Aug. 22, President Trump tweeted that he will soon be attending a rally in North Carolina to support Bishop.

Vi Lyles – Coming to the end of her first term, Mayor Vi Lyles is poised to easily win a second, as none of her opponents seem to be serious contenders. She’s faced her heaviest criticism for her push to bring the Republican National Convention to Charlotte in 2020, while seeing success in helping the city get moving on affordable housing and creating jobs.

Lucille Puckett – Puckett lost her son in a 2016 homicide and says she wants to work in the community to fight back against a rise in murders and violent crime. She’s also been heavily critical of Lyles’ support for the RNC, writing in a recent Facebook post, “3 day[s] is enough time to cause irreparable harm for a lifetime.”

Tigress McDaniel – It seems this perennial candidate has plenty to complain about; she was barred from making legal filings last year after a judge found that she had filed 162 lawsuits in 72 N.C. counties. She also files for office regularly, but rarely actually runs.

Roderick Davis – Davis ran for mayor in 2016, at which time he was highly visible at campaign events. He’s kept a lower profile this year and doesn’t seem to be running a serious campaign.

David Michael Rice – As the only Republican running, you won’t hear much about Rice until November nears. But the local GOP has already said they approve of Lyles and they’re focusing on council races, so you might not hear much about Rice period. Then again, he announced himself as “Lord God King” during his 2010 run for the county’s Soil & Water Conservation Board, so he doesn’t need anyone’s help.

Chad Stachowicz – This south Charlotte resident and CEO isn’t shy about sharing his ideas; he recently announced his comprehensive policy plan the Queen New Deal, complete with a website listing all the deal’s details.

Dimple Ajmera – Though the city inexplicably dissolved the Environment Committee that she once chaired, Ajmera was able to play a big role in the city’s adoption of the Strategic Energy Action Plan. She’s also let it be known, we aren’t taking Trump supporters on our council.

Julie Eiselt – Eiselt withstood a wave of young candidates in 2017 to win her second term and become Mayor Pro Tem under Lyles, continuing to fight for issues she cares about like public safety, affordable housing and transportation.

LaWana Mayfield – After four terms fighting hard for her district, spearheading efforts to land the Carolina Premium Outlets, the Goodwill Opportunity Campus, Carowinds expansion and job fairs galore, she’s going for an at-large seat. If she stays off Twitter, she’s got a good shot.

James “Smuggie” Mitchell Jr. – In his second term as an at-large councilmember, Mitchell is the most experienced one at the dais, having previously served 14 years as a District 2 representative. He still voted for the RNC, though, for some silly reason.

Jorge Millares – A lot has been made of the chance that Millares could become the city’s first Latinx council member, and it’s sad that’s still even a possibility in 2019, but he’s also got a solid platform focused on economic mobility, immigration, community policing and affordable housing.

Braxton Winston – Winston made national headlines when his participation in the 2016 Charlotte Uprising led him to city council a year later, and he’s continued to fight power from the inside, live-streaming meetings until the city was shamed into streaming and televising them.

Joshua Richardson – The only Republican running at-large, Richardson is up against it. He’s been presenting his platform on social media with typo-ridden graphics, including one on Aug. 8 that misspelled Charlotte. Oy.

Sean Smith – Smith is a newcomer to Charlotte politics, but he’s not scared to speak truth to power. At a recent forum, he suggested breaking up Duke Energy’s local monopoly, and in a recent Nerve interview, he advocated for taking the fight to Raleigh politicians who he feels are holding Charlotte back.

Larken Egleston – Egleston has seemingly taken more shit for his RNC vote than anyone, including the mayor. He’s confidently pushed on, however, and continued to advocate for affordable housing and historic preservation through adaptive reuse, among other things.

Jessica Davis – A former teacher with experience in the local justice system, Davis played a big role in saving The Excelsior Club, a fight close to many District 2 residents’ hearts. She’s now focused on gentrification, a less tangible but more important issue on the west side.

Malcolm Graham – He spent five years on city council before winning a seat in the state senate, where he stayed for a decade. He was launched back into politics after losing his sister in the Emanuel AME Zion massacre. He now wants to fight gun violence on a local level.

Antoinette Green – Five years ago, Charlotte native Green left her corporate job to become a teacher, and this spring was named an “Excellent Educator” by Power 98. Her focuses include economic mobility, affordable housing and improving trust between police and the community.

Jacob Robinson – The winner of the primary will face Robinson, a Republican and newcomer to west Charlotte who likes to mention how he’s lived in every quadrant of the city. The marketing strategist has lived in the west side for a whole year and would love to have a go at fixing its problems.

Victoria Watlington – Victoria says she learned the importance of service during her childhood in a military family. A graduate of all four City of Charlotte academy programs, she currently sits on the Civil Service Board, the Business Advisory Committee and the West Boulevard Neighborhood Coalition.

Caleb Theodros – A 25-year-old from an immigrant family, Caleb has been politically active since joining the Young Democrats at Harding University High School. He’s since worked with current District 3 rep LaWana Mayfield on issues like transportation, affordable housing and economic development.

Terry Brown – A member of the Charlotte Zoning Board of Adjustment, chair of the Mecklenburg County Democratic Party in Precinct 23 and board member with Westside Community Land Trust, Terry Brown knows how to work from the grassroots and within the power structures.

Gabriel Cartagena – As a student at UNC Charlotte, Cartagena was inspired to run after tragedy hit campus earlier this year. As a leader of Real Change Now, Cartagena wants to push back against gun violence in Charlotte, while fighting for other issues as well.

Charlene Henderson – As host of WGIV’s N Demand On Air talk show, this Charlotte native was dubbed the “Queen of Morality Media.” She’s now focused on jobs, community involvement and fighting gentrification, which she calls a “figurative form of genocide.”

Renee’ Perkins Johnson – As CEO and founder of Triumph Services, which provides services to survivors of physical trauma, Johnson has learned to navigate government systems, and wants to use that experience to work on issues like affordable housing and re-entry programs.

Charles Robinson – This Charlotte native founded One Time, Inc., which provides services for homeless children and youth in need. He’s been a longtime community activist and advocate for Hidden Valley and other communities often left out of University-area discussions.

Matt Newton – Matt ran on a promise to find a solution for east Charlotte’s biggest eyesore, the former Eastland Mall site. It seems he came through, as the city has partnered with Crosland Southeast to develop the site, raising concerns among neighbors about resulting gentrification.

Vinroy Reid – A business owner in Charlotte since 1996, Reid also hosts a Channel 9 show called The Caribbean Connection. There are three whole episodes online. That’s all we can find on him.

Mark Vincent – We could not find any website, Facebook page or info about Vincent or his campaign, not even a TV show.

Tariq Bokhari – The Republican incumbent won’t be facing any opposition in the primaries. He’s found bipartisan popularity thanks to his R&D in the QC podcast with Larken Egleston. We’ll say this for him, he’s a hell of a lot better than Kenny Smith.

Gina Navarrete – A co-president of the Charlotte Women United March, Navarrete hopes to become the first ever Democrat elected to the District 6 seat and the first ever Latinx council member. The mental health clinician is dedicated to health-care access, equality and economic prosperity.

Ed Driggs – Driggs is currently serving his third term as District 7 rep, and can be counted on for the predictable Republican take on things ever since Kenny Smith left. He’s heavily involved in local schools, and his role on council revolves mostly around economic development.

That’s a wrap for city council candidates. Also on the ballot this election: the Charlotte-Mecklenburg Schools Board of Education. Three at-large seats will be up for grabs, as Elyse Dashew is the only one running for re-election. With everything going on at CMS recently, folks are sure to be fired up, and we plan to cover it plenty in the lead-up to the November election. Stay tuned.