I tried rutabaga once. The mushy texture and broccoli-like taste was enough to steer me away from it. One bite was enough.

Last Friday, May 10, I ventured out to the inaugural, three-day Epicenter Festival in Rockingham. The festival was a replacement of sorts for the now-defunct Carolina Rebellion. It was put together by Rebellion organizer Danny Wimmer and featured hard rock and heavy metal acts ranging from Foo Fighters and Evanescence to Rob Zombie and Korn.

On my way in to the Epicenter on day one, I got stuck in traffic for two-and-a-half hours. On my way out, I got stuck for another three. Both experiences scared me away from trying it again. It might have been the right decision on Saturday, when the festival got shut down after about 5 p.m. It was the wrong decision on Sunday, when the show went off without a hitch.

The experience of sitting in my car alone for nearly six hours within a 12-hour time span left me traumatized — stuck in a vehicle with a car 6 inches in front of me and another 6 inches behind me with nowhere to go, knowing I had a bed just 10 minutes away if I could only get out of that God-forsaken parking lot. If I could get into the main artery of traffic. If those attendants would stop letting only the first row of cars go. If they would just let other cars go. If there was another way out. Just to move. A little.

I shifted my car between park and drive countless times as if it would make a difference. If I put it in drive, maybe someone would move. Then my heel got sore, so I put it in park. Taking my foot off the brake felt like giving up.

I’ve been to Bonnaroo more times than I can count. I went to all but one Carolina Rebellion. I’ve been to hundreds of concerts in the last 12 years. Nothing could have prepared me for sitting in that traffic.

When I finally parked and began to make my way in, I was thrilled just to be walking. I didn’t care that it took 15 minutes to get to the front gate. I didn’t care that one of the main stages looked like it was a mile away. I wasn’t in my car anymore.

I spent the day watching numerous bands, which helped me forget about my earlier experiences a bit. Rob Zombie was more energetic than ever. Amy Lee of Evanescence sounded as good as she did in the late-’90s. Machine Gun Kelly got the crowd riled up. Dorothy impressed me with their blues-driven rock. Korn closed out the first day and I was starting to look forward to the rest of the weekend.

(Click gallery below for slideshow. All photos by Jeff Hahne.) 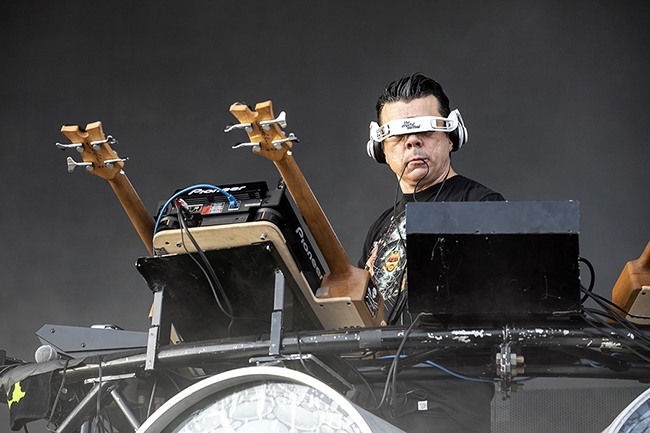 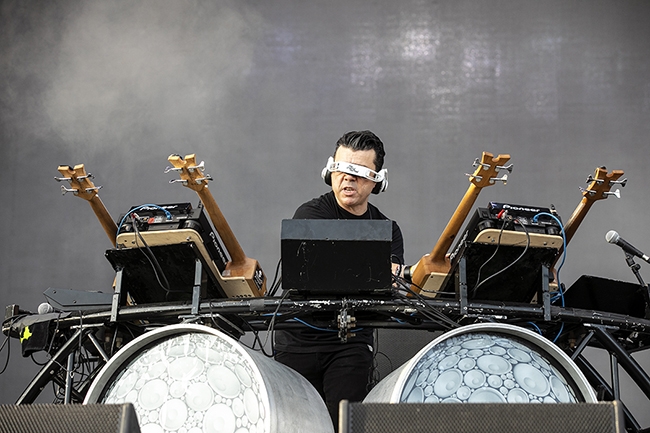 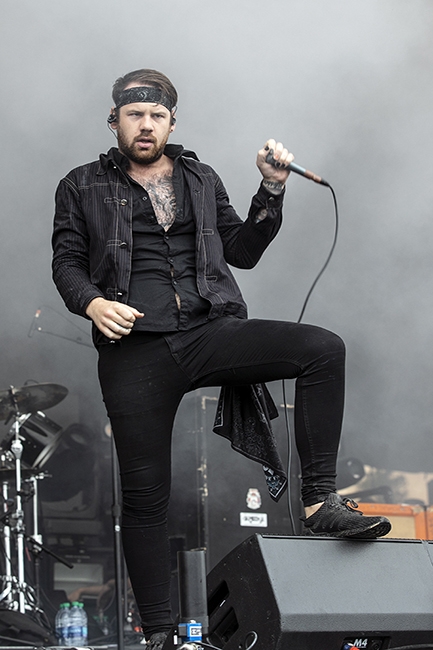 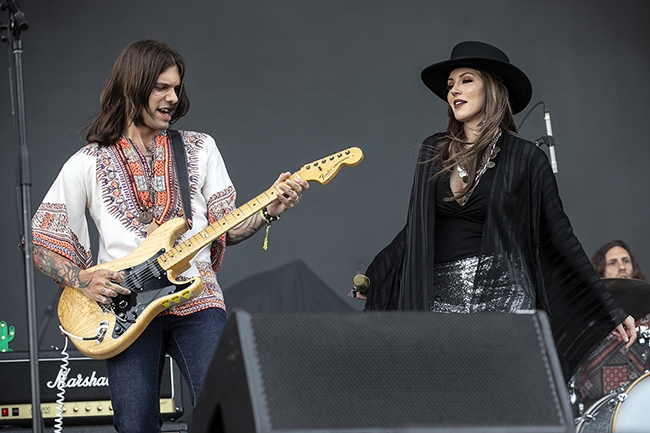 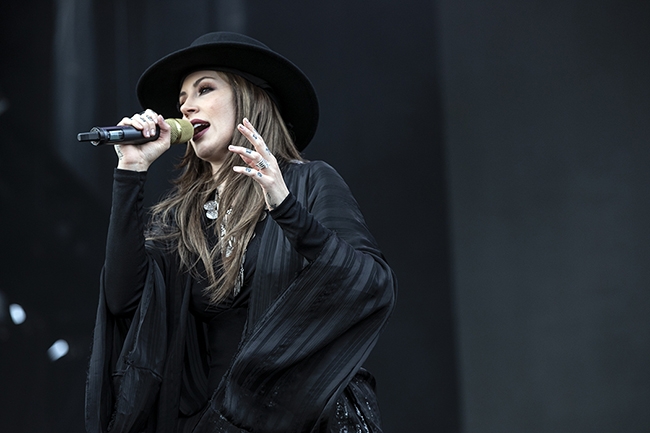 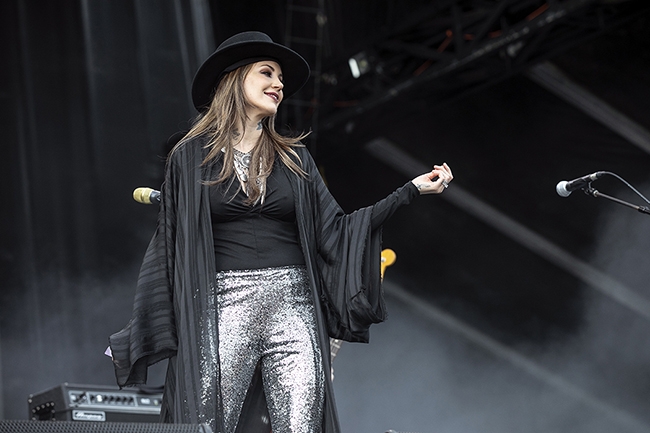 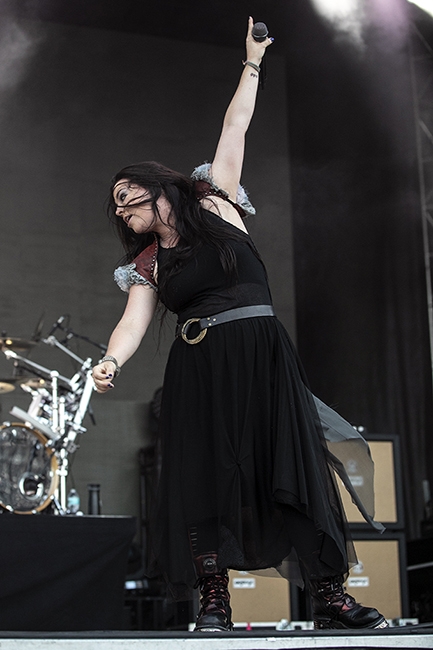 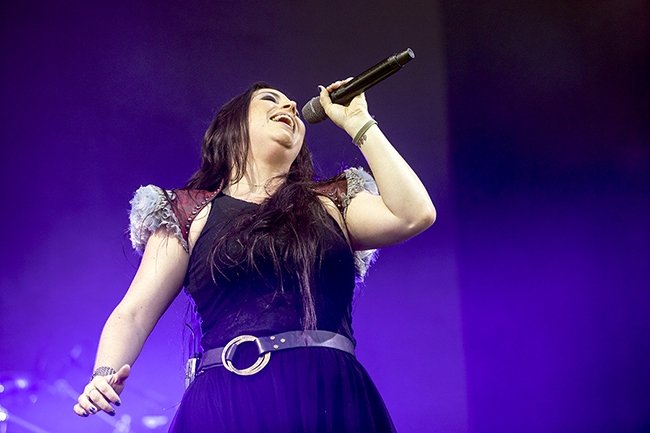 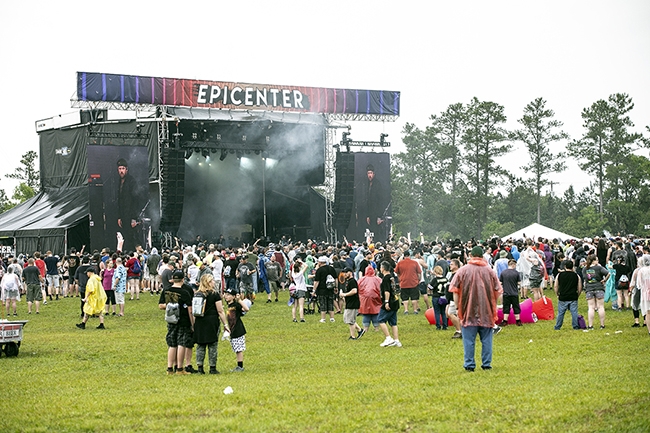 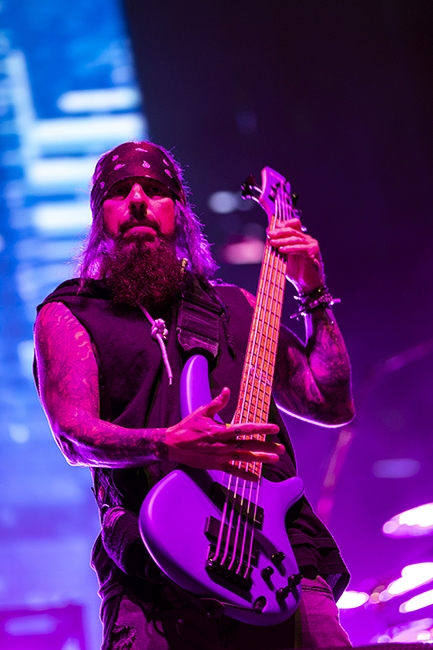 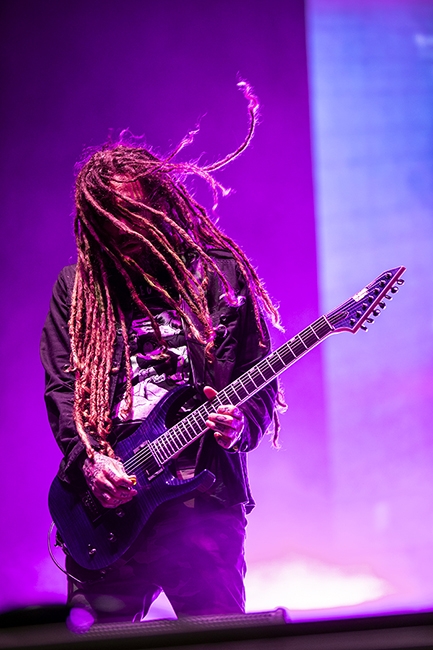 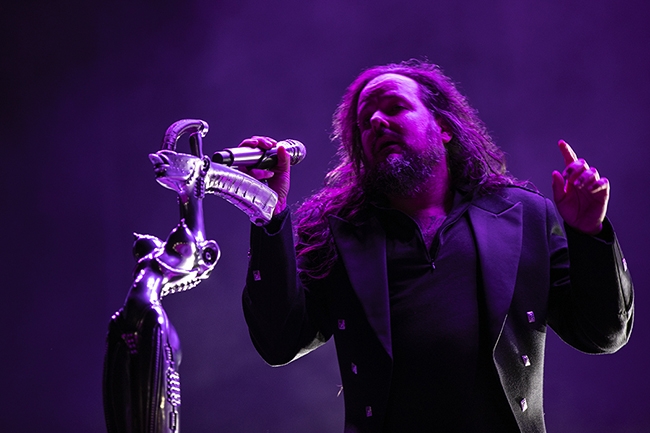 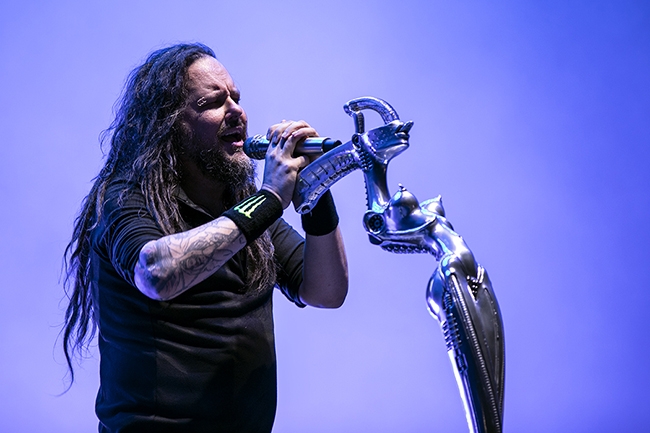 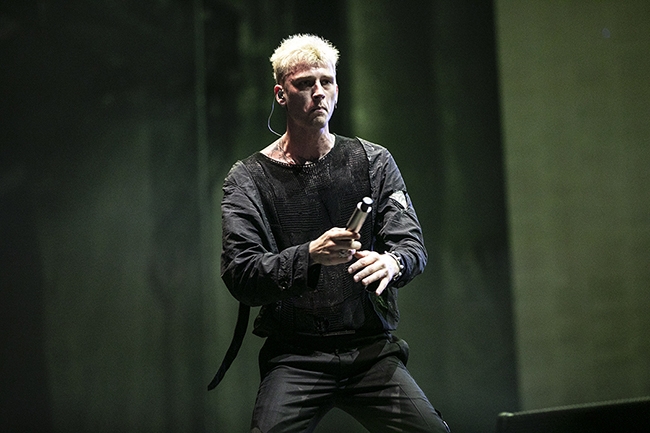 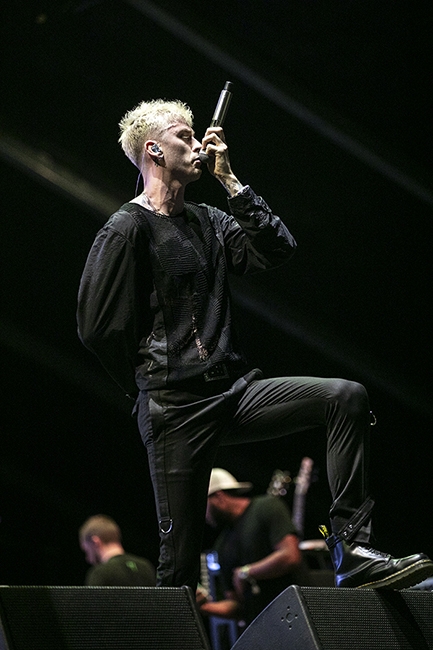 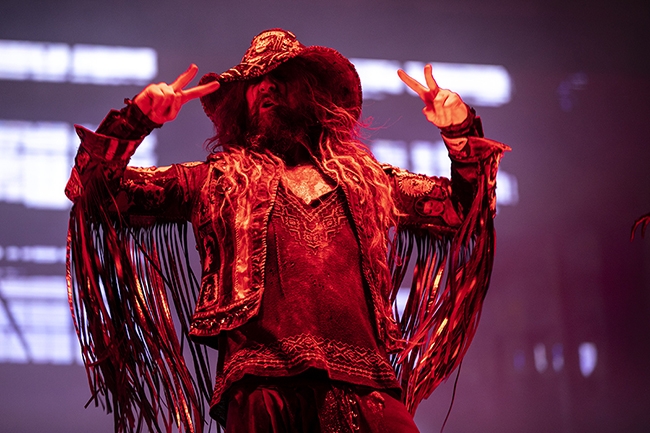 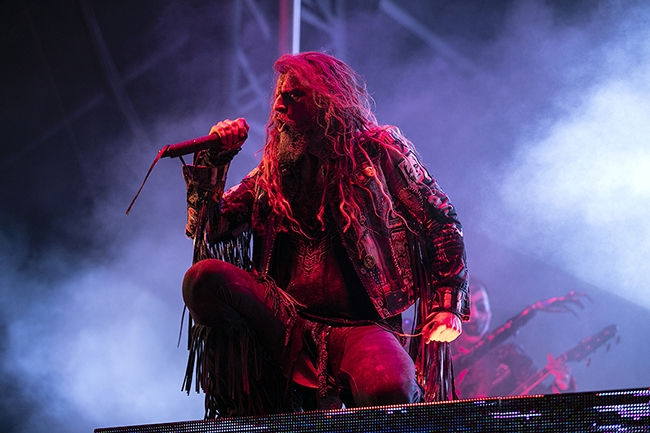 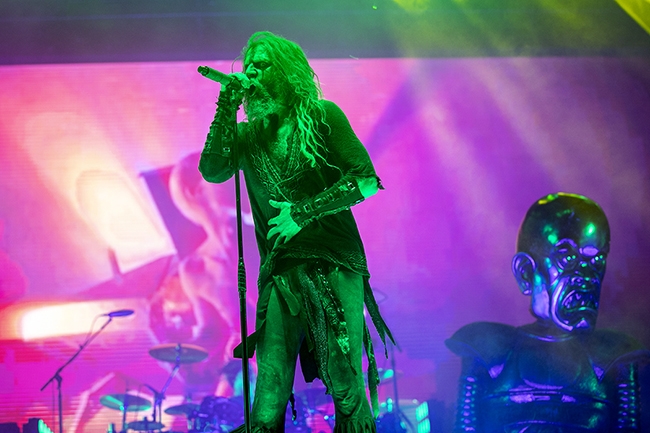 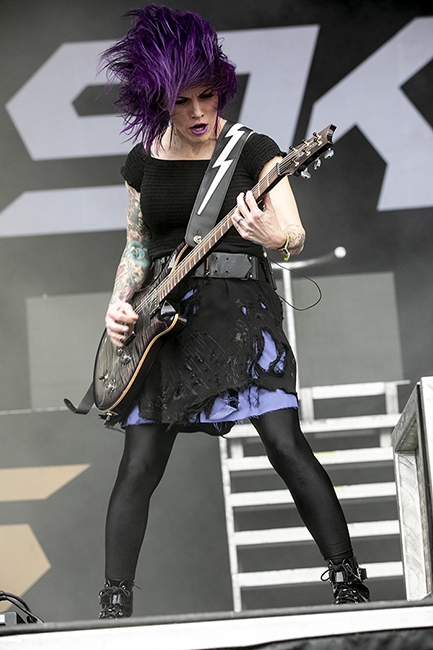 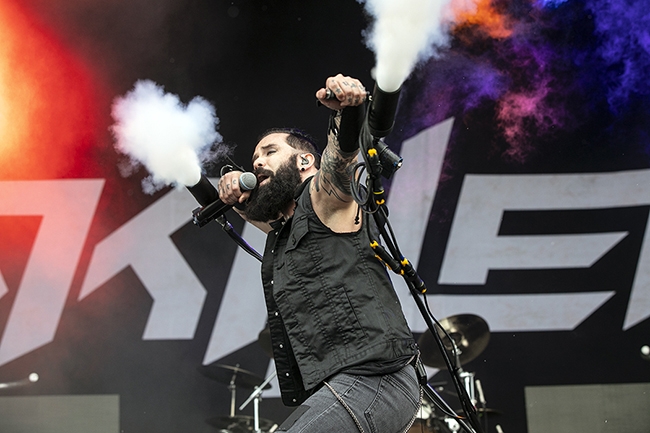 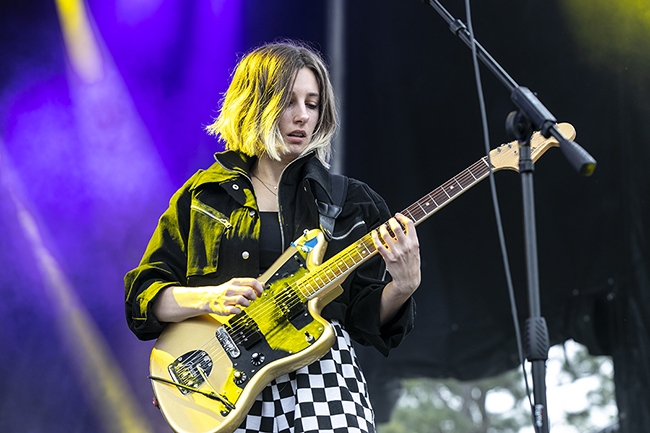 The trek back to my car started just a few songs into Korn’s set. I wanted to get a jump on the traffic and hopefully get some sleep for the next day.

I alternated between listening to the radio and listening to expletive-filled tirades from nearby drivers. I worried that I’d run out of gas. I wondered if I was going to have to sleep in my car. I longed for conversation to help make the time go by quicker. I looked at my GPS to see if the dark red lines would change to a lighter red — for any sign that cars might be moving.

After three hours, I heard a woman yell, “Someone rammed the fence at the back — there’s a way out!”

Free at last, free at last.I’ve never felt so much relief. I sped up the hill and hoped my car wouldn’t bottom out on a pothole in the grassy field. I sped toward the opening in the fence and followed a long line of cars through multiple camping areas. I saw a highway and felt the weight budge from my shoulders.

By the time I reached a relative’s house 10 minutes away, I was still wired. I edited photos and went to bed around 5 a.m. Three hours later, I woke up and considered the bands set to play that day. The same phrase kept popping up in my head: “I can’t do that again.”

“I can’t sit in traffic for hours on end again. I’m going to lose my mind … again.” A check of the weather forecast showed plenty of storms headed into town. I made the decision to go home. If it got better, I could come back on Sunday.

When Saturday’s schedule shut down early and long lines of traffic built up yet again, I knew I had made the right decision.

On Sunday morning, I woke up and saw a forecast for more thunderstorms. I thought about three to four hours of traffic again. I decided not to go back — the biggest factor being the traffic. Looking back now, hearing stories from Sunday’s goings-on, it was the wrong choice. At the time, the idea of sitting in my car for hours leading into a 90-minute drive home was too much. Those who stuck it out through the traffic and storms were treated to a fantastic day and night of music including Foo Fighters, The Fever 333, The Interrupters, Tom Morello and 311.

I hope Epicenter Festival organizers learn from their mistakes and figure out a better flow for next year — if it returns. I hope they don’t offer $1 tickets again, which brought a larger number of cars to the festival grounds than they could handle. I hope I’ve forgotten about this experience by then. Much like that rutabaga, it’s left a sour taste in my mouth.

This morning, I was stuck in Charlotte traffic on the way to work. My usual 30-minute commute took more than 45. You know what? It didn’t seem so bad. It could have been a lot worse.