An architect, a novelist and a journalist walk into a bar. No, this isn’t a set up for a dad joke.

Instead it’s the scene on a rainy Friday afternoon in Plaza Midwood when Jeremy Fisher, Jeff Jackson and I repair to Common Market’s back patio to discuss the imminent release of new music from Julian Calendar, the pair’s indie band that they launched along with poet Amy Bagwell in December 2016.

For those that haven’t kept up with Roman dictators and reformist popes, the band takes its name from the 12-month calendar introduced in 45 B.C.E. by Julius Caesar.

Caesar’s timetable never reflected the actual amount of days it took Earth to circle the sun, and over the years it fell out of sync. In 1582, Pope Gregory XIII introduced the improved Gregorian calendar we use today — although we still haven’t figured out how to do away with leap years.

Speaking of timetables, fans of unpredictable, unclassifiable pop rock should circle the date June 19 on their (Gregorian) calendars. That’s when Julian Calendar’s #MeToo-themed single “Men are Cancelled,” backed with a radically reworked, distaff cover of The Doors’ “Back Door Man,” drops.

It’s the first new music released by the band since their debut album Parallel Collage came out in August 2017, and Jackson says it’s a small sampling of a batch of fresh material slated to come out this year.

All proceeds from sales of the digital “Men are Cancelled” single on Bandcamp will be donated to Planned Parenthood.

“The band felt this was important since women’s healthcare and reproductive rights are under attack,” Jackson says. “It’s a small way we can highlight an important cause and encourage people to donate to it.”

Fittingly, it takes time for the Calendar to produce music.

The delay between the release of the album and the current single is partially due to Julian Calendar’s inclusive method of making music. Songs are allowed to gestate and evolve, and though Jackson sings and writes lyrics, and Fisher composes and plays a host of instruments including bass, guitar, keyboards and percussion, both men stress that they alone are not the band.

Another time factor is that both Jackson and Fisher tend to get a little busy.

Along with his day job as an architect, Fisher also plays bass with hypnotic primal rockers TKO Faith Healer. With his most recent novel, Destroy All Monsters, Jackson makes language rumble and flow like rock ‘n’ roll, which has earned the tome accolades from Pitchfork, The New York Times Book Review and many others. The book’s success has kept him occupied.

But we’re getting ahead of ourselves. Let’s turn back the clock on the Calendar to that fateful day in late 2016 when Fisher took stock of some of the music he’d written and decided he wanted some input on lyrics.

“I immediately thought of Jeff and Amy Bagwell,” the 41-year-old Statesville native remembers.

He approached both his friends in one email, asking if they wanted to work together on some songs. Jackson, who knew Fisher from a local book club, almost passed on the opportunity.

“I was very skeptical about it, because it’s such a different type of writing,” the 47-year old novelist says. “I wasn’t sure I had the tool kit to do it.”

Out of the gate, Jackson decided not to write anything literary for lyrics. As a novelist, he had been using language to create highly charged moments that exist beyond language, words that captured feelings without over-explaining them. In contrast, writing lyrics is both easier and harder than prose, Jackson explains.

As a songwriter, he shoots for impactful content that contains multiple meanings, something that can reach a person listening in a noisy club. When it comes to composing music, Fisher finds himself following a similar tack.

“I want to keep things ambiguous and give them the freedom to breathe and live on their own,” Fisher explains.

Fisher is in the habit of recording stream-of-consciousness fragments of music into his phone. He logs them on a Google drive, and then shares access with Jackson.

Either man can revisit these musical bits and pieces, to massage them, revise them or pair them with potential lyrics.

“These little fragments of music that I write come out of the emotional state I’m in at the time,” Fisher explains. “After a while that feeling is no longer attached to that music anymore, so it can become something else.”

Fisher and Jackson’s free-flowing collaboration began in 2016, with Amy Bagwell as a lyricist partner. Jackson remembers the time spent hanging out, trading Spotify lists and developing a shared musical language.

Jackson had hoped Bagwell would want to sing some of the songs, but she preferred not to perform. Eventually, she left the project, but not before she wrote the lyrics and vocal melodies for three songs on Julian Calendar’s debut album: the darkly psychedelic “Pretty Sounds,” the clangorous “Acid-Eaten Sweetheart” and the haunted nursery rhyme “I am a Thing.”

Those songs seemed to demand a female vocal, Jackson and Fisher decided, so they approached Hundley, who also belonged to their book club, to join the band.

“I sensed that [Hannah] was an artist who had never been asked to step forward,” Jackson says.

“Scott plays everything,” Fisher says. “He was the perfect person to help us out.” 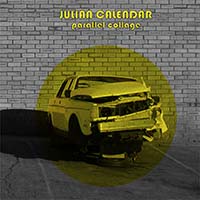 The quartet recorded Parallel Collage over the course of several months, with Fisher and Thompson trading off on drum kit duties.

Without a full-time drummer, the band didn’t play live, even after releasing their first album. That changed when Lee Herrera, who has played with Foreign Air, Patois Counselors and HRVD, took over the drum stool.

But even with this solidified lineup, Julian Calendar didn’t stray from their inspired amateur ethos.

More than a year-and-a-half later, Julian Calendar is planning a new slate of live gigs, kicking off with a Fourth of July show at Petra’s which will feature recent music like “Men are Cancelled.”

The snarky, sassy single serves a serious purpose, Jackson says. Its political message critiques the Republican party’s war on women with humor, and as such it’s a harbinger of the band’s soon to be released project, a cache of 17 to 18 songs that Julian Calendar may release as a series of EPs rather than another album.

Jackson and Fisher feel that the new material, while retaining a through line to the tunes on Parallel Collage, represents a quantum leap forward for the band.

While Parallel Collage’s stylistic smorgasbord touched on progenitors ranging from the Velvet Underground to Pylon and expanded on those influences, the new batch of tunes strays even further afield and takes far more chances, Jackson says.

“The new material is more confident,” he continues. “It’s bolder in terms of what we’re trying to put across.”

The B-side of the new single grabs Willie Dixon’s blues rock standard “Back Door Man,” recorded by Howlin’ Wolf and The Doors, by the scruff of its neck and wrings out every last drop of macho bluster.

The cock-rocking swagger of Jim Morrison is transformed by Hundley’s airy vocals and the band’s shimmering sheets of sound into ethereal dream pop.

“I was thinking how great it would be to hear a woman singing these lyrics and turning the blues machismo on its head,” Jackson says.

In theatrical terms he feels it’s a critique of the song, and he wonders how much a cover can stretch a tune’s DNA before it damages the song. But Fisher feels experimentation can only enhance a song.

“Musically, I had the idea to defang ‘Back Door Man,’” Fisher explains.

Typical of a blues song, “Back Door Man” has a lot of minor sevenths, so Fisher decided to turn them into major sevenths and expand on them.

“That’s where the dreamy quality comes in,” he continues. “You’re taking the machismo out of the music and softening it up, making it more like Cocteau Twins.”

After pulling back the swagger, Fisher added some dissonance on top to give the tune a radically different sonic identity.

Julian Calendar’s secret weapon may be that, for band categorized as indie rock, they aren’t that committed to rock ‘n’ roll. In fact, they can take it or leave it.

When asked why he’s in a rock band, Fisher has a simple answer: It’s what’s available to him. Rock musicians are the crowd he runs with, but creatively he could just as easily be working with a string octet, he explains.

“I’m open to all possibilities of how to write,” Fisher says. “I think of it as a creative endeavor more than a band.”

Band branding also means little to Jackson. When more of their newer material is released, he says, people will have a truer sense of what the band’s been up to and what makes it tick.

Julian Calendar has been experimenting with folk tunes, dance grooves and electronic soundscapes, he continues.