There was a time not long ago when you could count the number of breweries in Charlotte on one hand. With the rapid expansion of the Charlotte beer scene over the last decade, however, it’s not surprising that the Charlotte area now has enough breweries to warrant its own March Madness-style tournament bracket.

That’s the idea behind local food blog Off the Eaten Path’s new Charlotte Brewery Bracket, which will pit 26 local breweries in head-to-head matchups round by round throughout March until a champion is crowned at the end of the month.

Off the Eaten Path founder Chrissie Nelson Rotko has created a bracket that includes 26 Charlotte breweries, with six of the bigger names in the Charlotte craft beer scene — Olde Mecklenburg, NoDa, Sycamore, Wooden Robot, Birdsong and Resident Culture — enjoying byes in the first round, which begins on March 4. 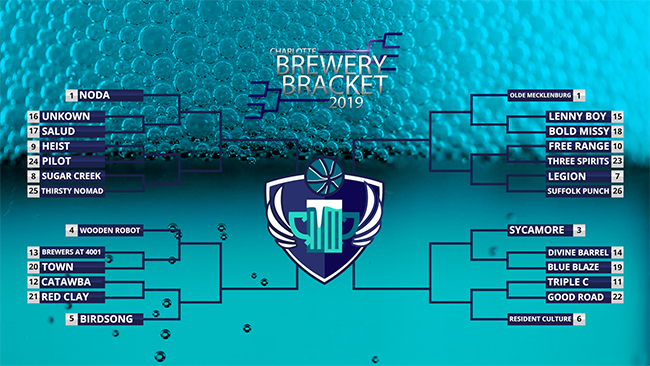 Rotko said deciding on seeds and bye rounds was the hardest part of the process. She originally wanted to include 32 breweries, which would eliminate the need for byes, by including some from outside the Charlotte city limits, but doing so would have left her with even harder decisions to make about which area breweries made it in and which were left out. In the end, she kept the contest within the Queen City, and researched until she was confident that everyone was treated fairly.

“Prior to seeding, I did a lot of research including referencing other local Charlotte publications, more regional and statewide publications, brewery history, awards won, as well as surveying my audience based on a number of criteria including beer, taproom, atmosphere, food and ambiance,” Rotko said. “I also spoke with a local certified cicerone as part of my research. I think I drafted and reworked the seeds over about a month-and-a-half to two-month period, and while I’m sure there will be people who have qualms with certain seeds or maybe disagree with the seeding overall, after working on it over a period of time I felt that this was a good result.”

Voting for each matchup will take place on Off the Eaten Path’s Facebook and Instagram pages, and will last 24 hours each. The schedule will look like this:

Leone's Debut EP is the Throwback We All Needed