NoDa restaurant The Goodyear House has illegally misappropriated tips from its service staff and is now using intimidation tactics to avoid repaying the lost wages, employees are alleging.

According to multiple employees who spoke with Queen City Nerve, Goodyear House management appropriated the tips from the time the restaurant opened in January 2020 to mid-May of 2021, and could owe staff members between $60,000 and $70,000.

Following a wedding event at the restaurant during which all servers’ tips were reallocated to the bartending staff, Wright looked into her recent tip-out receipts and noticed management had been keeping more of her tips than the 15% allowed by state law.

“They were taking closer to 21%,” Wright said. “I was in shock. I left not really knowing if I would be able to come back to work and just … continue to make money for a company that I felt was taking my money.”

Queen City Nerve evaluated Wright’s tip-out receipts and confirmed her claims. On April 17, management reappropriated 24% of Wright’s tips. On April 21, they took 19% of her tips, and on April 23, they took 21%.

Another server from The Goodyear House who wished to remain anonymous told Queen City Nerve the restaurant misappropriated at least 20% of their tips as recently as May 17.

The laws around tip pooling

The popular NoDa restaurant — owned by Chef Chris Coleman, Sean Potter, and AJ Klenk –allegedly misappropriated the funds through a system known as tip pooling wherein servers, bartenders, and other commonly tipped staff automatically contribute up to 15% of their tips to other staff.

A representative from the North Carolina Department of Labor told Queen City Nerve that federal law mandates that the final amount going to each server after the tip out must be at least 85% of the tips processed by that server. None of the reallocated tips may go to non-tipped staff such as managers, hourly wage workers, or owners, the representative said.

UPDATE: Restaurant management originally refused multiple requests for comment on this story, but after its publication, a law firm representing The Goodyear House sent a statement claiming that restaurant management carried out its own investigation of the allegations, which it believes cleared management of all wrongdoing.

“The inaccuracy stems from how the former server quoted in your article calculated the amount that servers ‘tip out’ to the bussers, runners, and bartenders who do the hard work of supporting them,” the statement reads. “In doing her calculations, the server you quoted included only tips left on credit cards. She did not include tips left from patrons who pay in cash and patrons who pay the bill with a credit card but leave their tip in cash.

“This is a critical omission because the servers have always kept 100% of their cash tips and ‘tipped out’ 0% of their cash tips to their supporting employees,” the statement continues. “Therefore, while the amount of tips left solely on credit cards may have at times exceeded a tip out of 15%, when all tips — both credit card and cash — are included, the company fully believes that the servers were at all times compensated appropriately and legally.”

This contradicts claims from multiple employees who told Queen City Nerve members of management confirmed the wrongdoing to them, though saying it was accidental, in individual meetings.

“She kept saying it wasn’t theft because they didn’t know about it,” Wright said.

When asked by a Queen City Nerve reporter to confirm these claims or comment more broadly on the allegations before publication, Payne said, “We’re not really interested in commenting on that.”

In a meeting on May 7, Payne and owner Sean Potter called Wright into the restaurant 45 minutes early for a meeting to discuss the claims, according to Wright. In this meeting, Wright said Potter admitted the tips had been misappropriated but claimed ignorance to the federal law requiring all servers receive at least 85% of their tips. Potter told Wright the tip-out structure would change.

Similarly, in a separate May 8 meeting, Payne and Potter reportedly told the anonymous server we spoke with that they did not know there was a law stating they couldn’t take more than 15% of employees’ tips, and that they had been taking 20% by policy.

“[They said] now, they’re going to be taking 15% from now on,” the server said. “There was no discussion ever of reimbursing money that they took in the past.”

Wright confirmed that Potter did not offer to compensate her or other servers for past misappropriated wages.

Marc Gustafson, a partner at legal firm Bell, David & Pitt focusing on employment matters, told Queen City Nerve employers generally must compensate employees for unpaid wages. Gustafson did not speak to the specifics of the situation at The Goodyear House, or the specifics of the law around tip-out structures.

“If someone is not paid wages they are entitled to, then the employer is in fact on the hook for those,” Gustafson said. “In fact, there are what we call liquidated damages.”

Gustafson said these liquidated damages are an additional amount on top of the owed wages, and are equal to the unpaid wages.

In March 2020, the U.S Department of Labor (DOL) ordered South End restaurant Hot Taco to pay $120,949 in back wages and liquidated damages to 67 employees for minimum-wage violations resulting from illegal tip-pooling policies.

According to a DOL release, Hot Taco illegally required tipped employees to share tips with non-tipped employees such as kitchen staff. The mandatory tip-pooling arrangement did not meet requirements mandated by the Fair Labor Standards Act.

In a pre-shift meeting at The Goodyear House on May 8, employees were instructed to sign a document acknowledging the new tip-out structure. Multiple employees told Queen City Nerve they felt they would not be allowed to continue employment at the restaurant if they didn’t sign the document.

Employees were not permitted to take time to review the document with a lawyer, nor was an employment lawyer present to administer it.

Queen City Nerve has not seen the content of this document, but has been briefed on the nature of the document by servers who have seen it.

“I wasn’t comfortable with just signing something in the moment like that,” Wright said. “People didn’t really know what was going on and they couldn’t really understand.”

UPDATE: A law firm representing The Goodyear House says the document was meant to confirm with employees that they are aware their compensation model has changed, as required by North Carolina law.

“Going forward, instead of having all ‘tip outs’ come from only credit card tips while the servers keep 100% of the cash tips, The Goodyear House has changed its policy so that the servers will be tipping out no more than 15% of their credit card tips and also no more than 15% of their cash tips,” the statement read. “The GYH hopes that this change will address any confusion about its policies.”

Wright, who had already submitted her two-week notice at that point, refused to sign the document at first. She said manager Meghan Payne then publicly pressured her to sign it.

Wright said she felt there was not a way for her to work that night unless she signed it. Wright finally signed the document, at which point Payne called her a distraction. Wright immediately quit.

Another source, speaking on condition of anonymity, echoed Wright’s impression of the meeting. The source said they felt they had to sign the document in order to be allowed to work.

“I believe we were all rushed into signing it,” the anonymous server said. The server confirmed that several other servers felt pressured during the meeting.

Gustafson said having a shift taken away could be considered an act of retaliation.

Internally, the story has driven conflict at The Goodyear House. Owners have told staff their wages may be further affected if they continue to discuss the situation, according to one anonymous source.

“There’s a divide happening,” the server said. “Management is saying ‘This is affecting your money.’”

Servers said management has been pushing the idea that if the dining public finds out about the misappropriated wages, diners will boycott The Goodyear House, resulting in reduced tips for servers. The anonymous source confirmed these intimidation tactics are working.

“There are some people basically thinking that people won’t come into Goodyear House because of these claims, and then they won’t make money,” the server said. “Lots of servers don’t want to bring attention … because of that.”

Wright said she’s been vilified by management over the situation.

“I feel like they’ve been gaslighting me,” she said.

Wright detailed the situation in a post made to the NoDa Facebook group on May 20. She also made a post on the NoDa Nextdoor page. Both posts have been deleted by administrators of the respective groups.

The NoDa Business Association, of which The Goodyear House is a member, is listed as one of the administrators for the Facebook group. Nothing in Wright’s posts appeared to violate any of the stated rules of the group.

Sources disagree on whether or not they believe the misappropriated wages were accidental. Several local restaurant owners and bar managers who spoke on the condition of anonymity say that, while accidentally misappropriating tips once in a while is possible, doing it unintentionally for over a year is unlikely.

“I find it hard to believe that people opening a business and people managing are [unfamiliar] with those laws,” said Wright, echoing the general sentiment of other industry professionals.

The anonymous server we spoke to believed the misappropriation was unintentional, but is now spiraling into something else entirely: “What was negligent before is now trying to be fixed or covered up.” 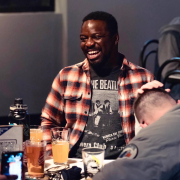