They say the best way to learn how to swim is to jump straight in the water, so that’s what I did.

It started one night in February, as I was having drinks with my friend Dréa Atkins, front woman of local rock group Farewell Albatross and executive director at School of Rock Charlotte.

If your only knowledge of School of Rock comes from the Jack Black movie, you should know about the amazing things this organization does. Throughout the country, School of Rock chapters host camps, workshops and music lessons, helping kids build confidence through shredding.

I’ve been to many School of Rock Charlotte performances over the last 10 years or so, and I still remember the first few because I was blown away by the talent. By now, I’ve come to expect a great show when I see School of Rock on a bill. This is not like going to a school play and clapping at the cuteness. These kids kick ass, and that’s also a testament to the teachers.

Dréa told me about School of Rock Charlotte’s new Grad School program, which will put adults together in a band to learn a bunch of covers from a specific genre — similar to how the kids do. When she asked if I’d like to take part in the first semester of Grad School, I didn’t need much convincing.

I once was a drummer … to the extent that I owned a drum set in middle school and got decent at it over the two or three years that I had it. Two of my closest friends and I even once formed a band … to the extent that they brought their guitars to my house once and we noisily banged around for an hour or two, named ourselves Ludicrous (this was before the emergence of Ludacris) and never did anything more than that.

I’ve often wanted to get another go at drumming, and what better way to do so than under the instruction of the talented teachers at School of Rock Charlotte? I told Dréa I was in and showed up for my first practice on Feb. 13 ready to learn.

When I arrived at the School of Rock Charlotte house that night, I hadn’t touched a pair of drumsticks in nearly 20 years, let alone played anything on a set. I went into it thinking that everyone else would be in the same boat, learning instruments for the first time, so we could all come up together. This was not the case.

I met my bandmates and told them about my long hiatus from playing drums, and they laughed it off, saying not to worry about it. Some of them had barely taken their respective guitars out of the case for the past year or so.

That should have been my first warning (these guys own the instruments they’re playing!) but it didn’t begin to sink in just how out of my element I was until we settled in to the practice room and began tuning our instruments. Even just listening to them warm up, I could tell that these guys could play. I was going to have my work cut out for me.

Another aspect of the experience that had me nervous was the genre we’d be covering: hair metal. I consider myself a relatively cultured music fan with interests that span the spectrum of tastes, but if there’s any era that I have ignored in my years of fandom, it is the era of hair metal. As we discussed the potential songs that we could learn over the next three months before a May show (in public! *cringe*), I could offer no help. I couldn’t have told you the difference between Guns & Roses or Poison.

We started that night with Twisted Sister’s “We’re Not Gonna Take It.” I wasn’t totally unaware of this song. I mean, I knew the chorus. Considering I wasn’t going to be doing any singing, that didn’t help me much.

I can only imagine how it sounded to the rest of the band as I brought us into that first song, leading off with an easy enough drum beat that I’m sure I still managed to mangle. Through that night, I was able to make my way through that and a couple of other songs, but I could see the look of exasperation on some of my bandmates’ faces. They were supportive throughout, but it was clear that this was going to take some time.

Over the next three months, we showed up to that small room every Wednesday and, under the tutelage of the talented Alexis Mattey and Nic Pugh, we eventually began to start sounding decent, though it was a struggle.

Thanks in part to my ignorance of the genre, I struggled the most with learning each song — specifically when and how to move into a given bridge. I listened to our playlist in my free time to become more familiar with where the transitions were and where my tempo was off. I took a private lesson with Alexis to help with fills and he taught me about counts.

Through the months, we’ve gotten to a point where we actually sound decent, and it’s been more fun than I can express in writing.

As I write this, the band has one more practice before our show at the new Heist Brewery & Barrel Arts on May 24. I’m not going to lie, I’m nervous as hell about it and I sort of wish we had more time, but as a journalist, I know a deadline is a deadline. As nerve-racking as the experience has been, it’s one that I wouldn’t trade for anything.

I’ve very much enjoyed being reintroduced to music from the other side of the set, and it not only has put me on the path to a new skill as a drummer, but given me perspective as a person who covers the local music scene. After all, the songs we’re playing already exist, so I have a newfound respect for those who start from scratch, working together in the trenches to create something from the ground up — making sure each chord, each fill, each transition comes together cleanly. I can’t imagine the difficulty of it.

I’m confident we’re going to put on a fun, if imperfect, show on Friday, and I hope you come out to see us. Since I won’t have a mic on Friday night, I’ll say it here: Thank you Charlotte, and goodnight! 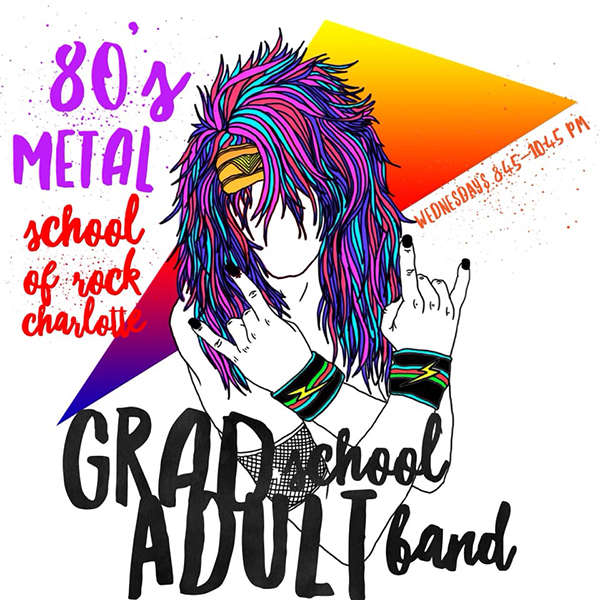