It’s 6 p.m. on a Monday evening and Marc McQuillen’s priority, for the short term at least, is to thaw some barbecue and feed his coworkers on the side of the road.

When I meet with McQuillen, president of the local chapter of the United Auto Workers (UAW) union, he and his coworkers have just entered the fifth week of a strike that has kept them out of work from their jobs at General Motors’ Charlotte factory and picketing in shifts for 24 hours a day.

Wednesday marks a month since Sept. 16, when 95 local GM employees walked out of the southwest Charlotte plant, joining tens of thousands of hourly employees who are striking at 31 factories across nine states.

The crowd on Quality Drive has thinned a bit over the last 30 days, but McQuillen says morale is still high. He says he expected the strike would last at least this long, and doesn’t imagine he’ll be returning to work this week.

Despite recent media reports that GM Chief Executive Mary Barra has met with UAW leaders this week, with both sides reportedly nearing an agreement on issues like pay disparity in the company, there’s been no word on one of the strike’s biggest issues — one that McQuillen has prioritized for his people since it began: job security.

He says he’d like to see GM parts built in America, rather than outsourced to Mexico, where he says workers are being exploited. He’s also concerned with the treatment of temporary employees, for whom he’d like to see a clearer path to permanent employment.

“Some General Motors facilities have had temporary employees for six years,” he points out, “so how would you like to be a temporary employee for six years where you’re working next to somebody who’s making more money than you, is eligible for profit sharing, gets a vacation, but you are constantly almost like an at-will employee? That is a huge issue.”

While we speak, McQuillen adds water and mixes a thawing block of barbecue that was dropped off by members of the local chapter of the International Association of Machinists and Aerospace Workers.

He says the support from other unions around town has made all the difference in keeping his team of strikers going. He credits North Carolina State AFL-CIO President MaryBe McMillan with keeping all the unions under that umbrella connected and supportive of one another.

“The one big thing that has been a huge help to all of us is the support we’re getting from other labor organizations in the area and the community,” he says. “That has really helped raise people’s spirits. Constantly we’re getting a lot of people coming through here, and that’s great.

Morale overall I think is still pretty good,” he continues. “Some people are getting frustrated with the process or don’t understand the process, particularly a lot of our younger members, and that’s why we’re trying to work and really get them to understand it.”

One younger member who’s been picketing through the month is 19-year-old Kameko Bramblett, who was hired just a week before going on strike. Bramblett and others have been doing six-hour shifts in groups of three, though others often come visit to support regardless of when their shift ends or begins.

Though she calls the strike “irritating,” as she was hired straight from high school and needs to make money, the strike has been a chance for Bramblett to connect with coworkers that she may have never spoken to.

“You get a steady flow of normal money and then you get a lot less money when you’re on strike,” she says. “And when you’ve got a truck payment, it makes it a little harder.”

Next week, strikers will see a 10% weekly raise in pay from UAW, from $250 to $275. The policy was originally supposed to go into effect at the beginning of 2020, but labor leaders saw a need from people currently on strike.

Malcolm Bryant has been working at the GM plant since November 2015 and says this is his first time being out of work for this long since high school. He reiterates Bramblett’s point about the strike bringing him closer to his coworkers and says he’s trying to make the best of it. 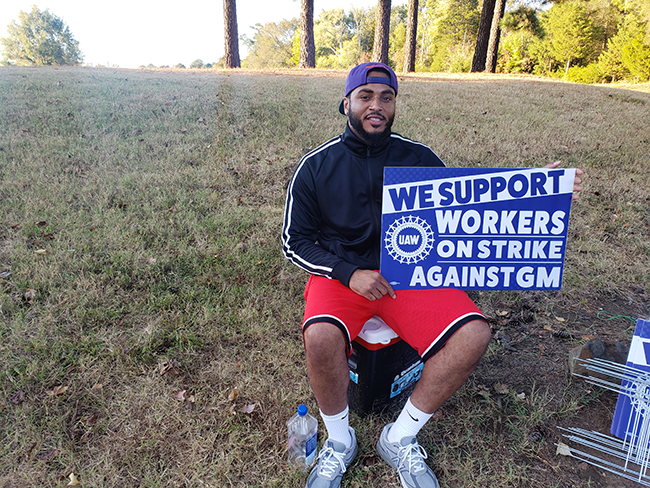 “Financially, I don’t have any kids, so I was more prepared for it, I was able to plan for it,” he says. “I’m still good financially, but if this lasts another month or so, I might be digging into some reserve money. I don’t think it will last that long, but for me, the whole experience has been a kind of learning experience.”

For McQuillen, a GM veteran of 39 years, all he can do is make sure his people in Charlotte are OK while he waits on word from above.

“We’re committed to getting a resolution to this any way that we can,” McQuillen says. “We’re out here supporting the international union to go out and get an agreement and get it back here so everybody has the ability to vote on it, and if it’s good for everybody else, let’s go back to work.”

Opinion: Why I'm Voting For the Proposed Arts Tax