On December 15 in Charlotte’s Third Ward, about 60 people fit into the gift shop of the Harvey B. Gantt Center for African-American Arts + Culture to support the release of Boris “Bluz” Rogers’ new book, And Then Tamir. The mood as local poets took their turns performing work of their own and from Rogers’ book was intense but not celebratory.

The book, which includes poems about a number of headline-making cases in which black people in America have been killed at the hands of police or others, didn’t call for a party, per se.

“I really wanted to keep it kind of simple and energetic, but not too much a celebration given what the book is about,” Rogers said on the Sunday following the book release. We chatted with Rogers about why he wrote the book and what the process was like for him.

Queen City Nerve: What are your thoughts about yesterday’s turnout?

Boris “Bluz” Rogers: The turnout was beyond what I expected. It was so amazing to have so many people come out and help me celebrate the release of the book and support it, especially on a rainy Saturday in Charlotte. I’m simply amazed and humbled by the whole thing.

How did you decide who would perform at the release?

I was the coach of Slam Charlotte so I got some of my team members to come through and read a piece from the book, but I also wanted them to share their own work. I’m always thinking about the next person, especially in terms of the arts. If I see a platform or a stage that I think someone else can really shine on, I’m all about “Just do your thing.” I asked them specifically for poems that I really enjoy that I think would really reflect what the event was about, so they delivered that. Breeze and Angelo both did new pieces that they’ve been working on, which is always exciting for me because I like to share new stuff. The poets really got to come out and I said “Yeah, just do your thing first and then read one of my poems and let’s make a real show out of the whole thing.”

How did you decide that this collection should become a book?

About six months ago when Ed Mabrey created Grumble Press he was looking for poets and writers to start filling his roster and he was like, “Hey, do you have any book ideas or anything you’d like to do? I’d love to get you on.” I was like, “Well, I’ve got these posts that I’ve been working on and I’ve always thought about what it would look like as a book,” and he was like, “Let’s do it.” I went back and filed through years and years of Facebook posts and Instagram posts with the #AndThenTamir hashtag that I was doing and compiled those into a book. I didn’t know what to do with the work, I had been just sending it on Facebook and I thought, well it lives there now. That’s when I really took it a step further and said, “Is there a foundation or something I could attach this book to to help them out and keep Tamir’s name alive?” and I was like, “Why not just talk to his mom?” And so that was kind of the next natural step. And that was really surreal, being able to talk to this woman whose child is tragically famous, it’s just a whole other level of emotion.

So it started as a social media hashtag?

Yeah. One of the first poems I think I did was “Alluenza,” which is about the young man who got drunk, took his truck and just murdered four people and I was like, “And then Tamir,” and that’s what I kept saying after someone got murdered or killed, I was like, “And then Tamir,” like I was actually speaking to him as if I was trying to catch him up with everything that’s happened and that’s when the hashtag was born, #AndThenTamir. 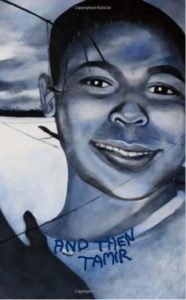 You touch on so much tragedy in the book but it’s all centered around him. What was it about Tamir’s killing that stuck with you specifically?

Tamir’s death just shocked me because I remember being his age and playing with [toy] guns. I’m a child of the ’80s, and my dad was in the military, and we played a game and it was called Guns. We played Guns and it was like that’s what you had, you had toy guns and they sold toy guns and when I saw the video of how fast they shot him I was like, “We’ve been there, we’ve been those kids.” His name just kept rattling in my brain.

So much time had past since his killing and everybody was kind of letting the whole incident roll by. Not that they were forgetting, but there’s so many things that have happened since then, there wasn’t much time to grieve and remember him, things just kept rolling. For me that was kind of a pinnacle because I can attach my childhood to a game he was playing in a park or wherever, and I wouldn’t know what it would look like for a police officer to roll up on me when I have a toy gun in my hand and I’m 12. What would I do in that kind of situation? Tamir didn’t have any time to process anything. They just came and they took him.

When you’re working on a book like this, what is the emotional cost of pouring all your creative energy into these tragic stories?

A lot of it is revisiting emotions. A lot of those poems are old, and they were reflective of the moment and the time and space that I was in to write that. So I had to go back and look at them and remember all the stuff that happened. I remember where I was when I wrote it, how I felt when I wrote it, and it all comes rolling back a little bit. But as exhausting as it was, there was a bit of satisfaction to know that I’m doing something, because I felt hopeless at some point and I was like, “I need to do something.” Writing the words are fine but there’s got to be a step more to it. So being able to craft it and attach some of the proceeds to the Tamir Rice Foundation was really gratifying to me, too.

Some of them were old, but other incidents that you wrote about like the killings of Botham Jean and Jemel Roberson were recent.

As I’m working on the book, Botham Jean happened. Ed Mabrey was like “Yo, do you want to add that in?” and I said, “I have to add that in.” Just when we’re thinking we’re hitting a deadline and a stopping point, it’s like no, because we have to add this name and add that name, and that’s the exhausting part really. It’s sad, because this book is done, but is it really?

You can find And Then Tamir on Amazon.