When Carla Aaron-Lopez first learned that this year’s LOCAL/STREET exhibit would be held at The Mint Museum’s Uptown location as opposed to the one on Randolph Road, where it debuted last year, her first thought was about expansion.

“The Uptown location is so much bigger than last year that it was like, ‘Oh man, we gotta activate every single space I’ve been given and make sure that when people come out they really enjoy themselves and enjoy the artwork on the walls.’”

The space was needed. On Thursday, June 16, Aaron-Lopez threw an opening night party that saw more than 700 people pass through the exhibit, which aims to highlight local artists of color,  many of whom had never been displayed in a museum or gallery before. The evening includes performances by neo-soul singer Cyanca and “Black Love Is Revolutionary,” an interactive interpretive dance performance by Roni Nicole Henderson and Cedric Umoja.

This year’s LOCAL/STREET exhibit features around 60 artists, which you can find listed here alongside their Instagram handles. That’s a 50% increase from last year’s debut show, which ran for just three days at the Mint Museum Randolph. This year’s will extend a little further, running through Friday, June 24.

LOCAL/STREET is a partnership between Aaron-Lopez and The Mint Museum to “address the reality that museums and cultural institutions are often seen as uninviting and unwelcoming to BIPOC artists and visitors,” according to a release sent out by Charlotte Is Creative, which also helped with the event and exhibit.

Following the party on June 16, I hopped on the phone with Aaron-Lopez to discuss this year’s expansion and how it differs from last year’s LOCAL/STREET exhibit.

Queen City Nerve: Last year, we spoke a good bit about why you were adamant that LOCAL/STREET would be a three-day pop-up. What made you agree to extend it out longer this year?

Carla Aaron-Lopez: The Mint actually wanted it to last longer so people could have time to come to their space and enjoy all of their exhibitions. I want to keep it in that pop-up nature like, “Oh wow, here today, gone tomorrow,” but what we’re finding, what I’m learning is the people I’m working with, they want to see it longer, they want to stay with it longer, live with it longer, and I actually think that’s kind of cool.

What was that curation process like for you to select this many artists?

The craziest set of puzzle pieces you could ever think of. It’s the craziest puzzle game ever and I don’t know why I do it to myself; it’s a little sadistic. As I started going through planning and executing I made a decision: I need to create space for people I simply don’t know. So I let an artist call live for about two weeks just to see how I would feel about that — who would be willing to submit into it — and I got a lot of really cool submissions, which is why that number increased so greatly.

Plus I’ve worked in the M5 space

Once again this year you worked with Mint’s Chief Curator and Curator of Contemporary Art Jennifer Sudul Edwards. What is that working relationship like on a project like this?

She was my advocate in the space of The Mint. That’s what it’s like working with her. The entire exhibition is my thing and she checks in on you throughout the process and if you have questions, she’s always willing to answer them. That’s really what it’s like. It’s like, for this brief period of time I get a mentor who’s helping me further understand what the curatorial process is like.

Some of the more noticeable additions I noticed this year in terms of art were the light boxes — the large, backlit photos by Will Jenkins. What’s the story behind those?

Light boxes are sexy because you just end up standing there staring at them. It’s something that got started last year for Durag Fest; light boxes were installed at the Nascar Hall of Fame. But then the question became, “How can we change out the images? How can we continue to push this process?” I’m always trying to figure out how to get to the next level. 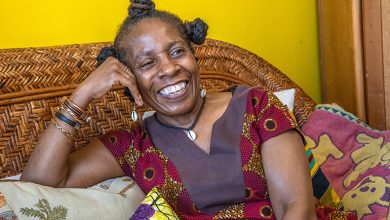