In 2021, Elizabeth Kowalski invited Charlotte music fans to stare into space at the Stargazer Music Fest. On Oct. 2, she invites them to get lost in it.

Lost In Space, a musical and artistic galactic-themed performance, opens for one night Sunday, Oct. 2 at 7 p.m. at the Booth Playhouse, part of the Charlotte International Arts Festival.

Put on by Kowalski, executive producer at Charlotte New Music, the show uses a combination of chamber orchestra, electronic beats, spoken word, and cirque performances to tell the story of a Russian astronaut’s voyage through the stars while revealing truths about life on Earth.

It’s not just Kowalski who’s behind this new production. Lost In Space is a combined effort of local Charlotte musicians and artists, including co-directors and producers Master Kie and RoyalCity Lif along with composer Scott McLaughlin.

Kowalski’s Your Neighborhood Orchestra provides haunting orchestral music while aerialist Stryx defies gravity on a lyra hoop as the astronaut.

“We want everyone to feel like they’re in another dimension for an hour and 20 minutes,” says Master Kie, who started the project with a seven-song album called Lost In Space: The Ludmila Diaries. “The point of my project was for you to listen and feel like you were up there with her. [With the collaborative performance,] we expanded that.”

Master Kie’s original album tells the story of Ludmila, an abandoned Russian cosmonaut. “Some believe she was the first female to successfully enter space,” the first track tells us. “When she was coming back to Earth, due to some technical failures, the space capsule caught fire and she sadly died. Her existence has never been publicly acknowledged by either the Soviet or Russian space authorities … it still remains one of the darkest secrets of the Cold War.”

Kowalski, Master Kie, and RoyalCity Lif saw potential for collaboration when the three performed at Stargazer Fest. Though they all have different styles, they agree that their strength as a team lies in their differences.

“When me, Kie, and Liz are talking about music, we’re all talking about the same thing but talking about it a little differently. We’re all open to pushing the envelope with this and lifting each other up,” says RoyalCity Lif, also an accomplished rapper in the local scene.

“You have different types of artists working on one stage, even though at the end of the day it’s seamless,” he continues. “You have classically trained musicians and you have hip-hop artists and spoken-word artists and movement artists.”

He emphasizes that each of the artists brings a unique perspective to the story, and that makes the message all the more powerful.

“People can sense the collaborative spirit we’ve developed and the love we’ve shared in creating this,” adds Kowalski.

Lost In Space came to be as an event after Kowalksi heard Master Kie’s album and envisioned her orchestration complementing it. Her goal is to channel an astronaut’s perspective.

“When you view earth from outer space there’s no borders, no bullshit, but when you zoom in you see the war, the money systems, the pollution — that keeps us separated,” she says. “We have everything we need to solve our problems, we just don’t work together. That’s what this show is about.”

“I’ve been working with a lot of these orchestra members for a decade, and I just said, ‘Try this with me,’ and they went along with it. I feel so thankful for that,” she says.

The orchestration is ethereal, futuristic and energetic, launching listeners above the atmosphere.

RoyalCity Lif was excited to add his beats to the project, and hopes the event can encourage more experimentation in Charlotte’s music scene. “People don’t collaborate enough. People aren’t brave enough to stretch their comfort zones. [Lost In Space] is a representation of being open to ideas.”

Kowalski says she felt adding dance would be a natural progression to enhance the storytelling aspect of Lost in Space. “I’ve always loved creating music for dance, and I love the pairing of visual and auditory stuff. I knew we needed an astronaut and the closest thing I could think of was a lyra [a type of acrobatics which uses an aerial hoop].”

The aerialist Stryx plays the astronaut Lumilda. She launches off the ground onto her hoop, spinning and jolting to embody the experience of a cosmonaut traveling through space. Along her journey she meets otherworldly beings and goes through an intense transformation while displaying breathtaking acrobatic skills.

The directors hope that Lost In Space will inspire wonder and connection in their audience. Part of the experience, they say, will be “having a conversation about what the hell just happened,” Master Kie says.

Lost In Space is a surprising mix of musical and performing arts. It is thrillingly disorienting and dramatically hopeful. Kowalski best describes what audience members can expect: “Get ready to go to space.”

Lost In Space is a part of the Charlotte International Arts Festival, which runs from Sept. 16-October 2. Tickets for the performance begin at $20. 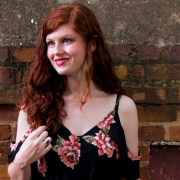