As I walk into The Alexander Building in Cornelius, I get the feeling I may be in the wrong place. I’m here to meet Matt Hylom, a local musician who told me the building is home to his studio, but as I navigate the green-carpeted hallways with wood-paneled walls, I can’t imagine this as the place where hip, new pop music is being made.

But when Hylom lets me in to Suite 210, it’s like I’ve returned from the Cold War era back into the 21st century. The recently renovated two-room studio has wood floors rather than wood walls. Leather couches face a bookshelf holding the likes of Dante, Tolkien and Dostoyevsky. Hylom’s first guitar, a Johnson he bought in 2000, hangs from the wall.

In the room where Hylom produces his music — or pays his taxes, as he’s doing on the morning I visit — two computer screens overlook his Akai Professional MPD218 drum machine. Four guitars and a ukulele lean against a rack to the right, while standalone sound-proof panels stand between the speakers and the windows.

It’s the room where Hylom produced “Comatose,” his first single of 2019. The song is a new direction for Hylom, whose last single “Headspace” was more of a beat-driven banger than the melodic, soothing guitar riffs on “Comatose.”

Next to that setup sits an empty dry-erase board sits waiting for him to finish his tax work and start jotting his thoughts about music he’s currently working on. I mention that it’s much bigger than the tiny board he used to brainstorm on in his NoDa home just three years ago.

“I’ve got a little bit more going on these days,” Hylom says, laughing. But he’s not kidding.

Since 2013, when he quit his job to focus purely on music, Hylom has become one of the most successful musicians in the world — at least within his market: the royalty-free music scene.

Royalty-free music refers to music that’s licensed and sold for a one-time fee. It’s used in commercials, YouTube videos and just about anywhere you hear background music — yes, including elevators.

Since he began experimenting with royalty-free music in 2016 as a way to fund his personal music career, Hylom quickly shot to the top of the royalty-free charts. Sure, they’re not the charts that music fans see, but the work has been fruitful for Hylom. His wife, Kirsten, who financially supported the couple with her nursing job while Matt pursued music, was able to quit her job at the end of 2018.

Everything changed for Hylom in August 2017, when one of his royalty-free tracks, titled “Uplifting and Inspiring Background Music for Videos & Presentations,” blew up almost as soon as he put it up for sale on AudioJungle, a website for royalty-free music.

The track, which runs just over two minutes and features an upbeat guitar loop over clapping, drums and a few “Hey!” expressions for good measure, quickly started racking up license sales. It would eventually become the most popular royalty-free song in the world for 2018.

“Things just went viral from there,” Hylom says. “I have another 85 tracks in addition to that one song, so the popularity of that brought my whole library up; my catalogue got a lot more traction.”

That song sold 8,000 licenses, including to companies like Honda and Ring, a doorbell security system. The ensuing attention brought Hylom’s royalty-free YouTube channel to 250,000 subscribers.

Hylom’s royalty-free music is just a means to an end, however, and his creative priority is still with his personal music career. He doesn’t shy away from talking about his royalty-free work, because in the end, he gets to make music for a living.

In 2019, Hylom will continue selling licenses through AudioJungle, but hopes to continue building the growing fanbase for his personal music. “Headspace” was a good head start, as it made Spotify’s Discover Playlist and reached 70,000 streams, exceeding his previous best of 12,000.

For Hylom, that’s what the game’s all about.

“I don’t like the idea of being in the underground, like only a niche audience knows who I am,” Hylom says. “I want my music to be heard by as many people as possible.”

That’s not to say that Hylom is selling out. Despite the success of “Headspace,” he’s taking his music in a new direction this year, or you could call it an old one. He says his new stripped-down style brings him full circle in a way, more like the acoustic songs he played when he just got his start as a singer/songwriter playing cover songs.

“I went as far as out as possible, just going crazy on these productions, like whatever comes to my mind I’m just going to do,” Hylom says of the music he’s made over the last year. “Now I’m honing it back to what I feel is the best representation of me, the best way I can get these songs out. It’s not like I’m trying to create a dubstep track but one that’s interpreted by me, it’s more like, ‘This is how I think this song should sound.’”

It’s not always that easy, though. Hylom was ready to do away with “Comatose” completely before a serendipitous phone call saved it at the last minute. Hylom had written produced the riff and written the chorus, but none of the verses he wrote would live up to his expectations.

Just when he was ready to move on, he got a call from Scott Mulvahill, a Nashville singer/songwriter friend with whom he had discussed potential collaborations in the past. 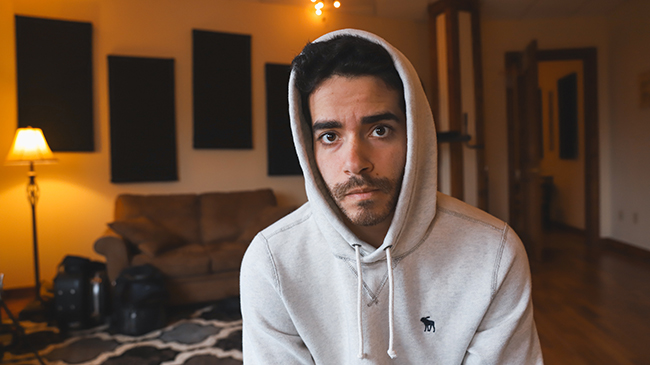 “I was like, ‘You know what, I’m just going to trash this whole project. I’ll write something else, this is just not working, I’ve got bigger fish to fry,’” Hylom recalls, “but Scott contacted me that day like, ‘Hey, you got anything to work on? I would love to work on something.’”

Hylom had never worked with a writing partner before, but he liked what he got back from Mulvahill. He eventually brought local songwriter Josh Kiser into the mix as well.

In the end, the process worked, and Hylom rescued the song from the trash bin with the help of his friends.

“Scott’s from Nashville, so it had this Nashville vibe to it. Josh is more pop, so it sounded like straight pop stuff,” Hylom says. “It was interesting to hear their takes. It wasn’t quite my take, but they lyrically had some good ideas, and I liked some of the intonations of the melody. It was just interesting to see how something that’s my work can take totally different life forms when interpreted differently.”

Hylom isn’t usually a fan of doing group work, but the experience with “Comatose” has him rethinking his ways. He says that collaborating during the songwriting process is something that he will look to do more of moving forward.
As for what’s next, Hylom will spend the next two months promoting the new single, then release another one. He’s not big into releasing albums or EPs, but would rather spend his time pushing one song at a time, steadily building his fanbase online.

“My fanbase is actively growing, and so I can put more effort into promoting a specific song as opposed to releasing a set of five songs and then having to pick and choose how much I really push,” he says. “For me, at least in this season of my life, I’m super busy with the production, with the royalty-free stuff, and I want to concentrate on one song at a time and then release them consistently so there’s a consistent flow instead of there being a year gap between EPs.”

He’s got three songs lined up for release at the moment, so that will get us through to June. It’s good to know that if he hits a wall between then and now, he can always call in some friends. It’s just all about getting in the headspace.

On the Nines Makes it Worth the Long Drive