In a last-minute reprieve for hemp farmers and distributors across the state on Wednesday night, the North Carolina General Assembly passed a law to legalize hemp statewide — just a day before a pilot program that had legalized it in the first place was set to expire.

In April, we reported on the potential that language included in state law exempting “industrial hemp” from the definition of illegal marijuana would expire, and if allowed to do so by legislators, the new law that would take effect on July 1 would make all forms of cannabis, including hemp, illegal.

On Wednesday, the NC Senate approved Senate Bill 455, which tracks the 2018 Federal Farm Bill’s definition of hemp, in a 41-2 vote. The bill had passed through the NC House in an 85-26 vote on June 1. Gov. Roy Cooper signed the bill into law on Thursday.

“Agriculture is North Carolina’s largest industry and giving North Carolina farmers certainty that they can continue to participate in this growing market is the right thing to do for rural communities and our economy,” Cooper said in a news release.

In April, Crowntown Cannabis co-owner Michael Sims told Queen City Nerve that inaction from the state legislature would “not only kill us, they [would] kill this industry, they [would] kill our business.” On Friday, he was thankful for the last-minute vote, but skeptical of the intentions of state lawmakers.

“I’m happy with the turnout of this issue, although this could have been resolved months ago. Once again certain NC politicians used the existence of our industry as leverage to get a vote on the horrendous SB711,” Sims said, referencing a bill that would legalize medical marijuana in the state, but in a way that would effectively shut out independent hemp farmers and others in the hemp industry from participating, and could push them out of the cannabis industry altogether.

“However, we still need to fight aggressively to get access to legal adult-use cannabis,” he continued. “The citizens of this state overwhelmingly want cannabis to be completely legal. Today is a win but we know better than to let our guard down.”

On Thursday the Supreme Court announced it will take up Moore v. Harper, a North Carolina election case that could empower state legislators to determine election results.

Republican state lawmakers in February appealed the North Carolina Supreme Court’s decision to throw out a map delineating the state’s 14 U.S. House of Representatives districts, which were approved last year by the Republican-controlled state legislature. Now if the ultra-conservative Supreme Court rules in favor of Republicans, the case could give state legislatures far more power over federal elections by limiting the ability of state courts to review their actions.

In a Twitter thread on Thursday, historian Dr. Kellen Heniford, PhD, made clear the implications that this case could carry: “The Supreme Court taking up Moore v Harper next year signals the end of (this phase of) constitutional democracy, to the extent that it ever existed. It would allow gerrymandered legislatures to overrule the vote and allot electoral college votes themselves. You can’t ‘vote harder’ your way out of that. It’s staring us in the face. If the Biden administration wants to do something, it probably only has until January 2023 to do it.”

Charlotte Hornets star forward Miles Bridges was arrested in Los Angeles on charges of felony domestic violence on Wednesday. According to TMZ, Bridges turned himself in the day after police responded to a call about a woman who had been assaulted during a physical altercation, later reported to be his wife, Mychelle Johnson.

An Instagram post from Johnson on Thursday showed the injuries she sustained in the altercation and paperwork from the hospital where she received treatment listing her diagnosis as, “Adult victim of physical abuse by male partner; Assault by strangulation; Brain concussion; Closed fracture of nasal bone; Contusion of rib; Multiple bruises; Strain of neck muscle.” 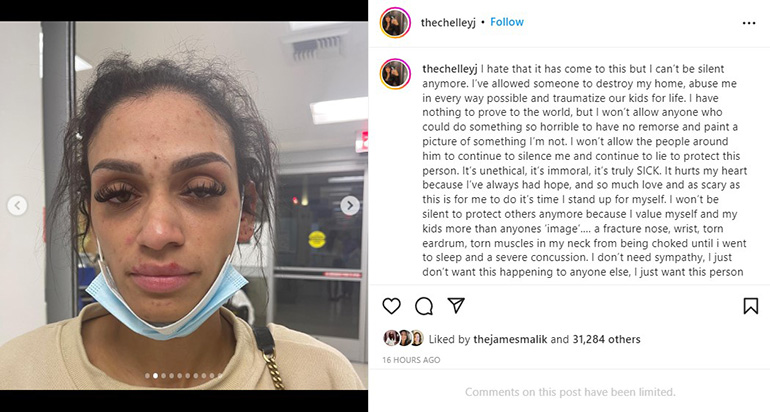 “I hate that it has come to this but I can’t be silent anymore. I’ve allowed someone to destroy my home, abuse me in every way possible and traumatize our kids for life,” Johnson wrote. “I have nothing to prove to the world, but I won’t allow anyone who could do something so horrible to have no remorse and paint a picture of something I’m not. I won’t allow the people around him to continue to silence me and continue to lie to protect this person.”

Bridges is currently a restricted free agent, meaning he can explore options with other teams but the Hornets have the right to match any deal he is offered. He is yet to comment on the arrest or allegations. In a short statement, the Hornets said they are aware of the situation and currently gathering more information.

CMPD has arrested a suspect who they believe shot an officer responding to a call in NoDa early Tuesday morning.

A bartender told WSOC that the man was in the bar and, when told to leave around 2 a.m. so the bar could close, he became belligerent and opened fire on one of the people working security there. Police were called to the scene and, upon their arrival, the suspect shot an officer in the leg. The officer has since been treated and released from the hospital.

Later that day, police surrounded a home on Ruth Drive in the Shannon Park neighborhood of east Charlotte, where they eventually arrested the suspect, a 32-year-old man. He has been charged with discharging a weapon into occupied property, two counts of attempted murder, and two counts of assault on a law enforcement officer.

Three men died in separate acts of gun violence this week, marking a bloody end to the first half of the year and putting the city on pace to see 102 murders by year’s end, which would be an increase from the 96 recorded homicides in 2021.

Shortly after 5:30 a.m. on Monday, police responded to assist Medic on Merry Oaks Road near the intersection of Central Avenue in east Charlotte where they found 34-year-old Wayne Byrd unresponsive from a gunshot wound. He was pronounced dead at the scene. Just before 10 p.m. that night, police responded to a shooting call on Bennettsvile Lane in the Derita area of north Charlotte, where they found 18-year-old Daishawn Bessent suffering from multiple gunshot wounds. Medic transported Bessent to the hospital, where he later died.

Just before 1:30 a.m. on June 29, police responded to an assault call on Westbury Lake Drive in the Radbourne Lake apartment complex in north Charlotte where they found 21-year-old Jonathan Luke Edouarzin suffering from a life-threatening wound. Multiple outlets have reported Edouarzin was shot but CMPD did not confirm. He was pronounced dead at the scene by Medic. CMPD stated that, “The suspect in this case remained on scene and cooperated with officers.” No additional suspects are being sought.