Winter is the season for red chile enchilada sauce. You can almost smell the pinon and juniper smoke drifting from the leaky wood stove, as your mouth explores the profound depths of a good red chile made from scratch. In addition to Mexican-style foods, a good enchilada sauce is good and many more foods that you may not think of offhand, like baked potatoes and squash, roast fatty meats, scrambled eggs, and anything savory.  Enchilada, after all, being the past participle of enchilar, simply means “covered in chile.” Enchilar literally means “to put chile on something.” In the popular dish enchiladas, named after that verb, that “something”  is corn tortillas.

You can find the ingredients for a good red chile nearly everywhere, from the bulk section of Whole Foods to the “Ethnic foods” aisle of a small-town supermarket with little more than salsa, soy sauce and ramen. We aren’t going to call it “chili,” by the way. The Mexican word for the plant from Mexico is “chile.”

In Spanish language slang, enchilada can mean red-faced and triggered. And researchers have determined capsaicin does indeed trigger endorphins, the rush of which has been compared to those of sex, drugs, rock and roll and runner’s high, depending on what you’re into. Endorphins can dull pain, too, including, fortuitously, the pain of hot chile.

I once fed cayenne powder to my chickens to make their yolks extra-red, just to see if it could be done. Although they didn’t taste spicy — the capsaicin doesn’t make it to the eggs, even though the beta-carotene does — those yolks, grammatically speaking, were enchilados.

The world’s first enchiladas were little more than tortillas dipped in chile sauce. Generations of Mexican chefs took this initial breakthrough in countless directions. Chips and salsa is one derivative, although some might argue the chips are actually entomatadas, aka treated with tomato.  (Not to be confused with enfrijoladas, covered with beans).

I’ve got some red chile drying in my living room, strung up in ristras New Mexico-style. The peppers are Italian Long Hots, a thin, crinkled chile that’s like playing Russian Roulette because you never know when one will be searing.  It’s a great pepper for red chile sauce, but most any whole pod will work. If you can’t get whole pods, substitute ground chile, the redder the better.

If you eat as much chile as I do, you must pace yourself. I don’t go for the extra-hot chile. Sure, I can handle it, but I prefer a session chile that keeps me on the edge of my seat, but won’t slow me down.

At some point, folks like myself might as well concede that we aren’t actually applying chile to this or that substrate, because chile IS the substrate. And all the other stuff like tortillas, chicken, cheese, et al, are all just different ways to season and decorate the chile.

But until then, we’ll keep calling it red chile enchilada sauce, which if you think about it, is redundant.

While most New Mexican red chile recipes are thickened with a little flour, I prefer corn masa, the same stuff tortillas and tamales are made of. Masa is a flour made from corn treated with calcium hydroxide, an ancient process (it used to employ wood ash) called nixtamalization that gives the cornmeal a creamier texture.

I gently fry the masa in butter into a roux. It’s noticeably easier to manage than a flour-based roux and has a fun, smooth foaming action that will develop a nutty brown color and flavor, and doesn’t seem eager to burn.

Just a few spoonfuls of masa adds a distinct dissolved tortilla flavor that is so noticeable I often skip making the “whole enchilada,” if you will, and simply apply this thick chile sauce to my choice of protein. I’ll garnish with onions, cilantro and avocado and call it good.

Heat the stock to a simmer. Add the cleaned chile and simmer 10 minutes. Then let sit for an hour.

When it’s cool, add to a blender with the oregano and garlic, and blend until smooth. It will coalesce into a magical, near translucent state of chile gel that’s thick like a good pudding. Some cooks will call it good and stop here.

Heat the butter and oil in a saucepan on medium heat. Add the masa and stir it into the oil and butter. When it starts to brown, add the onions and a cup of water. Cook until the onions are translucent, stirring as necessary to prevent sticking; about ten minutes. Then add the chile blend and heat to a simmer. Keep it there 5-10 minutes, stirring often. Don’t overcook. You want to keep that bright red hue.

I prefer to make stacked enchiladas, rather than rolled, as it’s so much easier. You just fill a tray like making a lasagna. Heat the chicken in the chile sauce for a few minutes before layering it all together with tortillas and cheese. Bake at 350 degrees until the cheese melts, and serve garnished with raw onion. 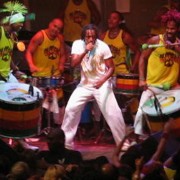