As a teenager in Cold War-era Germany, Phil Lomac witnessed the Berlin Wall come crashing down. That may be why the now 45-year-old singer-songwriter and multi-instrumentalist’s music is so eclectic, displaying little regard for the self-imposed barriers of genre.

In fact, Lomac admits that his music might be just a touch too varied.

Lomac has been either performing solo or playing in North Carolina bands since 1993. His three solo records have garnered critical acclaim for their mix of alt-rock and roots music with his most recent release, 2017’s Northern Cities, Southern Stars, playing like a post-punk update of Bare Trees-era Fleetwood Mac. One of his groups, Senatobia, was a top 10 DIY pick from print publication Performing Songwriter in 2003. But for marketing purposes, Lomac’s pensive, hand-crafted modern guitar pop is hard to pin down.

Instead of focusing his sound into a specific genre, Lomac draws on music he likes and artists he respects — ’80s new wave, the alt-country rock of Wilco and the ’70s Laurel Canyon sound exemplified by singer-songwriters like Neil Young and Jackson Brown. After performing and making music in Charlotte, Asheville and Montreat, Lomac will play a different kind of Queen City gig on January 24 at Petra’s, one that illustrates his advocacy for breaking down barriers between music styles and performers.

The show is a reunion of sorts, Lomac explains, a triple bill of colleagues and fellow regional music veterans whose paths have crossed multiple times over the years. Joining Lomac at the Plaza Midwood venue will be Asheville’s Laura Blackley, along with Marc Higgins and the Chainsaw Bears from Spartanburg, South Carolina, a band that has been likened to a Southern version of ramshackle indie punk godfathers The Replacements.

Lomac says he met Higgins during his tenure with Senatobia, which ran from 1999 to 2004. Higgins ran a club, The Guitar Bar, in Spartanburg. When Lomac played the venue, he hit it off with the club owner and fellow musician.
“He knew how to treat musicians, and how to make [playing a gig] a good experience,” Lomac remembers. “In a business where you can meet some of the nicest people on earth, as well as some of the biggest assholes, you tend to connect with the nice ones.”

Around the same time, Lomac met Blackley, when the two shared a bill at an Irish bar in Asheville. Before becoming a performer herself, Blackley had been a music writer for the Asheville Citizen-Times and the local alt-weekly, Mountain Xpress.

Lomac unabashedly credits his own eclectic leanings to growing up in the shadow of the Berlin Wall. His parents were missionaries who moved their family to the divided city when Lomac was just four years old. He lived there for 15 years, just long enough to see the barrier bisecting the city come down in 1989. Lomac remembers Berlin as a melting pot of people from all over the world, a crossroads of creativity, art and activism. Artists and musicians were on the forefront of the struggle to unite the two Germanies and end repressive Communist control. Lomac was exposed to a broad swath of music in Germany, everything from political punk to the activist reggae of Burning Spear.

“Seeing that music and art can have this impact, [that] it can change things at a very basic level, was ingrained in me early,” he says.

Concurrently, Lomac picked up his father’s acoustic guitar and taught himself to play from a John Denver songbook tucked inside the guitar case. The very first record Lomac bought was Jimi Hendrix’s Live at Fillmore East, an incendiary performance that solidified Lomac’s love for guitar.

When some older kids at high school started a band and needed a guitarist, Lomac started jamming with them and got hooked on making music.

When Lomac was 17, his parents semi-retired from their ministry work and moved to Charlotte, where Lomac finished his senior year at Garinger High School. He subsequently attended Montreat College near Black Mountain, where he joined his first real band as lead guitarist, the Brown Root Seed Company. It was his first experience playing live shows and going out on the road. The group eventually ran its course when members finished college and moved on. After three years at Montreat, Lomac transferred to the University of North Carolina Asheville, where he switched his degree from environmental journalism to creative writing.

After graduating from UNC-A, Lomac settled in Asheville, where he met local musician Ron Neill. Neill was recruiting players for a touring band, so Lomac became guitarist for Ron Neill and the Eleventh Hour for a few years until that band also ran its course. At this point Lomac decided to try his hand at being a band leader and primary songwriter for a group. He approached the bassist and drummer who had played with him behind Ron Neill. Together they formed the three-piece Senatobia.

It was Lomac’s most serious project to date. For five years the band toured extensively, up and down the East Coast, across the southeast and into the Midwest. Performing Songwriter Magazine picked one of their CDs for their DIY top ten — exemplary releases that didn’t come out on a major label.

As with most bands, there were plenty of highs and lows, but over time the lows took their toll, Lomac says.

“We had some big opportunities that would have put the band in a good place, but then they fell through,” Lomac remembers. “It [was] hard to get everybody motivated to start all over and do it again.”

In addition, Lomac was ready to give a solo career a shot.

“It was the right time to try something different and have more control of the process — what the songs should sound like and how they should be recorded.”

In 2005, he released his first solo album, phillomac. A song from that collection, “No Connection,” made it onto the soundtrack of the regionally produced horror movie Stitch. Lomac recalls that the tune played over the closing credits, but he’s not sure if the movie ever received distribution.

While Lomac played solo shows, he also sat in with Asheville post punk outfit Bugs Multiply, but soon he was ready for another change. In 2004, he had married Jody Pedersen. The couple moved to Chicago in 2007, so Jody could continue her studies for a degree in medicine. Up in the Windy City, Lomac started working as director of operations for Inventables, a company that makes software and machines for carving designs in wood, tile and stone.

He also dropped his second solo release, Strangers Funeral, in 2009. With a drummer friend named Andy Angelos, Lomac also started the band Lovely Tyrants. Tied in with the group was a Kickstarter crowdfunding campaign to launch Tea for Tyrants, a green tea company that supported indie musicians from around the globe. 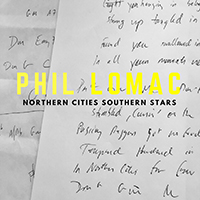 Lomac and his wife moved to Charlotte in 2013 to be closer to their families. His mother’s side of the family is from Charlotte, while his wife’s family lives in Brevard. But work brought Lomac back to Chicago for part of 2015 and all of 2016, and there he recorded Northern Cities, Southern Stars, tracking quieter material at his Lakeview apartment one mile south of Wrigley Field and louder material at the 100-year-old Unity Lutheran church in Edgewater, which houses an affordable studio space for artists and musicians.

The album is truly a one-man band effort, with Lomac producing, engineering and playing guitars, bass, keyboards, banjo guitar, and programmed percussion. From the ringing new wave-inspired title track to the sinewy twanging “Read the Message,” the result is Lomac’s most carefully produced and arranged project to date. Writing for MusicNews.com, Jon C Ireson said the seven-song super EP delivers “a poetic reflection on modern life through an acquiescent but hopeful voice.”

Upon his return to Charlotte in 2017, Lomac found inspiration in Roadmaster Stage Presents (RSP), a live music venue in Black Mountain.

“A guy named David Boughner books house shows,” Lomac explains “He has a stage in his back yard.”

Boughner books everything from local acts to national artists like Jim Lauderdale, and that he’s recently seen crowds of 150 people or more come to Boughner’s back yard for hours of music, food and drink.

“It’s a lot of people who have been playing in this region for a long time coming back together,” Lomac says.

Feeling inspired by RSP, Lomac wondered if he shouldn’t try something similar. The result is the triple bill of Lomac, Blackley and Higgins coming to Petra’s. The trio has already played a show in Spartanburg last December, and after Petra’s they hope to hit Boughner’s Roadmaster Stage in the spring.

Unlike the one-man-band approach on his most recent album, Lomac plans to put together a full band for the Petra’s show. He’s recruited Sean O’Shields of Greenville, South Carolina, band Little Leslie & the Bloodshots on pedal steel and guitar. Lomac’s drummer Matthew Carter has played with Gigi Dover. Electric guitarist Craig Hanks ran sound at the Double Door. Charlotte artist, painter, musician and producer Chris Liberti will play bass, and he’s also producing Lomac’s new recordings, currently in progress. Lomac hopes to release the new material, which will also feature a full band, in the spring.

As with all his musical efforts over the past 25 years, Lomac hopes people enjoy the tunes, but he also aims that amid the enjoyment, a message comes through.

“I always hope that people take away that the lyrics have some depth and meaning, that I put some time and effort into them,” Lomac says. “The lyrics are the backbone of the songs.”

'The Norwegians' Quench a Thirst for Blood