If you haven’t heard of Karol G by now, you’d better start paying attention. The Colombian singer, who topped the 2021 most watched list on Vevo with 3.11 billion views, has been selling out concerts around the country, including Madison Square Garden last year during her Bichota Tour and Charlotte’s Spectrum Center on Tuesday night as part of the $trip Love Tour.
Arriving to the stage after being lowered down on a massive barbed-wire heart, Karol G brought a non-stop Latin dance party to the Queen City. Flanked by scantily clad backup dancers, Karol G had the arena singing along to every song and dancing in their seats.
Don’t speak Spanish? It doesn’t matter. Described as a reggaeton and Latin trap artist like her Puerto Rican counterpart Bad Bunny, Karol G’s music transcends language.

Meanwhile, fans inside the arena were oblivious to the confusion happening just outside after a CMPD bomb-sniffing dog “alerted” to a smell coming from a trash can outside of Spectrum Center near the Charlotte Transportation Center. After an investigation that took well over an hour, no threat was found, and fans exiting the arena later were none the wiser.
Be sure to check out Queen City Nerve’s Soundwave, Charlotte’s most comprehensive live music listing, so you don’t miss out on any shows or concerts coming up. And hell, if you’re looking for something else to do, you can check out our events page as well, which runs the gamut of things to do in Charlotte. You don’t ever have to be bored again. You can check out more of Jeff’s pics and live reviews here. 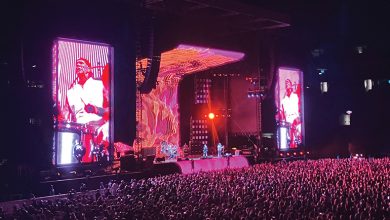