It’s hard to believe that it’s been 11 years since Willow Smith released her debut single, “Whip My Hair.” A lot has changed since then — as have we all since we were 10 years old). Smith, now 21 and performing as WILLOW, has shed the popstar image (and her long hair) in favor of a new pop-punk persona that’s far more fitting, as she performed at Fillmore in the AvidxChange Music Factory on Wednesday, Dec. 1.

Even the song “Whip My Hair” itself is a hint of its former self. Kicking off her set with “Transparent Soul,” Smith commanded the stage and made use of every inch of it — pacing back and forth, dancing around, and strutting her moves like Jagger — while whipping the crowd into a frenzy.

Her stage presence might be genetic, as the offspring of Will Smith and Jada Pinkett Smith, but she’s clearly creating a path of her own. Worth noting that the show was opened by the energetic family foursome We Don’t Ride Llamas, an Austin-based rock band that coined the term “shillelagh music” to describe the variety of musical genres they embrace; and a brief three-song set from singer/guitarist Anchor Thought.

Be sure to check out Queen City Nerve’s Soundwave, Charlotte’s most comprehensive live music listing, so you don’t miss out on any shows or concerts coming up. And hell, if you’re looking for something else to do, you can check out our Lifeline as well, which runs the gamut of things to do in Charlotte. You don’t ever have to be bored again. You can check out more of Jeff’s pics and live reviews here. 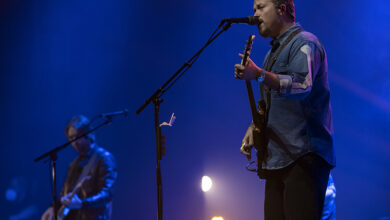