Local indie rockers Modern Moxie took an electronic turn in the title track to their upcoming debut album, Claw Your Way Out. The song, which is streaming below, uses more synth than fans of the foursome might be used to, but according to front woman Madison Lucas, it’s a sound they can get used to.

Inspired by her love for Canadian rock band Metric, Lucas picked up a Korg Minilogue keyboard at Sam Ash music store in south Charlotte last year that she named Kylie Minilogue. The band worked it into three of the 10 tracks on the album, which will drop on June 7.

“We’ve been trying to work that in … it’s like a new toy,” Lucas said. “I use it in ‘Believers in Sound,’ ‘Claw Your Way Out’ and ‘Bones,’ so all those sounds are coming out of that. I’m loving synth, I kind of want to move more in that direction with electric sounds.”

Modern Moxie — which is rounded out by Lucas’ husband Harry Kollm (bass) and original Serfs members Phil Pucci (guitar) and Charlie Weeks (drums) — spreads things out with a wide range of sounds through the rest of the record, with plenty of the ’90s alt-inspired rock they’re known for, as Lucas belts out lyrics that look back on her struggle with stage fright and anxiety.

Stay tuned to qcnerve.com for a full Q&A with Lucas in the lead-up to the full album release next week. We’ll discuss confronting anxiety during her come-up from closet musician to open mic singer/songwriter to front woman, the band’s formation and their awesome new album.

Claw Your Way Out will be available on vinyl and digital formats on June 7. It’s available for preorder here.

Modern Moxie will play an album release show on June 8 at 9 .m. with Faye, Future Friend and Sweat Transfer at Snug Harbor, 1228 Gordon St. Tickets are $5. 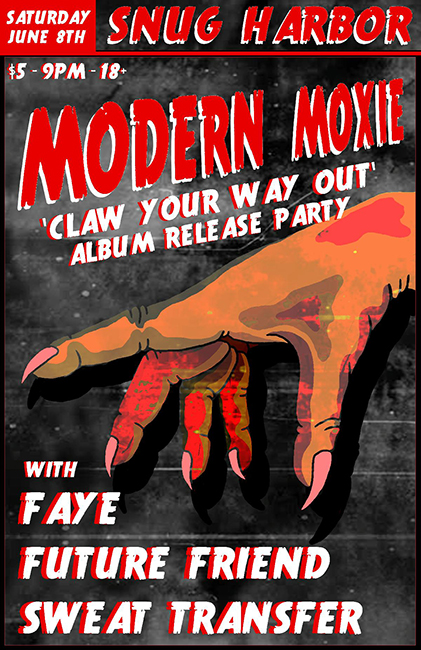