It may be time to rethink who the most famous reindeer of all is after this year’s can release of Sycamore Brewing’s annual Christmas Cookie Winter Ale small batch. Winter is a spectacular time for beer, as spice and flavor make for delicious classics — like Highland Brewing’s Cold Mountain Ale, for example — but branding is also important in a season built on marketing and consumerism.

Despite the popularity of Christmas Cookie, Sycamore has already built even more buzz around the seasonal ale with a new can design for this year’s release. The local brewery switches up cans each holiday season, and this year they included a handful of pixelated reindeer in different sexual positions surrounding the Sycamore logo in an ugly Christmas sweater pattern. At first glance you may not notice what Sycamore co-owner Sarah Brigham calls an “animal Kama Sutra.”

Sycamore releases the 7.5% ABV beer annually in late November — Nov. 23 this year. Brewers load actual sugar cookies into the mash, a hot-water steeping brewing process in which flavors are added, malts are activated and grains are turned into sugars that will soon ferment to give the beer a true authentic Christmas flavor.

There is sure to be some backlash from distributing a product that has reindeer fucking printed all over it, as some folks are hot and bothered about it — but not in the good way that the reindeer are. We saw a few folks on social media say that Harris Teeter had already recalled the cans, which we could not confirm, though a spokesperson with the grocer said it’s common practice for the company to pull an item with lewd renderings in a brand design. Harris Teeter does carry Sycamore beers, though the spokesperson said they could not confirm the reports of a recall at the time of publication.

[Update: A Harris Teeter spokesperson confirmed that the item was received at two stores and their 201Central location in Wesley Chapel and was not displayed, but sold by request only.] 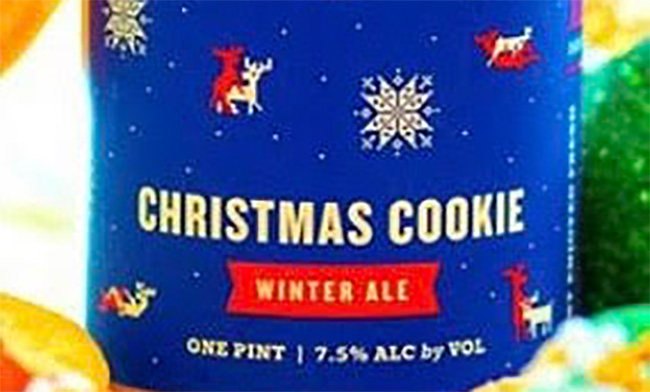 The fact that male reindeer lose their antlers in the winter makes this can design all the more Sapphic-erotic, but we’re sure the uptight folks bothered by this didn’t even get that far.

Brigham confirmed that one retailer did preemptively ask that the product not be delivered to their stores this year, though she did not name that retailer. It doesn’t look like it will make a huge effect, however, as Christmas Cookie wasn’t intended for large-scale distribution this year. The beer will be served in the Sycamore taproom and a few select bottle shops.

The design process for Sycamore’s beers is a collaborative effort, Brigham said. The team works closely with the brewery’s design firm, Shepherd, and lead designer, Kendrick Kidd. This can art was born of an idea originally planned for the annual release of Naughty Bear, appropriately, but when the brewery scrubbed that brew for its Beach Shack Coffee Vanilla Blonde, Sycamore staff agreed that Christmas Cookie would be a fun fit for the theme, Brigham said.

Though subtle, the design was not meant to go unnoticed. Brigham said that after closer inspection, the team hoped it would make you smile. “Beer is an adult product and is supposed to be fun, after all,” she reminded us. We couldn’t agree more.

Dorothy Counts-Scoggins: Lifetime Achievement in Best in the Nest