Sam Guzzie has a clear memory of the first mural she ever painted.

She was 15 years old and lived in Philadelphia at the time. Her grandmother’s friend lost a son to gun violence and decided to board up the windows of her home to keep the rest of the family safe. Guzzie’s grandmother asked her if she could paint the board to bring some light into the family’s life. Guzzie, a painter since childhood, had no idea what she was doing as a muralist, but she went for it.

All she had was her grandmother, who wasn’t an artist but a great cheerleader.

“When I was starting out I didn’t have a mentor or anything,” she recalls, “It was literally me and a wall just figuring it out with my grandma standing behind me like, ‘You got this!’ and me yelling, ‘Gramma, I don’t know!’ That was my experience.”

Fourteen years later, that mural, titled “The Dreamer,” still stands at the corner of North 23rd and Berks streets in Philadelphia. The experience would later help inspire Guzzie to create a platform for first-time muralists in Charlotte, where she’s lived now for five years, teaching them the ins and outs of mural painting, from important business tips to painting techniques.

Guzzie and her Brand the Moth nonprofit are currently in the final weeks of the first META Mural Residency program, a two-month session in which five local artists took part in interactive classes led by some of Charlotte’s best muralists before trying their hand at the medium with a community project at Queen’s University followed by individual murals of their own.

All of the META Mural Residency photos in the gallery below were taken by Gloria Zavaleta. 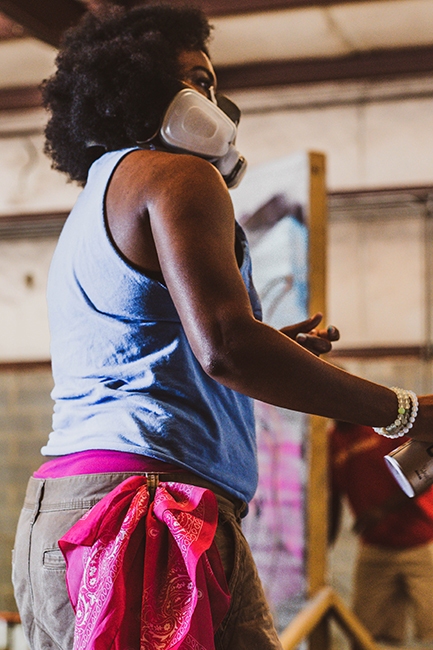 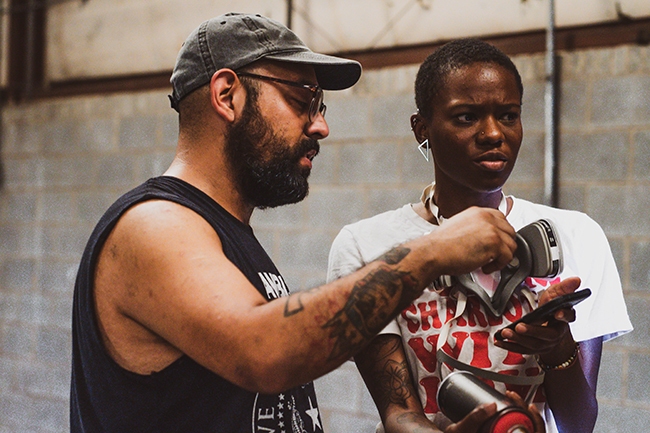 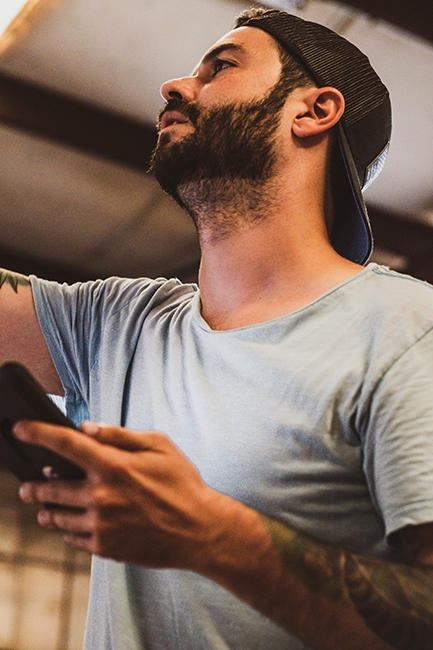 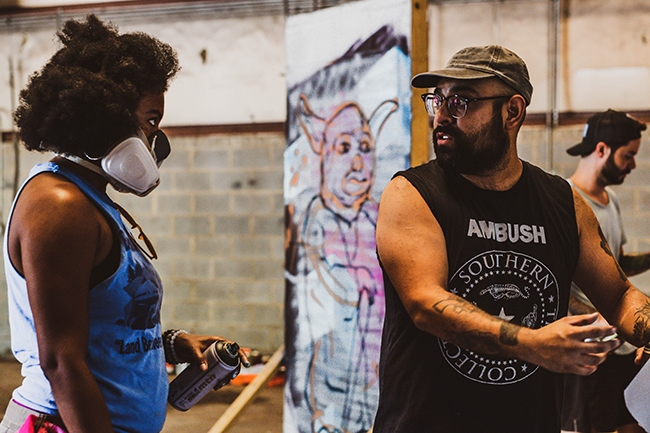 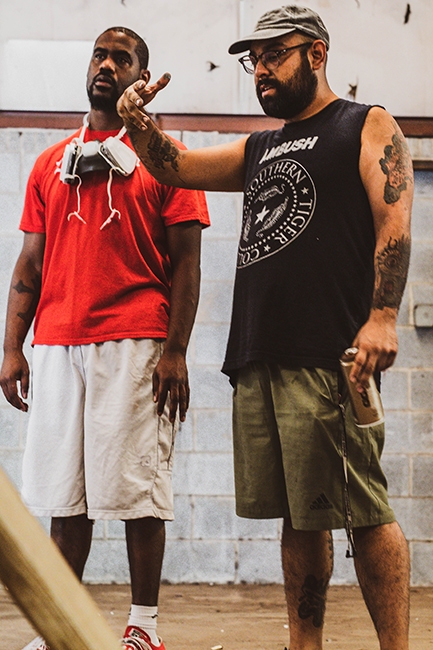 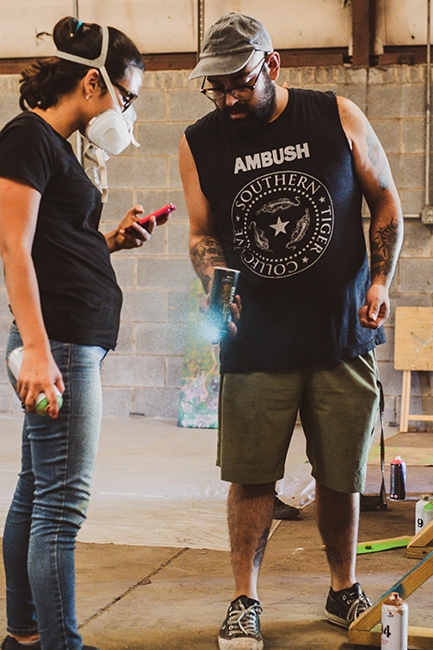 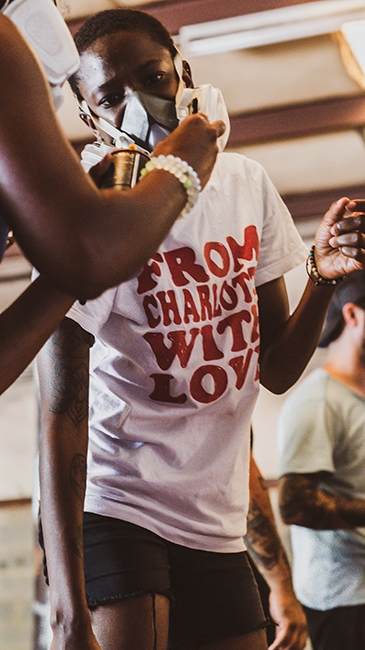 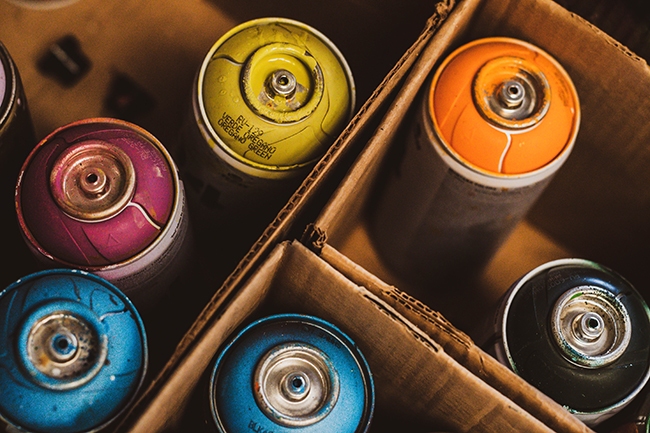 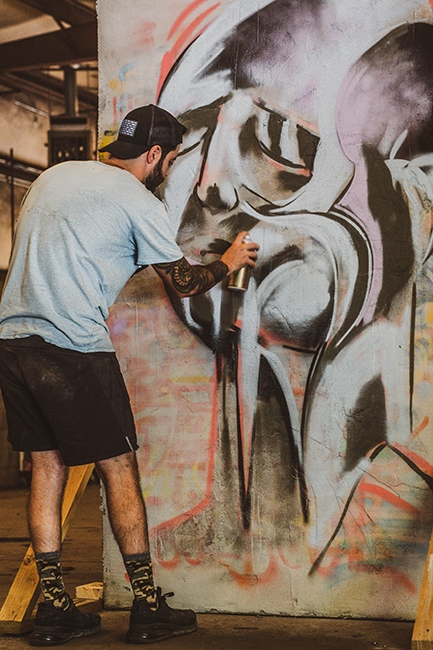 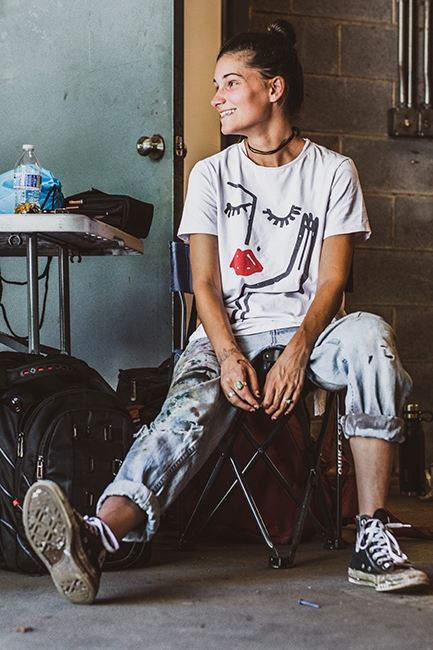 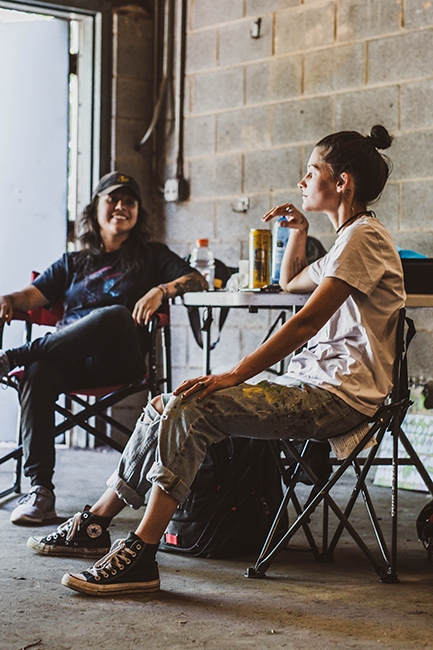 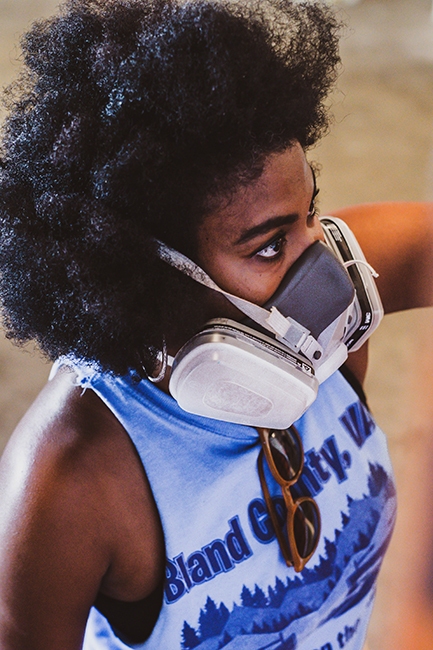 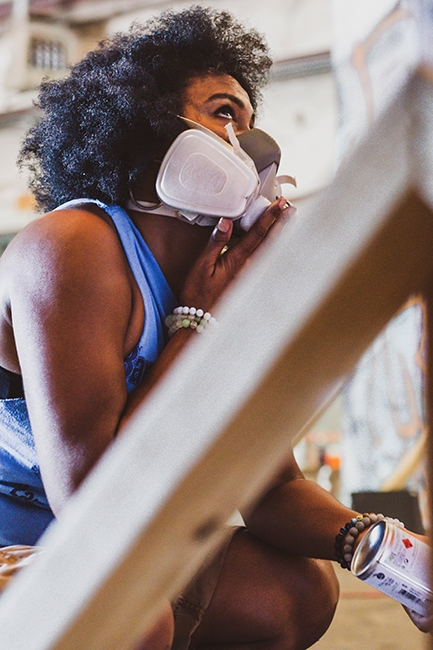 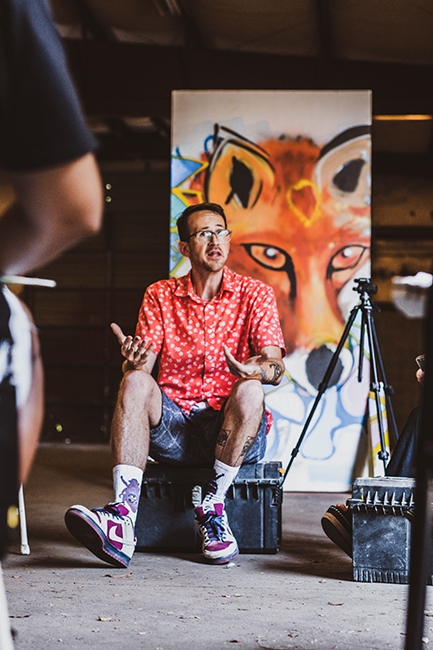 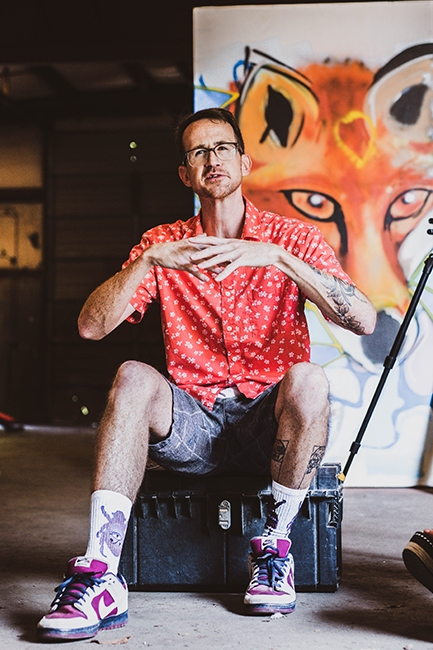 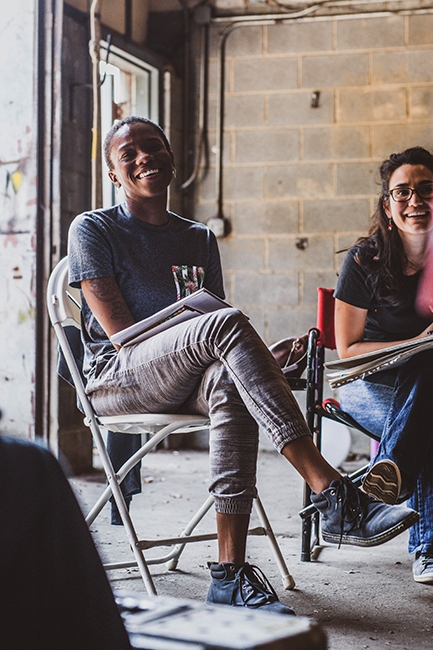 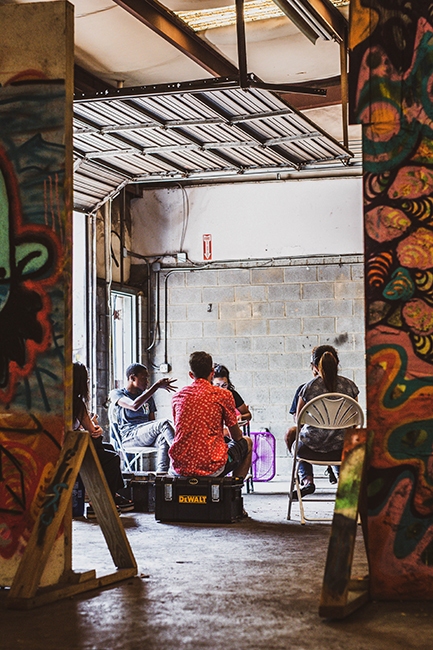 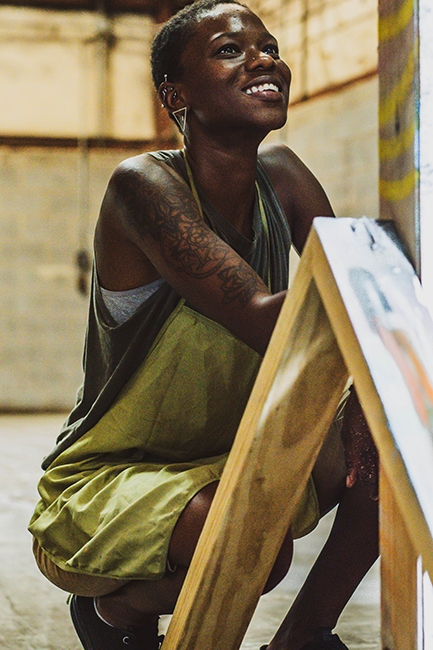 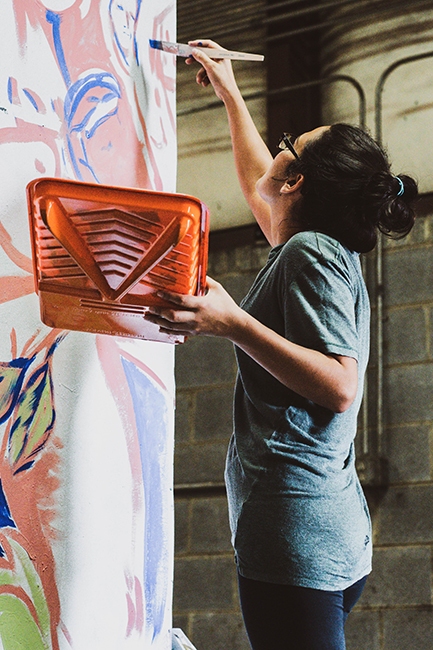 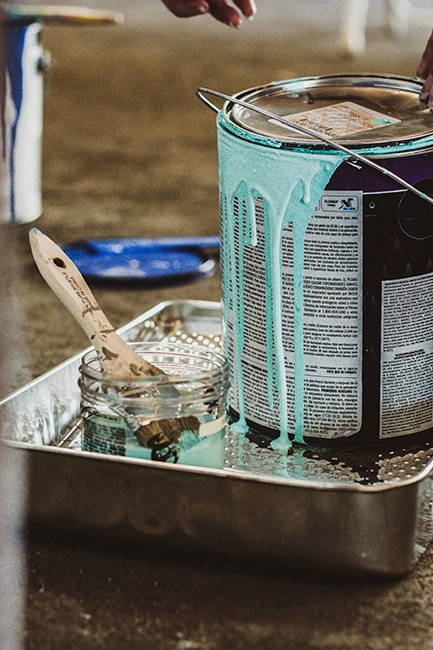 The paid residency is funded by a number of grants and awards, including from title sponsor Historic South End and local grant competition Seed20, from which Brand the Moth was awarded $10,000 in March. Funds went toward paying residents, teachers, photographers and videographers to document the entire process. In total, 14 local artists benefited financially from the residency.

But that compensation was secondary to the experience and knowledge gained, said many of the participating artists that Queen City Nerve spoke to.

Caricature artist and painter Lo’Vonia Parks has long been interested in painting murals, and when she heard about the residency through muralists Bree Stallings and Sharon Dowell, both of whom led META classes, she applied for a spot.

When we talked to Parks on the Queen’s University campus on a recent morning while she helped prep a wall between the campus maintenance building and Hadley Theatre, she called the experience “life-changing,” and ensured us that she was not exaggerating.

“I’m not the same artist or person that I was before entering this class,” she said. “We learned the business — from proposals, negotiations, contracts, to the history of street art and graffiti, — and we have literally applied techniques. We got to test out the paints, they taught us tips, tricks, safety. So all around, they gave us I’d say a year’s worth of knowledge in just four short weeks.”

It wasn’t just residents who learned a lot from the META experience. Queen City Nerve stopped by Sharon Dowell’s class on brush painting in a warehouse space in the Gold District of South End that was temporarily donated to Brand the Moth for classes during the residency.

Dowell, who’s done well-known local works by brush (including the bear in front of the Charlotte-Mecklenburg Library branch in Uptown and the mermaid mural on The Design Center of the Carolinas in South End) said she was taking in as much as she was giving out. During the previous week, she had attended a spray-painting technique class led by Southern Tiger Collective’s Alex DeLarge.

“A lot of it is about taking that ego out of it and just saying, ‘What can I learn from you guys?’ and vice versa,” Dowell said. “I think some of the most successful artists are ones that get that. Like yes, you have your style, you’re going after projects, you’re doing your thing and you’re confident enough, but there’s something nice about stepping back and working with other people and learning from other people and it really helps you become more successful.”

Such is the mission of Brand the Moth, launched by Guzzie in 2016 as a way to connect and uplift street artists after she found the city to have a strong underground scene that was struggling to be seen.

Guzzie moved to Charlotte from Philadelphia in 2014 after her husband took a job here. As she puts it, “I showed up here not knowing where it was on the map.”

Back in Philly, she had run a screen-printing business, a percentage of the proceeds from which went to funding the city’s existing street art programs. In Charlotte, she revised her business to include cards and other prints, then went looking for street-arts programming she could pitch in on.

“We were looking as to where to donate our money towards community and public arts and we didn’t really find a place that would do what we were hoping it would do,” Guzzie said. “There’s [Arts & Science Council], but our donations aren’t going to do anything for what they’re doing, comparatively. So I had the great idea of starting a nonprofit.”

Guzzie spent six months throwing herself into the local arts scene, meeting as many artists as she could — specifically muralists and graffiti artists — and asking them what was lacking and what efforts could make the biggest impact for artists in Charlotte.

She did find two big missing links in her discussions with artists: communication and collaboration.

“What I got back was communication mostly, that there was just a miscommunication between artists and business owners or the city in general, and that there was a lot of potential but a lot of artists didn’t know where to look for funding, didn’t know how to even get their first mural or how to continue doing murals,” Guzzie said. “So we really designed Brand the Moth to fulfill that in whatever way we could.”

Guzzie started with community projects: collaborative murals meant to bring together two segments of the population that may not ever get a chance to socialize. Brand the Moth’s most notable community project involved two groups that don’t always have a good relationship: police and the homeless population.

That partnership between Brand the Moth, Men’s Shelter of Charlotte, North End Partners and the Charlotte-Mecklenburg Police Department, among others, took a total of two years and led to murals on each side of the underpass at the bridge passing over North Tryon Street near East 16th Street.

Guzzie and local artist Lane Morris designed the murals based on town hall meetings held in the Men’s Shelter, then invited residents from the shelter and police officers to come paint them together.

“I’ve been painting murals since I was 15 and that was one of the hardest projects I have ever worked on, but in the best way possible, because I got to see people talking who normally wouldn’t be talking and they’re talking over a paintbrush and they’re telling stories about their history,” Guzzie said. “Watching guys from the Men’s Shelter explain to the police officers why they were uncomfortable with police officers and police officers hearing that and talking about that, it was a really beautiful thing to see — emotionally draining, but it was a really awesome project to see that, and that was the first time I was like, ‘This is how it needs to be.’”

Other Brand the Moth community projects have paired employees of digital marketing agency  Union with UMAR, an arts organization for adults with intellectual and developmental disabilities; and the White Knight Engineered Products with immigrant and refugee advocacy organization Project 658.

Guzzie is aiming to bring that community collaborative spirit to this year’s Talking Walls mural festival, for which she serves as president of the board of directors.

The festival was launched last year by local artists like Mike Wirth, who as head of the New Media Design program at Queen’s University played a large role in the META Mural Residency program, not only leading classes but connecting residents with Queen’s students to help design the community project mural on campus.

Though last year’s event included some community-oriented projects, Guzzie wants to build on that to involve more first-timers and amateurs in Talking Walls when it jumps off on Oct. 16 this year.

“This year our main focus was to make sure that we had even more community access to things,” she said of this year’s planning process. “There were some events last year like the [Johnston] YMCA in NoDa community paint thing, but this year we wanted to focus on that and put more of that out to the public so that more people know about it.”

Letting more people know about what’s going on in Charlotte’s art scene is Guzzie’s Brand, after all, as she emphasized while wrapping up one of our recent conversations.

“There are a lot of badasses around here and more people need to know that,” she said. “More people are seeing that, but I want everybody to know how many amazing artists are in Charlotte.”

She’s right, and she’d know because she’s one of them.

Serving the Culture is a Culinary Ode to Hip-Hop

A Night Fit for Queens