Zach Decker will always remember the first time he toured 917 Central Ave., mostly because he ended up having to help chase a bird out of the building.

The building was vacant and for lease, but needed work and the owner wasn’t willing to make the improvements. Despite its desirable location — in the Elizabeth neighborhood right on the borders of Plaza Midwood and Belmont — Decker and his business partner Chris Toler had to pass.

“It was terrible. The ceiling was black. The floors were black. The walls were — it was a nightclub that never got opened,” Decker said. “We were young, 20-something-year-old kids opening up a shop. We were just like, how would we even tackle something like this?”

The two were scoping out places for their tattoo shop, Seventh Sin Tattoo, that would eventually open next door at 927 Central Ave., on the corner where Central Avenue meets East 10th Street.

Nichols has since breathed new life into the long-vacant, 1937-built structure — most noticeably painting the brick exterior green. He also fixed the leaking roof, cleaned up the inside, replaced the doors and windows and revamped the existing marquee with a new design.

The improvements piqued Decker’s interest in the property, which is split into two 2,090-square-foot units that each have their own addresses: 917 and 919 Central Ave.

In May 2022, Queen City Nerve wrote about the efforts to bring a local business into the 919 address, and in August, Seventh Sin Tattoo expanded into the space, using it as an extension of their original shop next door.

Half the footprint of the new space is a lounge for artists with couches, a TV, kitchenette and computers for designing.

“I wanted it to be kind of where the artists can recenter and regroup after a stressful tattoo,” Decker said.

​​Decker said he and Toler had been talking about a second location for a while, but the onset of the COVID-19 pandemic threw their timeline off. Though he floated other spaces in the past, he said the opportunity to work with The Nichols Company and expand into 919 Central was the right decision.

“It made not only both shops better, but I think it made the team better and we’ve gotten to work with so many artists,” he said. “It’s been awesome being able to bring more members onto the team.”

The staff at Seventh Sin Tattoo has grown from six to 12 artists since spreading out into the new space. Decker said he was able to hire tattooers in the industry he’s always wanted to bring on but never had the room.

Not only that, but there’s enough room for guest spots for international artists and artists from around the country to drop in and tattoo as well, Decker said.

Seventh Sin Tattoo only occupies half of the building — 917 Central is still available for lease. Decker said his dream neighbor would be “something that can add to the flair of the neighborhood.”

“Something neat, something with some character, you know, something that the neighborhood can be proud of would be really cool,” he said.

In terms of expanding, Decker said there was no question he wanted his shop to stay in the Plaza Midwood and Elizabeth area. After all, he said, that’s where Seventh Sin Tattoo started and where it solidified its place in Charlotte’s tattoo scene.

Decker recalled the shop’s early days, when the only employees were himself, Toler and tattooer Tivis Phillips.

Compared to the days when they couldn’t afford a sign, now a mural of Thanos from the Marvel Cinematic universe, commissioned by the shop and put up by Southern Tiger Collective, acts as a landmark of arrival in Plaza Midwood for those coming from Uptown.

Seventh Sin’s success is a stark contrast to the recent fate of other small businesses along the Central Avenue corridor, like Charlotte Collective, which announced on Jan. 3 it would be closing its flagship Plaza Midwood location at the end of January.

The retail shop was the latest in a string of local businesses — Dairy Queen, Reggae Central, Elizabeth Billiards, Book Buyers, Soul Gastrolounge, Boris + Natasha, and Coaltrane’s Char Grill — that have been forced to move out of the area in recent years due to rising rent costs and redevelopment.

Decker acknowledges that Charlotte’s recent rapid growth has created a difficult environment for small business owners, and is sympathetic to those unable to weather the storm.

“The problem with becoming a main fixture is that when something new comes along you have to adapt, that’s business anywhere, you have to constantly be looking for new ways to engage or new this and that and that’s what we’re kind of seeing. And the rent is crazy. It is, absolutely,” he said. “But it’s just being able to be agile as a business person. You really have to keep your team small, your growth specific and everything well-timed.

“It’s not easy. You’ve really got to understand who you are and what you are. And I think that’s the secret to our success is for better or for worse we are us. We know who we are.” 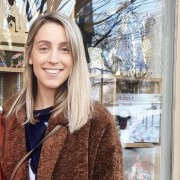