Like a trip to a fish camp on the evening after you’ve savored French cuisine, or a night out watching mud wrestling after an evening of ballet, Titus Andronicus is down-market fare for lovers of Shakespeare, even when compared with the gougings of Lear and the body count of Hamlet.

The last time we had a Titus play in Charlotte in the summer of 2013, Citizens of the Universe thoughtfully designated a “splash zone” at Snug Harbor, a clear warning that bloodletting would not be genteel, with axes joining the butchery alongside polite poignards. Pointy instruments just don’t cut it when you want to lop a limb.

ShakesCar’s production at Duke Energy Theater modernizes the setting, and director Chris O’Neill, doubling as costume designer, has his men looking like refugees from a motorcycle gang. Tamora, the captured Queen of the Goths who will be Titus’s chief tormentor after unexpectedly becoming Empress of Rome, gets a whole bunch of leather herself: the full tight-fitting S&M kit, removeable corset included. Titus’s daughter Lavinia, betrothed to newly crowned Emperor Saturnius until the Andronici are double-crossed, is the colorful opposite of the monochromatic Tamora.

After failing to watch her tongue when addressing her victorious rival, Lavinia gets handed over to Tamora’s barbaric sons, Chiron and Demetrius. What happens next explains how Teresa Abernethy, playing Lavinia, became the poster girl for this gore-fest.

Like Evil Dead the Musical, the show that invented the Splatter Zone, COTU’s Titus winked at the comical aspects of hacksaw horrors, especially since they are more convincingly rendered on film. When the tongueless, handless Lavinia identified her assailants at Snug Harbor, it was a bit like watching a trick pony counting out how old she was. Many laughed out loud.

O’Neill is taking a grimmer view, though it’s hard not to laugh at times. Trusting the text, he and Henson leave the pentameters in place, but they don’t seem to trust the audience’s endurance. Among those missing in action are Titus’s loyal brother, one of Tamora’s sons, and various Andronicus kinfolk. Further cramping the flow, O’Neill divvies out the remaining roles to seven actors, half the number that appeared in Plaza Midwood.

Probably the most confusing assignment is the double-casting of James Lee Walker II as Bassanius, Saturnius’s brother, and Aaron, Tamora’s Moorish lover, the first instance of half-colorblind casting I’ve ever encountered. I’m not sure anybody in the audience realized that the new emperor had a brother. Then again, Jack Shanahan as Demetrius deflowers and mutilates Lavinia before resurfacing as her avenging brother Lucius at the final bloody dinner. Demetrius, at that point, is dinner.

More confusion was added by the actors. Because this was passionate Shakespeare, they felt compelled to bark, bellow and bluster instead of merely speaking intelligibly. The Teddy Roosevelt maxim, “Speak softly and carry a big stick,” would have been helpful to O’Neill and his players. We had few words, let alone coherent sentences, to work with in helping us to flesh out what was going on.

Kelly Kirk, in her cool seductive take on Tamora, showed the guys how it’s done, slinking around the stage with lubricious malignity, much closer to a purr than a bark when she spoke. Waiting for her comeuppance is a prime pleasure of watching this bloodbath to the end. Abernethy, with her flaming hair and colorful garb, had the look of a rebellious punk teen before her cheekiness backfired. Yes, she looked crushed by her beastly disfigurations, but you may find yourself shocked by her father’s remedy.

At times, there’s a mighty performance buried in the thicket of Cartee’s mangled verbiage as Titus, particularly when his over-the-top inclinations jibe with the warrior’s Lear-like madness. Walker improved toward the end in the Aaron half of his doubling, delivering his most indomitably evil speech with uncharacteristic clarity – though it was curiously transported from the end of the tragedy to a scene or two earlier. Henson and/or O’Neill may not have wished us to keep track of this villain. We do hear of how Tamora is to be dealt with in its rightful place in the final speech.

Amid their fogs of butchered verse, Daniel Brown as Saturnius, Maxwell Greger as Chiron and Shanahan as Demetrius vividly give us the flavor of these detestable carnivores. Collaborating with Cartee, Greger and Shanahan bleed brilliantly in their final moments as brothers. After those beautifully triggered spurts, we can thank Shanahan as Lucius for dispatching Saturnius. That vile emperor was the last living pustule at the banquet. After his picturesque demise, we’re merrily sent home.

Sorry, I exaggerated that last sentence. It’s hard not to be caught up in the excess.

The 2021 Charlotte Fall Arts Guide: A Return to the Stage 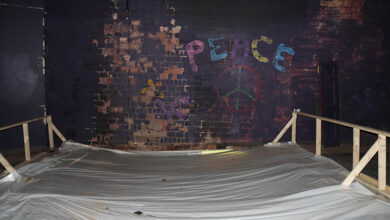 Best in the Nest 2021 Nomination Round