Mecklenburg County Sheriff Garry McFadden held a press conference on Wednesday to address criticism from federal officials over his jail’s policies. McFadden came under fire from officials with Immigrations and Customs Enforcement (ICE) and U.S. attorney Andrew Murray last week after an undocumented immigrant was released from the Mecklenburg County jail for a second time despite having a detainer from ICE requesting to keep him in custody.

McFadden was elected last November after running on a promise to end the controversial 287g program, which kept undocumented immigrants in jail. McFadden has repeatedly stated that he will not honor voluntary ICE detainers, but will honor federal warrants.

The controversy began when ICE spokesperson Bryan Cox publicly questioned the Mecklenburg County Sheriff’s Office’s decision to release Luis Pineda-Ancheta after he was involved in a nine-hour standoff with police in May. It was the second time Pineda-Ancheta was released, despite ICE having filed a detainer against him. Pineda-Ancheta was arrested on Sunday and returned to the jail after ICE filed a federal warrant against him.

Murray publicly stated that he had doubts about McFadden’s commitment to public safety.

McFadden also challenged Cox’s statement that the sheriff’s office does not work with ICE at all, stating that his office makes a voluntary call to ICE when they detain a violent criminal who is undocumented. He handed out sample immigration detainers that he said are filled out and given to Department of Homeland Security when an undocumented person is arrested. 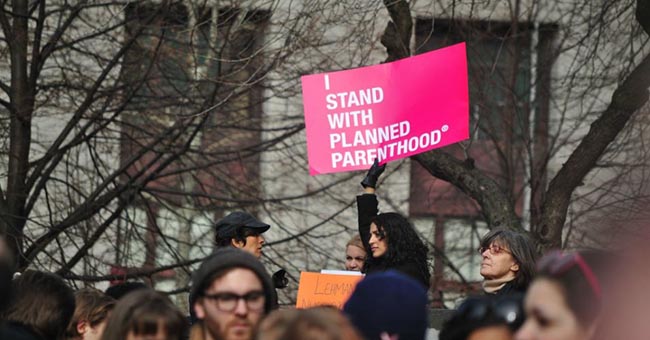 Parenthood South Atlantic (PPSAT) announced the opening of a new health center in the Cherry neighborhood this week. At more than 10,600 square feet, the new facility will double the size of the health center that currently operates on Albemarle Road.

The move was funded by a three-year fundraising campaign led by business leaders Jill Dinwiddie, Crandall Bowles and Linda Hudson. The campaign has currently raised $8.5 million of its $10-million goal, according to a release.

The new health center is important because given growth in Charlotte, we badly need expanded health care in a more accessible area for the population we serve,” Bowles, a PPSAT co-chair, wrote in a press release. “Many of our patients can’t get comparable care elsewhere. This new, larger facility demonstrates how much support there is for Planned Parenthood despite the current opposition across the country and in Charlotte.”

Business leaders in Charlotte made strides toward meeting the city’s affordable housing goals with large donations this week. On Tuesday, Atrium Health and Fifth Third Bank each pledged $10 million to go toward affordable housing, including a combined $13 million to the Charlotte Housing Opportunity Fund, launched in 2018 by the Foundation for the Carolinas. Tuesday’s donations bring the fund to $44 million, nearing its $50-million goal.

Also on Tuesday, Brooks Sandwich House owners Scott and David Brooks announced they will be donating three acres in east Charlotte for Habitat for Humanity to build 18 to 24 affordable townhomes on. It’s estimated that the ity needs 34,000 more affordable housing units to meet demand.

Carolina Panthers owner David Tepper attended a ceremonial signing of a $115-million incentives bill that will clear the way for the Panthers to build a new training and practice facility in the South Carolina town. A slew of South Carolina politicians were on hand to welcome Tepper, who pointed out the potential economic upside for the town just over the Carolina border.

“We’re going to build a world-class facility,” Tepper said in a Panthers release. “This is going to be a showcase that will bring people down to this region.”

South Carolina Governor Henry McMaster hosted the ceremonial signing of the bill — originally signed on May 22 — which will exempt the Panthers from paying state income taxes for players, coaches and employees for 15 years, as long as the money saved is used to build the facility.

The Panthers currently practice at a facility near Uptown Charlotte and hold training camp in Spartanburg, South Carolina. Details of the new facility are not yet finalized. Tepper said on Wednesday that the Panthers will host a fan fest event in Spartanburg.

Two homicides occurred in Charlotte this week, brining the 2019 total to 54. On June 3, three days before his 51st birthday, Ismael Doumbia was shot and killed during an attempted robbery at the Shell gas station where he worked on Freedom Drive. Charlotte-Mecklenburg Police Department released video of the robbery, hoping that someone will recognize Doumbia’s killer. The FBI is helping with the investigation, and along with CMPD, has offered up a total award of $15,000 for information leading to an arrest. Detectives ask that anyone with information about the murder call 704-334-1600.

At around 5:43 a.m. on Wednesday morning, police responded to a home on Ohaus Court in northwest Charlotte after an unknown suspect shot into the home, killing 16-year-old Jayvon Goolsby. Goolsby’s family has started a GoFundMe campaign to help lay him to rest and relocate from the home, where they know longer feel safe.

“Anybody who knew Jayvon knew he was a big ball of fun,” a family member wrote on the site. “He was always laughing and cracking jokes, making other people laugh.”

A First Float Through Time