While last year’s Talking Walls mural festival brought dozens of local, regional and international muralists together to leave their mark on different spots throughout the city, a new event series will set many of those same local artists against each other in the name of raising funds for Talking Walls 2019.

Alex DeLarge and the Southern Tiger Collective will launch Battle Walls, a five-round competitive art tournament, at Mint Museum Randolph in south Charlotte on Saturday. The first four rounds will each feature four artists competing by live-painting on 8-by-8-foot panels, with those in attendance voting with their dollars for their favorites. Attendees will buy raffle tickets worth $1 each, and decide which artist each dollar counts toward as a vote. The winner of each round will move on to the final round on July 20.

DeLarge was inspired by a similar competition he participated in in his hometown of Pittsburgh, Pennsylvania, called Art Battle.

“Art Battle was on a slightly smaller scale and it was a tournament setup but it was over a longer period of time, so I thought it would be more exciting if we condensed it and kept the buzz going,” DeLarge said. “And because all we do is street art and all I know is street artists who go big, we decided to go much larger in scale. We’re building the cube, which we’ve done the live-painting cube a bunch of times in a bunch of different places, but it was always a 4-by-4, smaller thing. So we’re going 8-feet-by-8-feet wide, which is awesome.”

DeLarge has brought on an unlikely partner for Art Battles in Hannah Crowell. As exhibition designer at Mint Museum, not only does Crowell’s job not often involve event planning, but the museum itself is not exactly known for its relationship with the street art scene.

DeLarge ran into Crowell a couple months ago during a break from painting a mural at the soon-to-open Q.C. Pour House in South End. He pitched her the idea and Crowell thought it would be a great fit for New Pathways, an organization involving Mint and nine other cultural institutions that will help them develop innovative programming and adapt to the changing arts scene.

“This is a huge part of what the Mint needs to be doing, the way we need to be available to our community, and that is for an event like this, but that’s also just for people to experience art in different ways,” Crowell said.

Saturday’s kickoff will align with the opening of Mint Randolph’s newest exhibition, Never Abandon Imagination: The Fantastical Art of Tony DiTerlizzi. DiTerlizzi is widely recognized as one of this generation’s leading authors and illustrators of books for children and young adults, and the exhibition — the most extensive look at the art of book illustration the Mint Museum has ever done — will feature more than 150 of his original works.

Not only will the exhibit be free to the public during Battle Walls on Saturday, but DiTerlizzi will be on hand to discuss his art with those who attend.

“We’ve put this all together as this sort of epic day to experience art at multiple levels — live or even just engaging with an artist,” Crowell said. “I’m expecting a lot of people that will be experiencing the Mint, or at least Mint Randolph, for the first time through this event … I think it’s a really cool opportunity to create a really great event that’s supporting Charlotte artists at a place that was the beginning of the art museum in North Carolina.”

Mint Museum Randolph, which opened in 1936, is considered to be the first art museum in North Carolina history.

After Saturday’s event, Battle Walls will continue with first-round competitions at Heist Brewery & Barrel Arts on Saturday, June 29; The Collective apartment complex in Villa Heights on Saturday, July 6; and Camp North End on Friday, July 12. While the final round has not yet been — ahem — finalized, Crowell and DeLarge hope to host it at Mint’s Uptown location on Saturday, July 20.

Saturday’s event will include games in the yard of Mint Museum Randolph, tunes from DJ AHUF, beer from Heist Brewery and snacks from Chimi Spot and Scratch Kitchen. 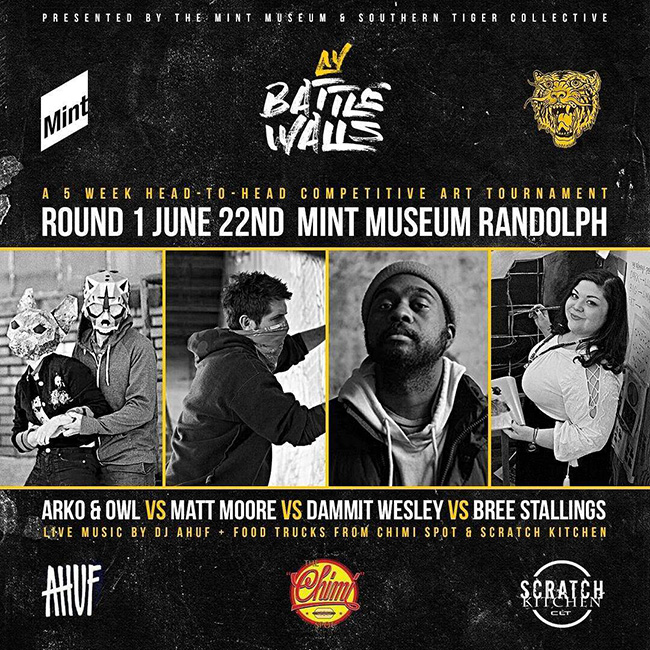 Savage Love: Why Not Me?

Yoshi Mejia Spills About her Experience as a Charlotte Bartender