When the Collegiate International Athletic Association (CIAA) basketball tournament and all the events that come along with it march into Charlotte on Feb. 25, it will be a bittersweet occasion for those who have celebrated the annual week of hoops, parties and performances in the Queen City since it first arrived in 2006.

That’s because as the CIAA tournament celebrates its 75th year, 2020 also marks the last year of the tournament being held in Charlotte, at least for the foreseeable future. Next year, CIAA moves north to Baltimore.

It’s an inarguably big loss for Charlotte financially, as the annual economic impact of the tournament hovers around $50 million, according to the Charlotte Regional Visitors’ Authority.

Culturally, however, it may be an even bigger loss. As most Charlotteans know, the CIAA is made up of Historically Black Colleges and Universities, and each year, the tournament served as the epicenter for — if not a distraction from — countless parties featuring big names in rap and R&B, with HBCU alumni flying in from all over the country to be a part of the fun.

Can anything fill that void? Economically, there’s nothing on the horizon. The recent announcement of the Big South Conference basketball tournament arriving in Charlotte next year won’t have nearly the impact that the CIAA had. Culturally, however, some local organizers have already been working on that exact thing.

The events will all take place at either Duke Energy Theater in Uptown or Camp North End in the Druid Hills area.

“This was a thought in a living room about how we can put our people on,” says Fant. “We always celebrate what comes into Charlotte, but we never celebrate what is already here,” said Fant.

The TOBWE kickoff party is scheduled for Friday, Feb. 28, and will feature a 90-minute performance incorporating music, art and social justice, followed by a mix-and-mingle networking event with local artists like Jason Woodberry, Marcus Kiser and Quentin Talley.

The roots of social impact are deep in the ethos of TOBWE. According to Glover, it’s the entire foundation on which the event series was built.

“We are celebrating our entire Blackness. Because yes, Black is a culture,” said Glover. “We can get together and celebrate the things that make our culture what it is in a way that is celebratory and that recognizes our local lived experiences, as well.”

Fant continues: “Taking it a step further, when you say Blackness, it is in alignment with the African-American descendants of slaves because we have a unique experience as Black Americans that I think, culturally, when you say certain things, it means something. Like when you say ‘red Kool- Aid’ that means something within the Black culture here in America. So just really putting it on [the] level saying there is a uniquely Black American experience that needs to be celebrated like every other cultural experience that happens.”

This celebration of Blackness does not come at the exclusion of non-Black attendees that want to participate in TOBWE, Fant explains.

She says sometimes you have to be out among the people that you don’t understand in order to get a better understanding and build better relationships. That is the opportunity TOBWE affords to other demographics in Charlotte.

“I go to the Greek Festival every year,” she says. “I am not Greek by any stretch of the imagination, but I want to learn about the culture, so I go. I go to the Greek church, try the food, go to some of the performances. Same thing with the Puerto Rican Festival. I am definitely not Puerto Rican, but I go to see the performances and support the businesses and just see how they celebrate their culture. White, Puerto Rican, Indian, whatever are welcomed to come to celebrate and participate as we celebrate our Blackness.”

For Fant and Glover, one factor that has caused folks of all races to stay away from the CIAA in recent years is the cost, which is one reason they see TOBWE not only as a potential replacement in years to come, but an alternative option for this year as well.

“What we see that has been the trajectory of CIAA has been a high price point for promoted events and a lot of celebrity events,” Glover says. “CIAA has become a national event, but what we do with Mosaic Live and TOBWE is take these national moments and make it have a local impact and local presence,” explained Glover.

Over the past three years, Fant and Glover have capitalized on culturally significant moments in the Black community to reinvent the locally-driven TOBWE events. The first year was a celebration of local black comic book creators in relation to the release of the Marvel Comics blockbuster hit Black Panther.

“We were like, ‘We are going to get ready to spend our money to go get dressed up to support this Marvel Comics and we have Black artists here in Charlotte who have done comic books. How do we celebrate them along with celebrating what Black Panther means as well?’” recalls Fant. “This is where The Official Blackest Weekend was birthed.”

The Black Panther event grew to numbers Fant and Glover didn’t expect, and helped to shape what TOBWE would become.

The pair originally only planned to host two movie screenings in two theaters that held 70 people apiece. If they could actually reach 140 people, they would have been happy, they agree. By the last two weeks of December 2017, the event had gone viral. The 200 Facebook event invites they sent out somehow reached up to half a million people by January 2018.

Just like that, TOBWE grew beyond the pair’s imagination, Fant says.

Having that many people interested prompted Fant and Glover to add events that would introduce visitors to Charlotte in a major way. They added a “Welcome to Charlotte” event and a vendor expo, then hosted the Sunday brunch that would become a staple of TOBWE.

In its second year, TOBWE was scheduled for NBA All-Star Weekend in Charlotte and was targeted at a different demographic. Surprisingly, the Black Panther weekend had drawn mostly folks of an older demographic, which was fine, Fant says, but in 2019 she and Glover adapted.

“We put a focus on our young people,” Fant says. “That was the element that was missing. We had the adults and we had the community organizers, but we realized we did not have young people included in the process.”

They worked with Mecklenburg County Park & Recreation to host a basketball tournament, including free-throw and three-point shootouts complete with trophies. They then wrapped with the Sunday brunch, at which participants could unwind while discussing social issues.

This year, the focus will be on the Black college experience at both HBCUs and predominantly white institutions. There will also be a conversation about how to get the older and younger generation to work together to solve issues, with a focus on events and activities that appeal to both.

The Intergalactic Soul art and performance showcase on Friday should pull in the adults while the Mom I Don’t Want to Go to College Career Expo will target young people.

“It is a skill and trade expo,” Fant explains. “Within that, we will be hosting the basketball competition. So giving pathways to careers for 16- to 24-year-olds and still keeping the entertainment component with basketball, DJs, musical performances at Camp North End. If everything aligns there will also be a spades tournament and cookout.”

And just like that, saying goodbye to the CIAA became that much easier. 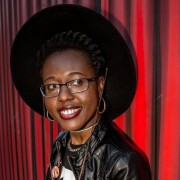