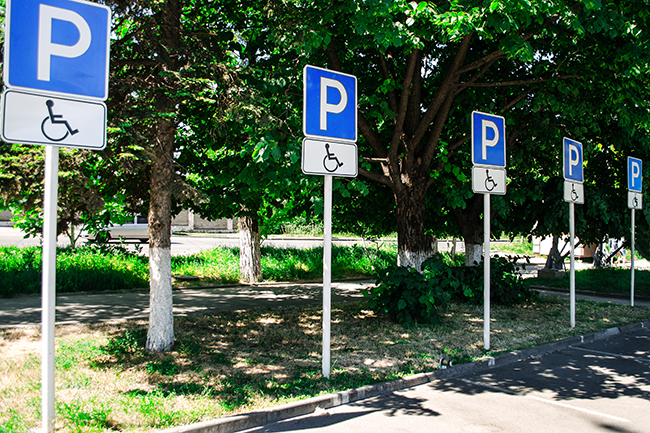 HEAR NO EVIL Police responded to the Crest on Providence Apartments in south Charlotte after an ongoing argument between neighbors over a parking spot came to a head. According to the report, apartment staff called police after an able-bodied resident removed the handicap sign from a parking spot and placed it on their porch. The suspect told police that they removed the sign because a neighbor who always uses the spot only has an auditory disability and the suspect didn’t think the person should get preferred parking due to deafness.

CAUGHT RED-HANDED Police got a two-for-one deal for shoplifters at Target at the Metropolitan in Uptown recently. Officers responded to the store in response to a shoplifting call after a man grabbed up to $44 worth of speaker technology, $43 worth of Dragonball Z toys and a $13 Camelbak bottle and tried to leave the store without paying. While officers were there dealing with that thief, they became aware of another larceny in progress, in which a separate suspect was trying to steal two PlayStation 4 games. Another Target in Steele Creek was … well … targeted for another type of crime on a recent morning. Officers responded to the store on Walker Branch Drive in southwest Charlotte after staff reported that for a whole-ass 30 minutes between 9:45 and 10:15 a.m. a man was walking around the store masturbating.

CLEANED OUT A 34-year-old University City man had to make an embarrassing admission to police when he reported a recent attempted robbery. The man told officers that he hired an escort through a website and the woman tried to rob him of his possessions. He told officers he caught her trying to run away with his stuff at 11 a.m. but was able to catch her and get his shit back. In an unrelated incident, a 38-year-old man living in the Sedgewood neighborhood reported that an unknown suspect stole some valuables from his home at some point during the span of a week. Among the items stolen: $5,700 in cash, a $16,000 Rolex watch and eight gold coins worth $500 each.

FIRE FIGHTING Police weren’t the first responders to a scene in the Fourth Ward in Uptown on a recent afternoon, but perhaps they should have been. CMPD and CFD responded to a call about someone burning things behind a Dunkin’ Donuts on North Graham Street, and when the fire department reached the lot first, they found the suspect, who immediately began trying to assault them. Officers arrived and arrested the suspect before anybody was injured.

IF ONLY I HAD A GUN A 61-year-old man must be regretting his decision about which moving company he used to move items between his Aiken, South Carolina, home and his storage unit on South Tryon Street. The man reported that the suspect stole four guns — a 9-millimeter handgun, a 12-gauge shotgun, an AR-15 and a .22 caliber pistol — and $1,500 worth of ammunition while helping him move.

MIDDLE SCHOOL HIGH Police responded to Albemarle Road Middle School in east Charlotte on a recent afternoon after finding that one student’s lunchtime snack wasn’t fit for in-class consumption. School staff seized “one edible marijuna muffin” from the kid, and police later seized a stun gun from him as well.

THIS SHIT IS BANANAS Police responded to a 7-Eleven on Eastway Drive in east Charlotte after a suspect went crazy in the store, assaulting a man, threatening a woman and damaging property. According to a 37-year-old man who was in the store at the time, the suspect came in and struck him with an object, then threatened the woman. He then attacked the cash register, doing $1,000 in damage, then grabbed $20 worth of donuts and $20 worth of bananas and left the store.

TAKE THE CANNOLI A local realtor was alarmed recently when he visited one of his properties in the Shamrock neighborhood and found a loaded revolver sitting on the front porch. The man called police, suspecting that there was a break-in, but officers responded and found that there was, in fact, no break-in. As it turned out, the owner of the gun came forward as a 30-year-old man who lived nearby and “advised that he left the firearm at the residence after attempting to walk home the previous night,” though it does not go on to explain how that makes any sense.

All Scanner entries are pulled from CMPD reports. Suspects are innocent until proven guilty.

Audrey Baran Dances Around the Questions

Reason|Define Is Hard Rock with a Bright Future