When I reviewed Time Sawyer’s great album Disguise the Limit five years ago, my then-editor had some constructive criticism for the North Carolina-based folk band: “Great band but they’ve got to lose that name.” I countered that the alt-folk rock combo’s punning moniker is actually quite clever.

The “Sawyer” part linked to an all-American literary icon as filtered through the Elkin band’s rustic Yadkin Valley roots, while “Time” juxtaposed maturity with the group’s youthful optimism, I explained. They were a young band with an old soul.

Today, Time Sawyer — guitarist and vocalist Sam Tayloe, banjo player Houston Norris, lead guitarist Luke Mears, bassist Court Wynter and drummer Jordan Nelson — are not quite so young. Frontman and co-founder Tayloe celebrated his 29th birthday yesterday with a night off from the band’s current tour which takes them to the Neighborhood Theatre on Feb. 22. But as a songwriter, Tayloe still retains a gently humanist outlook that brings the grit of daily life to Time Sawyer’s country crossroads encounter of bluegrass, rock and scalpel-sharp observation. He’s heard the Rush comment so frequently that he greets it now with a good natured laugh.

“People used to say, ‘I thought you were a Rush cover band,’ and that’s where it ended,” Tayloe says. “Now they say ‘I’m glad I stuck around. You guys are awesome,’” he continues. “It’s a good place to be.”

I had the chance to catch up with Tayloe to discuss Time Sawyer’s upcoming album, the band’s devoted fans on tour and the festival they launched, which is still going strong.

Queen City Nerve: The band started in 2010. Are you and Houston the only remaining original members?

Sam Tayloe: Yes. The original lineup was Houston [ on banjo and vocals], me and two other musicians [guitarist Kurt Layell and drummer Clay Stirewalt]. A few years ago, Houston and I decided to take a different direction. We played for eight months as a duo and then had some other folks sit in. Luke Mears, our current guitar player was filling in early on. He’s from Elkin as well, so it was an easy partnership to have.

We met our rhythm section [Jordan Nelson and Court Wynter] in Winston-Salem. It’s really been a blessing. They’re a great group of amazingly talented guys, but I cherish our cohesion most of all. We’re great buddies and we all care about what we do. I think that shows.

You’ve released six studio albums since 2011. Are you working on a seventh?

Sometime in the middle of this year we’ll have the new record out. We’re really excited about it. We went back to Echo Mountain Recording in Asheville for this one, like we did for 2017’s Wildest Dreams. As I’m sure everyone says, I think it’s our best work yet. I feel really good about it.

Will producer Mike Ashworth of Steep Canyon Rangers be back for the new album?

No, we did the album with the folks at Echo Mountain. Jim Georgeson who is the great musical mind there does a lot of lead work. We hit it off with Jim last time around. We met a lot of times during the last year and a half bouncing ideas off of each other. We had a look at some of our tunes and saw where the material steers itself in a way. I think people dig too hard sometimes trying to make a song sound a certain way. Instead, we had a lot of fun letting a song lead itself. [When we do that] it’s usually our best work. Jim’s guidance this time around brought us around to letting the song speak for itself. Then we highlight that with whatever instrumentation the song calls for.

What’s the biggest change in your music since the band started out?

We’ve gained the ability to look at a song and know whether it’s done yet. Instead of keeping this thing tethered to what it is at the moment, we’re molding it into shape more than we used to. We’re giving it a little more loving care. I think that gives us a better feel for connecting with the material and our audiences. We’re spending a lot of time as a group, playing a bunch of shows and fine tuning and tightening our music. 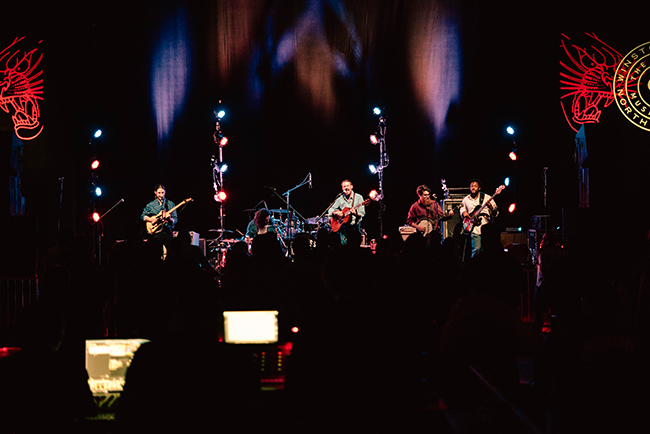 Speaking of audiences, what’s it like to have such a devoted fan base?

The devotion of our fan base has become part of our bio now. The people we see at shows now are our friends just as much as fans of our music. There’s a community feel to what we do, and it’s growing. We’re playing more new cities and states. It’s a great feeling to have people coming to your shows and devoting themselves to what you’re doing. We don’t take it for granted. We try to put time in before and after shows to stay in contact with these folks because they’ve become friends.

Nine years ago, you launched the Reevestock Music Festival. The original idea was to help revitalize downtown Elkin and to reopen the historic Reeves Theater. Has the goal expanded?

Yes. The original Reeves Theater has been open for years, so we’ll chalk it up as a win for the festival. A family in town purchased the theater a couple years ago, so we had to pivot a bit with the festival. I wanted it to stay a benefit, something that’s giving back with a community. So we’ve been operating as a paid scholarship for local area high schools. Right now we give out to three different schools in our area including Elkin High School, where I went to high school along with Houston and Luke. The plan to give continues to expand. We’re trying to add more scholarships to more schools.

Time Sawyer has played on the festival bill every year. We usually keep ourselves low key. We’re not trying to headline the thing. I’m always trying to bring in talented performers. Last year, Eric Krasno headlined and his band was phenomenal. We’re continuing to grow, and we’ll keep bringing good music to the festival.

In the meantime, you’ve been touring a lot lately.

Yes. Prior to this year we hadn’t spent a lot of time in Florida and we just had our first real tour down there. We had a couple of sellout shows. I feel like we’re riding a high coming into the Neighborhood [Theatre] and that’s the best feeling to have. We love the show at Neighborhood. It’s probably my favorite show of the year.

VisArt Diaries: On the Road