Everyone thinks their dog is the best dog.

However true that may be, two dogs in Charlotte have gained some attention both in the city and across the country for their unique backstories and fluffy faces.

Some may already know the stories of Larry the Junkyard Husky and Charlie the Dalmatian, as their Instagram fame has transferred to real life. But we heard it straight from the horse’s — or dog’s — mouth when we sat down with Larry, Charlie and their owners to talk about how these larger-than-life pups became sweetheart canines of Charlotte.

Every time Haley Williams walked the Light Rail Trail in South End last summer, she would always see a big, fluffy husky lying under a broken-down truck in a junkyard.

She wasn’t the only one that noticed Larry. Many others in the apartment complexes around the junkyard noticed the panting canine watching passersby walk the trail. Some even gave him treats and cheeseburgers, since Larry was always willing to accept food.

Williams approached the owner of the junkyard and asked if she could buy the husky off of him. He denied the offer, and Williams came up with a compromise.

“So I’m just like, ‘Listen, huskies have a lot of energy, this is what I know about them,’” Williams recalled. ‘“Can I take him for walks?’”

The owner agreed under the condition that she get a harness and leash for the dog, and Williams walked Larry on her lunch break three times a week. By August 2018, after three months of walking him, the owner realized that Larry was better off with Williams and he handed him over to her. By then, though, his condition wasn’t great.

“We got him and he was covered in mats and didn’t know how to use the stairs, never been in a car before,” Williams said. “So it was a learning curve.”

But with a little tender love and care from Williams, Larry is now happy and healthy, following his new owner around wherever she goes. His time in the junkyard never hurt his spirit, and Williams started an Instagram account for him to catalog his adventurous life.

“I couldn’t ask for a better dog. He truly can go everywhere with us and just fits right in. He goes camping with us and hiking with us,” Williams said. “At this point, he wants to be an inside dog. He would rather be inside than outside. But he’ll do anything. He just wants to be with people.”

Larry might only have attracted a little more than 200 followers to his Instagram account, but spend some time with him in South End and you’ll see that he’s famous in real life. As I hung out with Williams and Larry one early evening at Olde Mecklenburg Brewery, multiple people recognized the husky as soon as they saw him strut by. One passerby even exclaimed, “Larry! I follow you on Instagram!”

An Olde Meck employee told me that Larry doesn’t have any enemies in the city, he’s just that friendly.

“People know him more,” Williams laughed. “I always joke that people don’t know my name but they know Larry’s name.”

When Charles Oliver was born, he was the only Dalmatian pup in his litter that came out with a long coat.

It’s a recessive gene, so both parents have to carry it, but Charlie’s parents were both short-coat Dalmatians. When the breeder asked Haleigh Morgan if she wanted a short-coat or a long-coat Dalmatian from the litter, Morgan almost didn’t believe there could be an option.

But after a six-hour drive to Virginia and another six hours home, she returned to Charlotte with the first dog she’d ever had.

Once Charlie’s spots started to develop, it became clear that Charlie was destined for viral fame. One of his eyes is covered with an unmistakable heart-shaped spot, and pics of Charlie began gaining internet notoriety.

Some Reddit users didn’t believe his spots were real.

“Somebody put him on Reddit, like a picture from his Instagram, and there was all these comments on it saying that his heart eye was fake and I drew it on with eyeliner,” Morgan said. “I started to [defend him]. But you can’t, the internet trolls, you can’t tell people now. I think that’s where it kind of started.”

Now with more than 82,000 followers on Instagram, there’s still doubt about his parentage. Morgan usually fields questions about his breed with a quick response: “Look it up!” 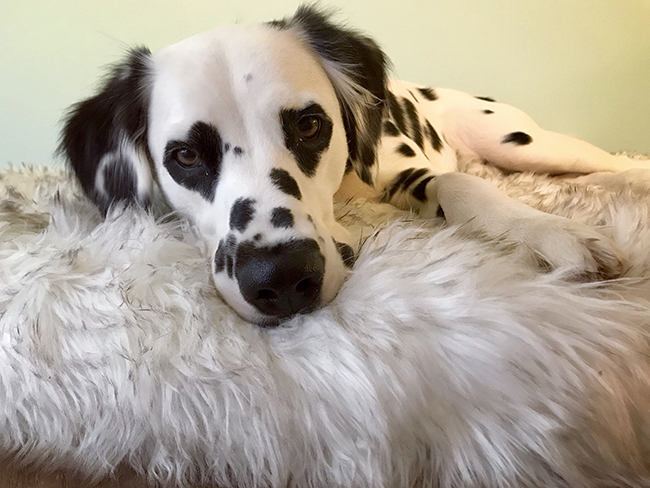 If you search for “heart eyes Dalmatian” on Google, you’ll find an endless stream of news bytes from publications recycling the same pictures of Charlie. The internet fame has even landed him a few paid jobs with companies.

A recent one with Valspar Paint goes up in July and features Charlie side-by-side with a bedroom painted to match his spots. The money will go back to Charlie’s care.

“[The money is for] his vet bills, his food, because he’s got some serious food allergies. He has to be on prescription food,” Morgan said. “So he’s paying for his own way.”

Just a little over 2 years old, Charlie has seemingly boundless energy. It’s a perfect fit for Morgan, the school teacher with an active lifestyle.

“It’s a lot to handle,” Morgan said as Charlie jumped on her for attention. “I mean, I thought when he’d turn 2 he’d chill out a little bit, but he’s still crazy.”

Thinking about getting a Dalmatian because Charlie is so beautiful? Morgan said she couldn’t imagine life without Charlie, but warns potential owners to look into the kind of commitment they’re making. Dalmatians carry high risk of struggling with minor issues like hypothyroidism, allergies, iris sphincter dysplasia and seizures, not to mention bigger issues like deafness and urinary stones.

“A lot of people ask me about getting a Dalmatian and I tell them to do your research because I didn’t,” she said. “But I love him to death. He’s helped me meet a lot of friends; almost all of my friends I met at the dog park and at the dog bar. He’s definitely made a big impact in my life, I’m so happy I got him. I don’t know where I’d be without a dog now.”

On the Seventh Year Since the Death of my Daughter