On Thursday afternoon, the City Of Charlotte and design partners for the planned Rail Trail Bridge hosted a public unveiling of two finalized designs for the project at Charlotte Powerhouse Studio in South End. Designers presented renderings of the pedestrian-and-bicycle bridge, which will span over I-277 to connect South End’s Rail Trail to Uptown, for the first time and the public was asked for input on its aesthetic and function.
Designers unveiled two similar designs, one with a single-arching feature and one with a double-arching feature (images below). Both designs include a gentle s-shaped bridge when viewed from overhead, which was designed to guide the eye of pedestrians and cyclists crossing the bridge toward picturesque views of the skyline.
Both designs also include a webbed steel netting element that will be lit by color changing LED’s at night similar to those already installed on various buildings such as the Duke Energy Center that make up the Charlotte skyline. The pattern within the netting is also intended to cast a honeycomb-like shadow onto I-277 during the day, alluding visually to the Hornets’ Nest symbolism that is part of Charlotte’s history.
The city is seeking public input not only at public forums like the one held on Thursday, but also through a survey on its website. The feedback will help guide which design is finalized, as well as ensure the new infrastructure works efficiently with existing pedestrian, auto and light rail structures nearby. 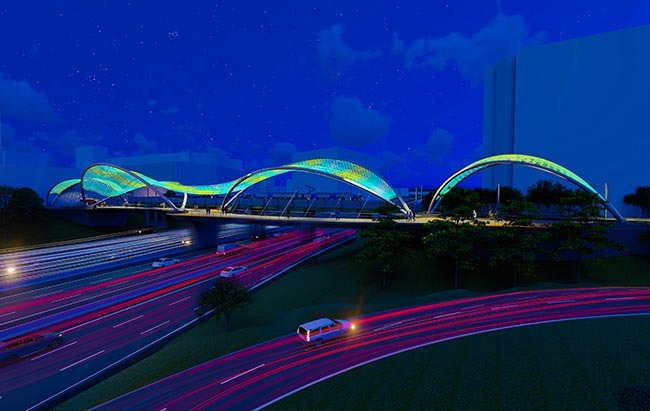 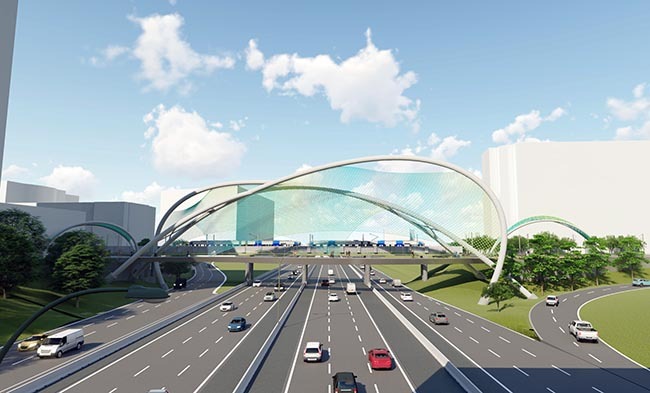 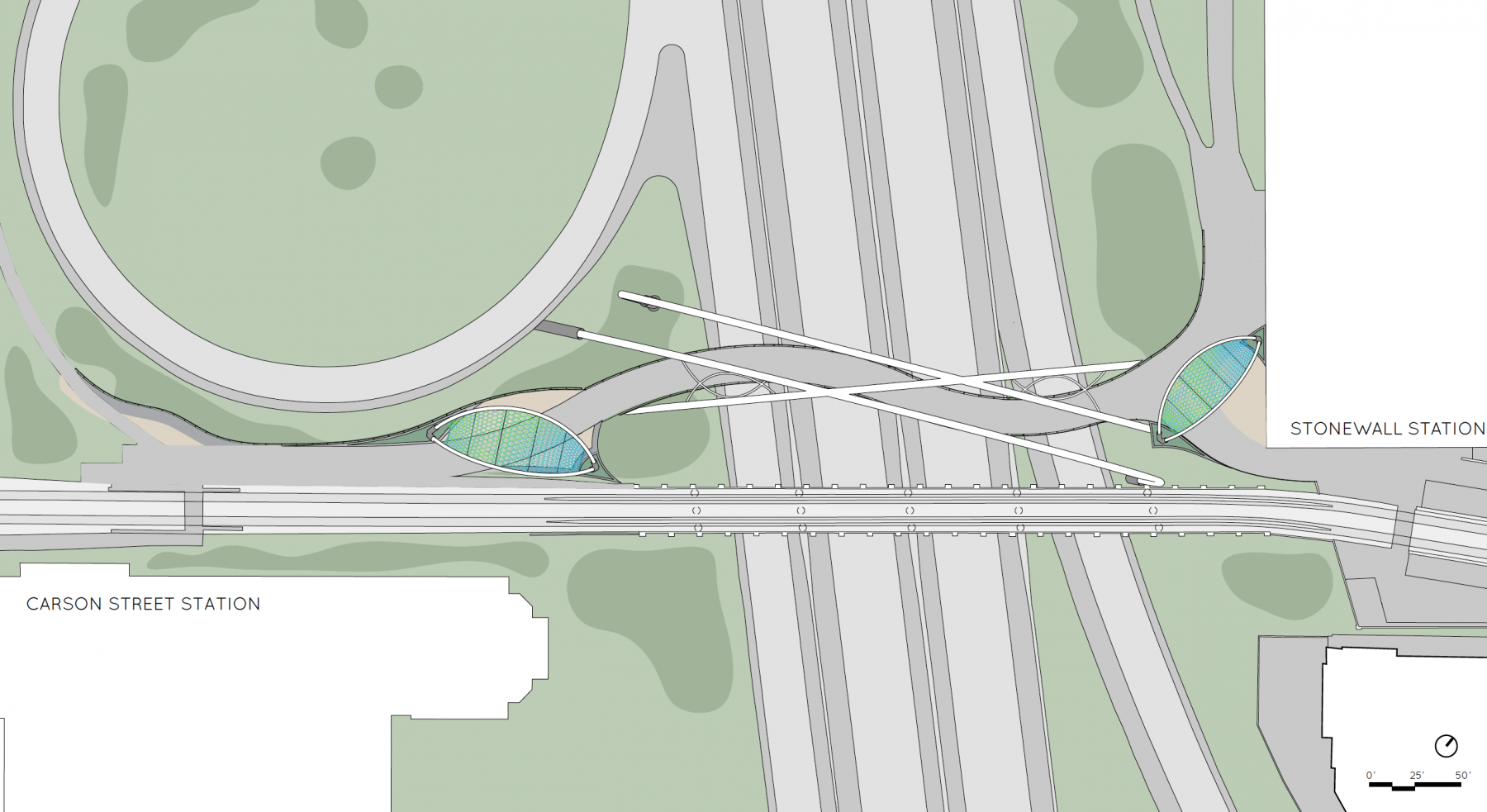 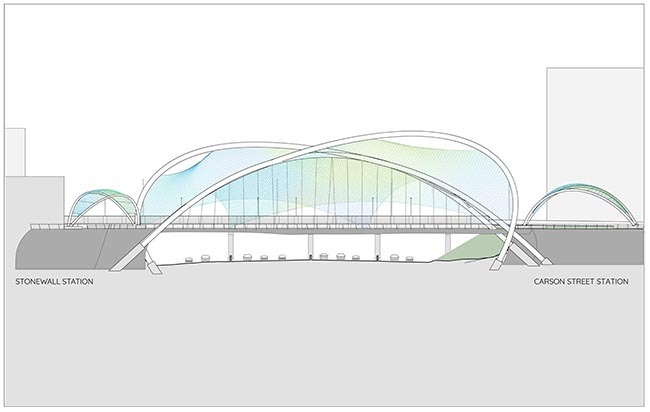 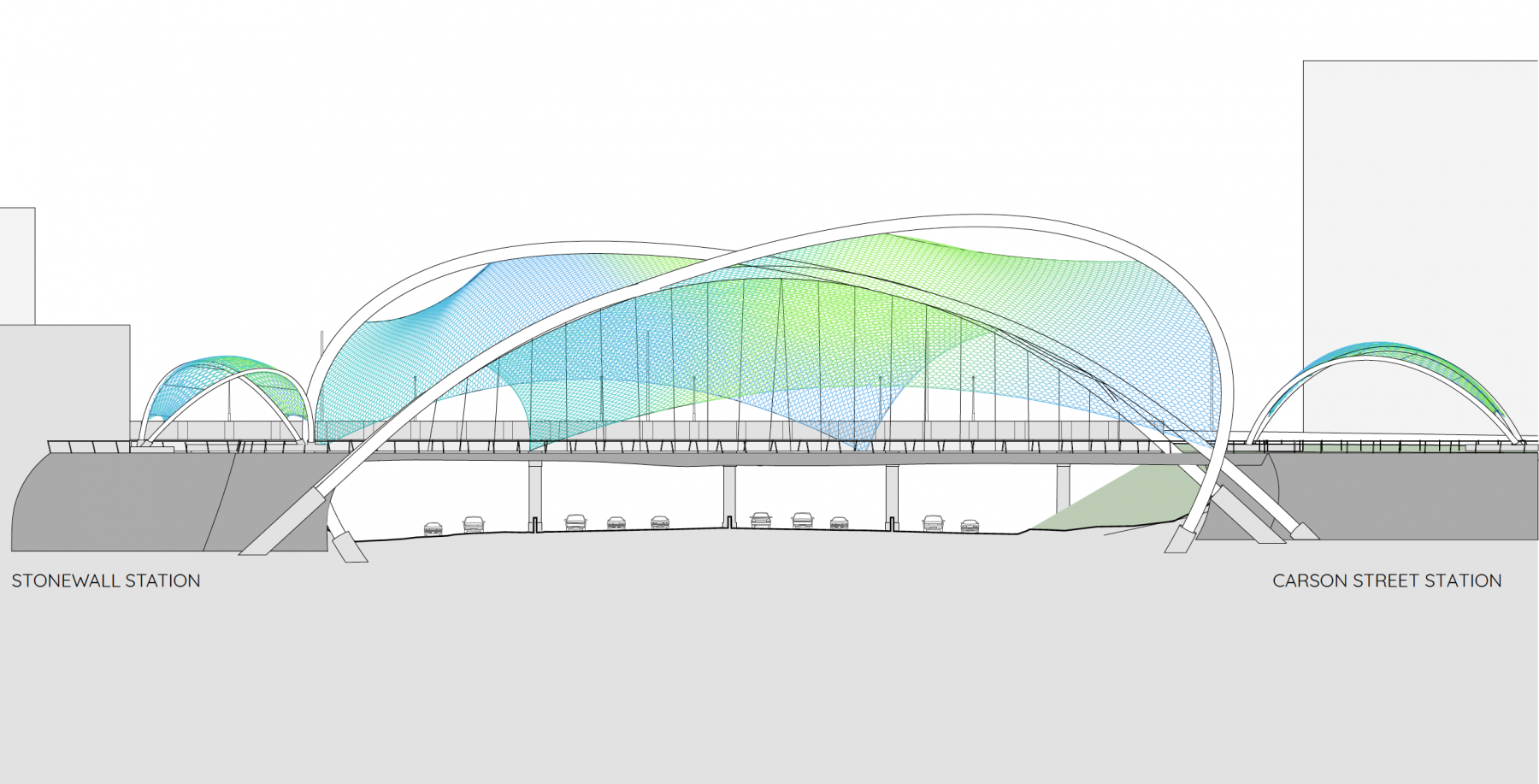 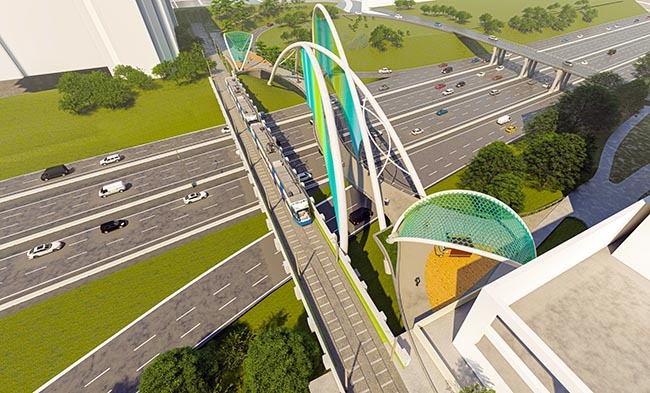 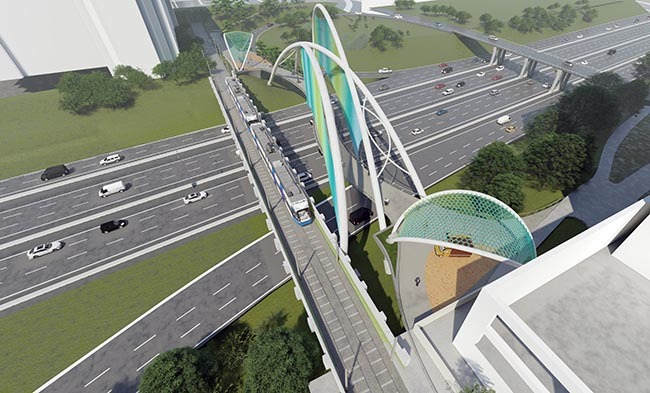 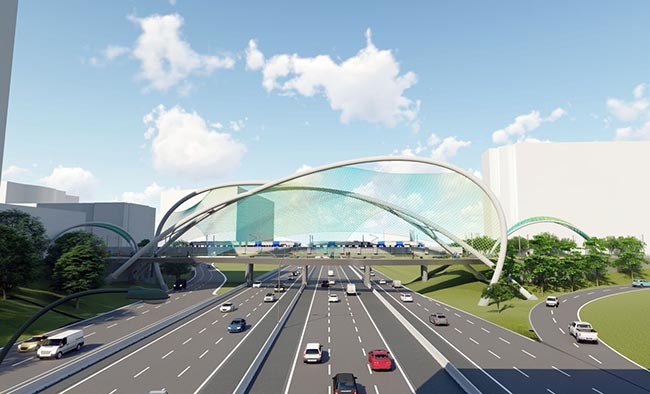 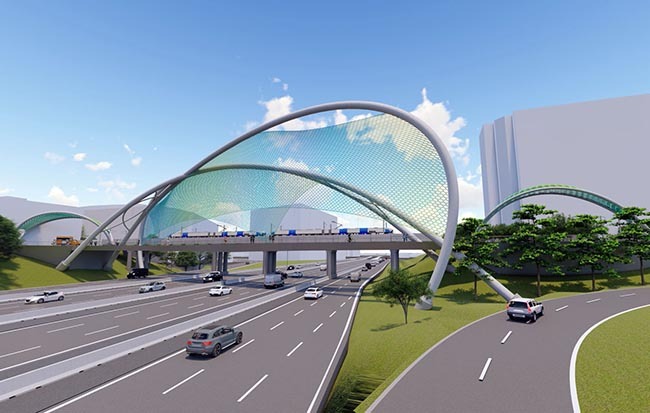 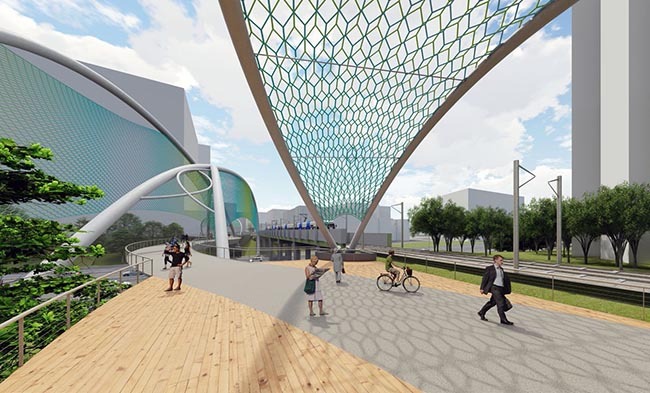 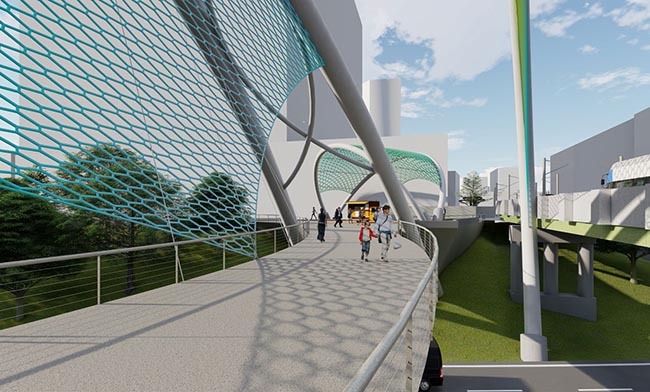 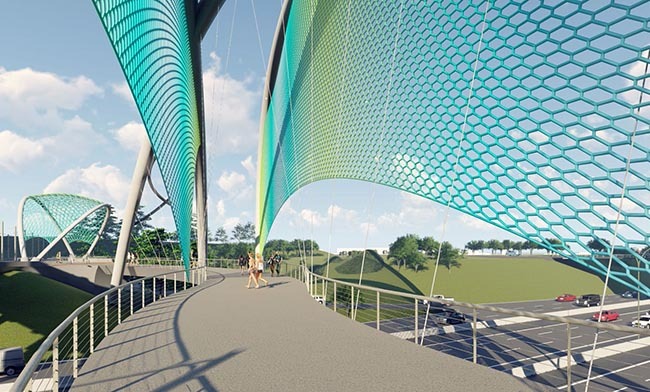 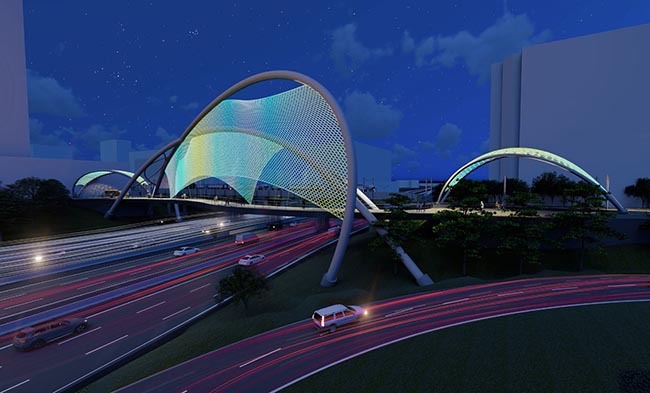 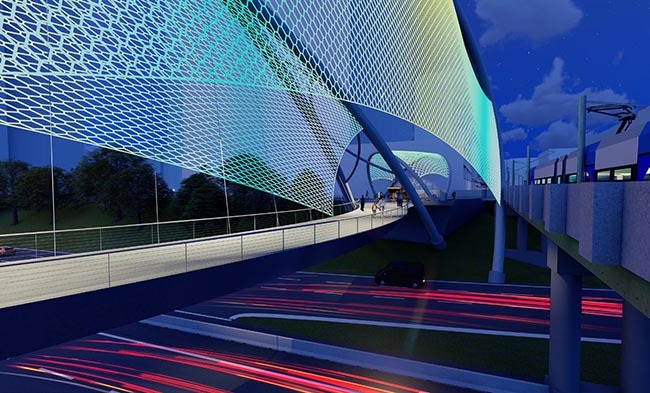 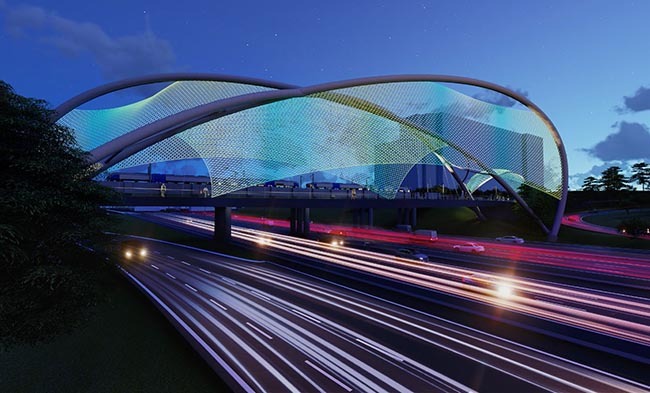 The Charlotte Housing Authority (CHA), the city’s largest affordable housing nonprofit, unveiled a new name on Monday, announcing that it will be known as INLIVIAN, in part because of a stigma that had tainted the words “housing” and “authority” in the eyes of many, according to a press release.
In addition to the new name, the organization also unveiled a new logo, website and social media pages.
“This is an extremely exciting time for our organization. We were founded to serve after the Great Depression. In the 80 years since, we have evolved and now provide housing solutions to help address Charlotte’s diverse housing challenges and improve the quality of the life of the residents we serve,” said INLIVIAN CEO A. Fulton Meachem Jr. in the release. “Our new name, INLIVIAN, better reflects the agency we are today. After listening to valuable feedback about our name, coupled with the changing funding landscape for housing authorities, it was confirmed that it was time to update our brand and change the way we represent ourselves.”
According to the release, the rebranding process took more than a year and included extensive research such as focus groups and in-depth interviews with residents, community leaders, elected officials and employees. The feedback confirmed that the words “housing” and “authority” have a great deal of stigma and negative connotations associated with them.
“This association ignites undeserved negative stereotypes about our residents and communities,” the release stated.
The new name was inspired by the word “enliven.”
“INLIVIAN’s vision is to empower families and individuals to live more stable lives by delivering diverse price point housing for those priced out of the market, including teachers, nurses, custodians, veterans, seniors and the disabled,” the release stated.
The release stated that INLIVIAN will continue CHA’s mission to house residents who make 30% or less of the area median income, or $25,750 per year for a family of four. Today, the agency provides housing and support to over 10,000 households in Charlotte and Mecklenburg County, with a wait list nearly double that size.

Speaking of wait lists, Mecklenburg County announced on Wednesday that it had cleared a wait list developed in July for child care subsidies thanks to a partnership with Child Care Resources Inc. (CCRI).
As of October 31, more than 1,100 previously unserved children up to 5 years old were deemed eligible for child care subsidies through the county’s Waitlist Reduction Initiative, launched last year to provide additional funding for child care subsidies to low-income working families when state or federal funding is not available.
According to the county, more than 91% of the children served were enrolled in four- or five-star licensed child care programs. Research showed that the families of enrolled children are expected to earn $42,858,321 annually now that they have secure and quality child care arrangements in place. Families receiving subsidies are made to pay 10% of their income to offset the cost of child care.
In June, the Mecklenburg Board of County Commissioners approved $20 million to go toward county-funded child care subsidies to reduce the number of children on the county’s child care subsidy wait list. Following the adoption of the budget on July 1, CCRI invited 1,954 families from the wait list to apply for funding through the county’s allocation.
After determining eligibility, the county enrolled 1,134 previously unserved children ranging from newborn to 5 years old. To date, a total of 1,688 children are being provided child-care subsidies with county funding, a 191% increase from June 30. Additionally, the families of 803 children that have been newly placed on CCRI’s subsidy wait list have been invited to apply for funding with intake sessions currently taking place from now until the end of December.
“This is a huge accomplishment for the county and one that we’ve spent more than three years trying to achieve,” county manager Dena Diorio stated in a press release. “It pleases me to know that these families now have access to high-quality child care.”

Charlotte-Mecklenburg Police Department’s Animal Care & Control division announced this week that they have started their annual holiday special, in which residents can adopt a dog or cat for free, early this year. The special is in effect now through the end of the year.

According to CMPD, the fees usually stand around $100 or more. While the special is in effect, residents need only to make a monetary donation of the amount they choose. The department has begun the special early because the shelter is full and the pets may face euthanization.
All pets up for adoption are spayed or neutered and up to date on all vaccinations. The shelter, located at 8315 Byrum Drive, is open on weekdays from 11 a.m. to 7 p.m. and weekends from 11 a.m. to 5 p.m., though staff asks that potential adopters arrive 30 minutes before closing. To browse through adoptable pets, visit the AC&C website.
[Editor’s Note: Do it.]

A 27-year-old woman was shot and killed at a party early on Sunday morning this week, bringing the total number of homicides in Charlotte to 97. The shooting happened at a party in a business complex on Reagan Drive near the Sugar Creek Road/I-85 interchange.

According to the report, 911 dispatch received a call about people communicating threats at the party just after 1 a.m. on Sunday around the same time that officers patrolling nearby heard gunshots. Those officers responded and found Ebony Harrison dead from gunshot wounds.
Detectives detained 21-year-old Corey Vega on the scene and later charged him with Harrison’s murder.
Grant Baldwin contributed writing and reporting to this roundup.

The Newbie Foodie: A Seat at the Dogwood Southern Table