Mecklenburg County District Attorney Spencer Merriweather announced on Friday that his office will ask that the North Carolina State Bureau of Investigations carry out independent investigations of any officer-involved shooting involving the Charlotte-Mecklenburg Police Department that causes serious injury or death.

The change will bring CMPD up to speed with other departments in the county, all of which turn over investigations of officer-involved shootings to the SBI.

“CMPD has conducted professional and extraordinarily thorough investigations of shootings involving the department’s officers, and the District Attorney’s Office has been confident in the integrity of those investigations,” Merriweather stated in a press release. “Nevertheless, just as we counsel our prosecutors and staff against the appearance of a conflict of interest, we must do what we can to ensure we avoid perceived conflict in these investigations whenever possible. The criminal justice system cannot — and should not — function without public confidence.”

According to the release, the new policy will take effect as soon as a protocol is developed that addresses operational concerns such as standard procedures enabling local police to secure the scene until SBI investigators can arrive to assume command of the investigation. When the SBI completes its investigation, the bureau will turn over the investigation to the D.A.’s office to determine whether the evidence supports criminal charges.

Merriweather had been invited to a meeting of Charlotte’s Citizen Review Board set for Tuesday, Aug. 27, to discuss the board’s recommendation that an independent body investigate CMPD officer-involved shootings, but according to Friday’s release, Merriweather had been working on plans to implement the new process for months. He will still attend Tuesday’s meeting to further discuss the process.

City leaders gathered at the Powerhouse Trolley Museum in South End on Wednesday to announce a $1 million investment from Charlotte newcomer U.S. Bank that will help the city construct a long-planned pedestrian bridge that will connect South End and Uptown by going over I-277.

U.S. Bank, which plans to open its first Charlotte branch in the coming years, has committed $1 million to help with the design and construction of the bridge. The bank will also make an additional investment to “animate the Rail Trail” near the bridge with programming, maintenance and experiential enhancements over the next five years.

Construction on the bridge is slated to begin in late 2021.

“At U.S. Bank, we are committed to powering human potential and seeking out ways that we can contribute to the betterment of the communities we call home,” Tim Welsh with U.S. Bank said in a release. “We are proud to be a part of this exciting and important project that will help connect people, places and communities in new ways for years to come.”

The bridge, which was a key component of both the South End Vision Plan and the Center City 2020 Vision Plan, is expected to cost $11.5 million. U.S. Bank joins other private and nonprofit investors in funding the bridge’s construction, as well as the city of Charlotte, Mecklenburg County and the North Carolina Department of Transportation.

“Today’s announcement illustrates the incredible way our community vision plans lead to action,” said Pat Rodgers, chair of the Charlotte Center City Partners Board of Directors. “As we kick off the 2040 Center City Vision Plan effort, this public-private partnership is a reminder of the results of our community’s innovative spirit and collective hard work.”

Early voting for local elections has begun, with the Hal Marshall annex kicking things off on Wednesday and 12 other sites opening on Thursday. We’ve got a full Election Guide coming your way next week, but if you must go now, check below for a list of sites and here for a schedule as to when they are open.

City council representatives are leaving their seats open in three districts, with Greg Phipps in District 4 (University City) and Justin Harlow in District 2 (west Charlotte) not seeking reelection and Lawana Mayfield of District 3 (southwest Charlotte) trying her hand at an at-large seat. 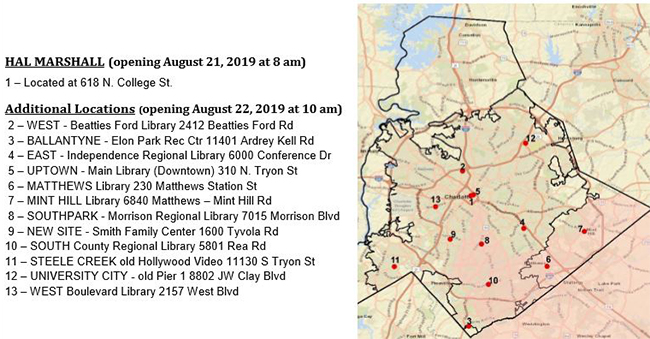 With news breaking earlier this year that Amelie’s French Bakery and Café would soon be forced out of its popular flagship location in the NoDa @ 28th shopping center in Villa Heights, ownership announced in a press release on Wednesday that its new location will be located in NoDa proper. The new shop, which is scheduled to open in spring 2020, will be located at 136 E. 36th St., the former home of the Hart Witzen Gallery.

“Our team is experiencing a variety of emotions around this move,” stated executive chef and operations director Mary Jayne Wilson in the release. “We have grown from a single bakery storefront to having six bakeries across three states in the over 10 years since opening our doors. This is our original home and where our story began; where we grew, learned, failed, triumphed and, along the way, determined who we are as a company and what we value.”

According to the release, the new Amelie’s location will keep some of the features that made it such a popular hangout — such as the whimsy décor and 24/7/365 hours — while adding expanded seating, a large outdoor patio, improved technology, more natural light and upgrades to the event space. 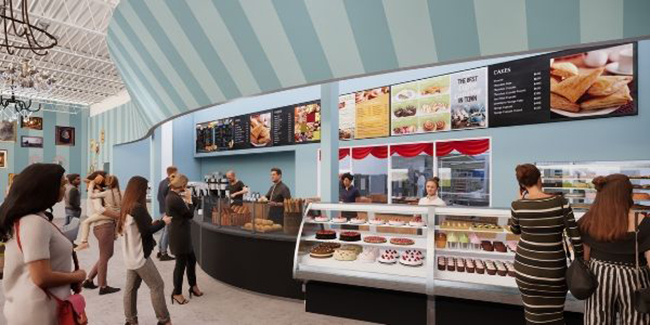 The team expects that the original location will remain open until the new one is ready.

“This community is our heart and where it all started,” said owner Bill Lamb. “We have been in the North Davidson [Street] location for almost 11 years and the community has supported us, always pushing us to be better. We are thrilled to continue to be part of this neighborhood for many years to come.”

The only homicide reported this week occurred on Tuesday, with CMPD stating that officers responded to a shooting call at West Trade Street near the I-77 ramp just after 4:30 p.m. and found a man with a life-threatening gunshot wound. He was rushed to Atrium Health’s Carolinas Medical Center, where he later died. CMPD has not yet released the victim’s name or any other details about the shooting.

The man’s death is the 70th murder in Charlotte this year.

Swimming in the Gene Pool