Former owners and managers of west Charlotte’s Lake Arbor Apartments agreed this week to pay $547,500 to settle litigation brought on behalf of a class of former tenants who alleged that the defendants violated Charlotte’s Housing Code and North Carolina consumer protection laws between 2015 and 2019 when they improperly sought and collected rent from Lake Arbor tenants found to be living in dangerous conditions. After the filing in 2019, Lake Arbor evicted all tenants rather than complete repairs. 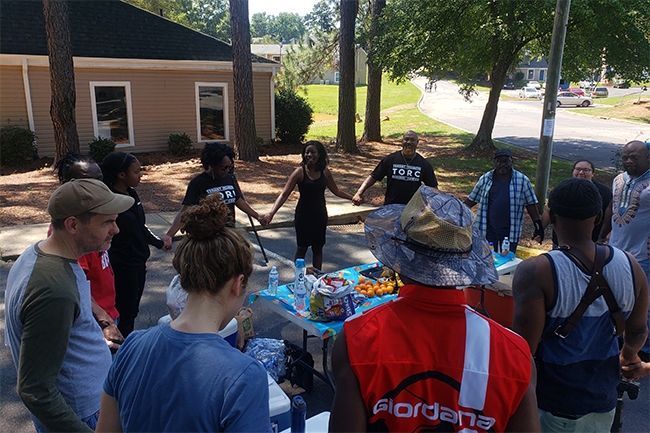 “These landlords kept taking the rent and taking the rent, all the while refusing to fix serious safety problems in tenants’ units, as found by the city,” stated former Lake Arbor tenant and class plaintiff Serita Russell in a release on Wednesday.  “It’s about time they were called to account.  I’m glad the lawsuit was settled, and I hope other landlords take this as a lesson on what happens when a landlord cares more about making money than the safety of its tenants.”

At a press conference on Friday afternoon, hours before new statewide restrictions went into effect, Mecklenburg County Public Health director Gibbie Harris addressed a video that’s gone viral on social media and has potential to go viral in a more literal sense. Harris asked that anyone who was at QC Social Lounge when video was taken showing more than 100 people standing in close quarters without masks on Thursday quarantine for 14 days and get tested for COVID-19 in about a week.

Also at the press conference, CMPD Deputy Chief Jeff Estes said the department “won’t be setting up roadblocks” to catch people out past curfew, but will interact with folks they come across on the street to inquire as to whether they meet the curfew’s exemptions. Dr. Lewis McCurdy, special director of infectious diseases at Atrium Health, said he fully expected the FDA to approve the Pfizer vaccine for use in the United States in the next couple days, and said health-care workers could begin receiving their vaccinations as soon as next week. FDA approval did come later Friday night.

Friday’s press conference came as COVID-19 numbers skyrocketed locally and around North Carolina.  According to the most recent data released Friday morning, there had been 49,374 total cases and 481 deaths due to the virus as of that point, an increase of 4,306 cases and 13 deaths since the same time last week. According to in-depth data from cases that occurred through Wednesday, the number of hospitalizations due to COVID-19 and the average test-positivity rate continue to climb. The average number of tests returning positive remains at 10.9%, a fairly stable trend, while the average number of people hospitalized due to the virus on any given day has gone from 226 to 254 over the last week.

Following last week’s news that a group of property owners have filed a lawsuit against the city of Charlotte and Mecklenburg County for allowing an “enforcement free zone” just north of Uptown where nearly 100 residents without homes have set up a sprawling encampment, the county released a statement this week stating that they have worked with partnering organizations to create enough shelter capacity for everyone living at the camp.

Thursday’s release stated that latest counts have found 91 people — 30 women and 61 men — living in the encampment, which is located in the area along West 12th Street at North Tryon and North College streets. According to the release, the county has worked with Roof Above to create enough shelter capacity for all the individuals at the encampment to live in a safe and socially distanced manner.

In October, Roof Above announced new plans in partnership with Salvation Army to expand shelter capacity in Charlotte. The organization’s outreach team has informed everyone at the encampment of the availability of beds at the shelters “to ensure all who are  interested are aware of this resource,” according to the release.

Discussing why some folks without homes would turn down the chance to stay at the shelter, Stacy Phillips of Watchmen of the Streets told Queen City Nerve the decision can be related to negative experiences in the past, addiction, not wanting to be separated from a partner or family member, PTSD or any number of other reasons.

“Despite what some wish or think, the houseless community should have autonomy over their bodies including where they sleep,” Phillips said.

While the release did not directly address the lawsuit, it did clarify that neither the county nor the city has the authority to force those living in the encampment to move, emphasizing that the decision is up to the owners of each individual property. The county suggested that residents interested in helping people living at the encampment contact Block Love CLT, Roof Above or the Salvation Army to do so rather than simply showing up there as many have done lately.

CMS Board Votes to Go Back to Virtual

Amid rising COVID-19 numbers, the Charlotte-Mecklenburg Schools Board of Education voted 6-3 on Tuesday to return to virtual learning until Jan. 19 at the earliest. Some middle- and high-school students will take end-of-course exams in-person, while Pre-K students will be offered in-person learning opportunities.

At the time of the vote, about 41,000 pre-K and elementary school students had returned to in-person learning, with most middle- and high-school students set to return in January.

A man was killed in the Hunters Pointe apartment complex in the Hidden Valley area of north Charlotte on Thursday, bringing the total number of homicides in Charlotte this year to 110.

Just after 1 a.m. on Thursday morning, police responded to a shooting call on Prospect Drive and found 25-year-old Joshua Sealy dead of a gunshot wound. A short time later, a second victim from the same shooting arrived at a nearby hospital with a non-life-threatening gunshot wound. No arrests have yet been made in the case.