Following the rhythmic kicks of orange-clad Vance High School drummers, Charlotte Mayor Vi Lyles took the Oath of Office to serve her second term. Lyles acknowledged that last month’s victory makes her the first second-term mayor to be elected in nearly a decade.

“In the past two years the Charlotte City Council accomplished many successes, real successes and aspirational thoughts and ideas,” Lyles said to the packed chamber in the Charlotte-Mecklenburg Government Center on Monday. “I ask you to continue to push us to do more for all of the people who are displaced, those who need to remain in affordable housing, as we continue to work to preserve and build safe places for everybody.”

The mayor vowed to begin working with the new council on the first day of 2020 to review data related to the spike in homicides that have occurred in the city this year in an attempt to pinpoint areas that need greater attention and community-based law enforcement resources.

By collaborating with courts, district attorneys and the county, Lyles said the city will develop an evidence-based plan to address Charlotte’s growing rate of gun violence.

Public transit is another mayoral priority — including the development of a reliable bus system and a Silver Line light rail track that reduces the city’s carbon footprint and expands transportation options in east and west Charlotte.

“This is an opportunity for us to address and correct the inequity in our city in the most physical way,” Lyles said.

Lyles said that in January she will appoint a citizen’s committee on transportation infrastructure and funding to seek advice on “this most important strategic issue.” A fiscally responsible and strategic transportation plan is required for Charlotte’s continued growth and success, Lyles said.

The new city council, including eight incumbents and three new members, was sworn in at the event, as departing members and newcomers were allowed to address the packed house.

After acknowledging the shock of hearing her own voice resonate for the first time through the chamber on Monday, newly elected District 4 council member Renee Johnson thanked local donors, voters and her campaign team for their support.

“I will give you my absolute focus and my absolute best. Together we will build strong, safe and healthy communities for now and for generations to come,” Johnson said.

Johnson is replacing Greg Phipps in District 4, which covers University City and much of north Charlotte. Malcolm Graham, who served on the council from 1999 to 2005, will replace Justin Harlow in District 2, which covers the Historic West End. Neither Phipps nor Harlow ran for reelection.

Victoria Watlington rounds out the list of newcomers, replacing LaWana Mayfield in District 3, which covers southwest Charlotte. Mayfield tried running for an at-large seat this year, but lost in the primaries.

Councilman Graham returns to his post after years of serving in the state senate. “I’m back,” Graham began his allotted two-minute talk. Like other members on Monday, Graham focused on Charlotte’s rising homicide rate and urged leaders to treat the issue as a public health crisis. Since his sister Cynthia Hurd was murdered in the Emanuel AME Church shooting in 2015, Graham has become a staunch supporter of stricter gun laws.

Watlington thanked outgoing council members and the “scrappiest and bravest campaign team anyone could ask for,” when given the floor to comment.

“As we look to the next two years, we know we face challenges. We must deliver a comprehensive plan, preserve affordability, invest in transportation and support economic mobility, even as we prepare to showcase our city on a national stage,” she said.

The 2020 Republican National Convention (RNC) will descends on Charlotte in August, and community leaders can feel the heat of a national spotlight edging ever closer. New and returning councilmembers vowed on Monday to tackle existing and anticipated issues as the city prepares and continues to greet dozens of new residents each day.

“We all know that we, as the city of Charlotte are all greater than any national divisiveness that this country will experience. It will not happen here in Charlotte,” said Lyles.

Next year, these council members will need to make decisions related to a massive rezoning initiative and determining who will replace Kerr Putney as chief of the Charlotte-Mecklenburg Police Department.

After Putney’s original plan to retire on January 1, 2020, was shot down by the state treasurer, he announced on Friday that he’ll be staying on as chief through the RNC. 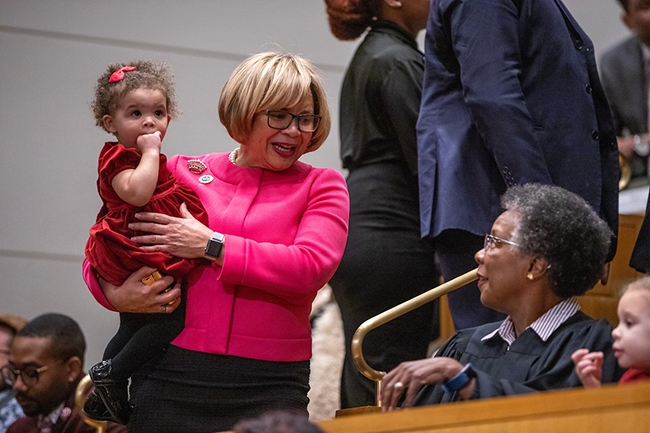 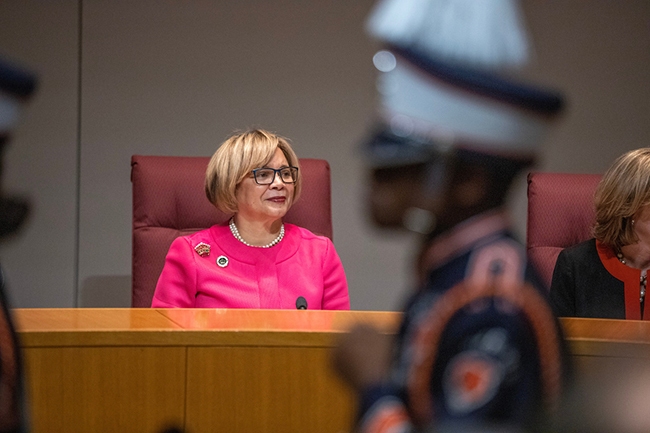 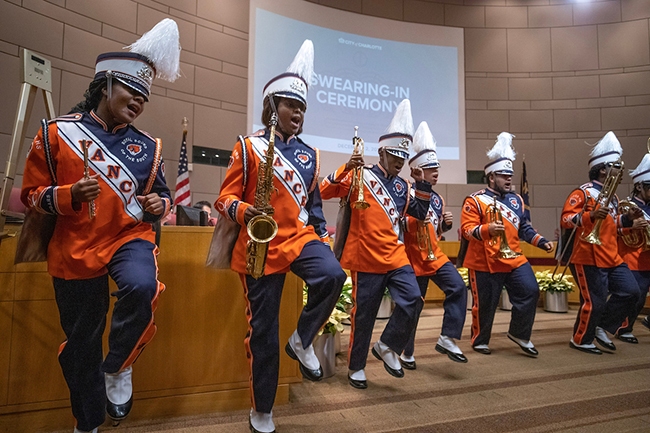 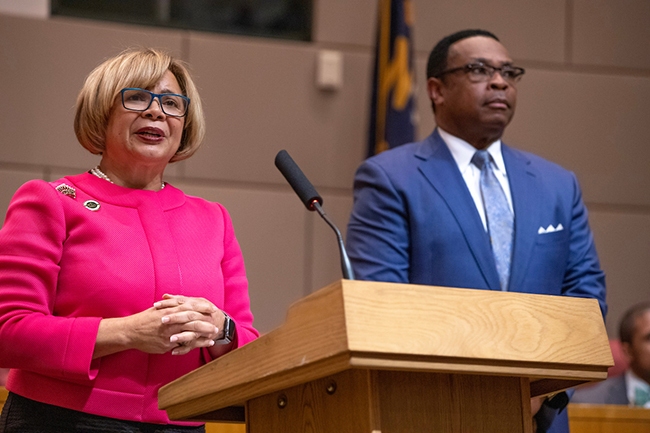 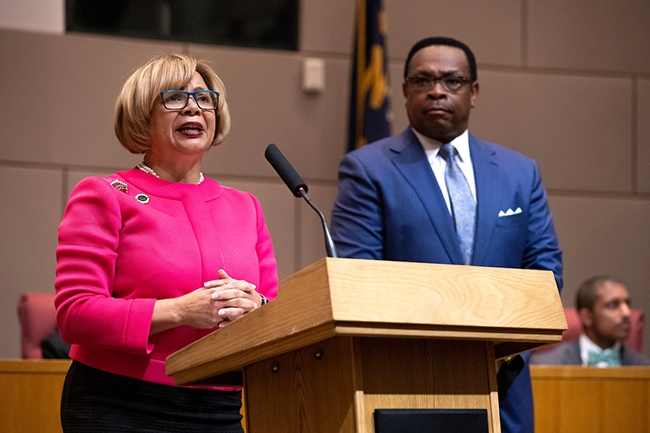 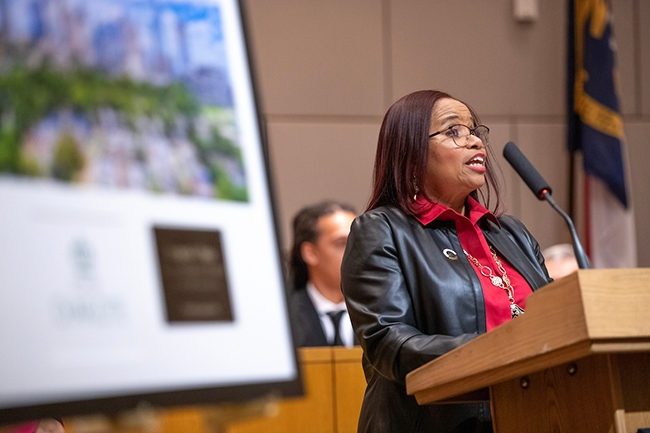 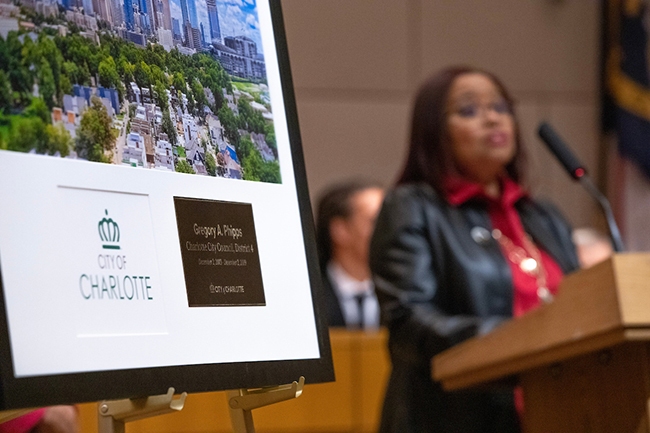 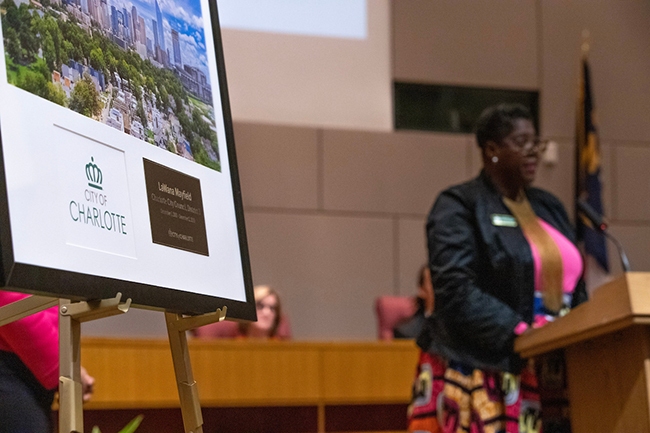 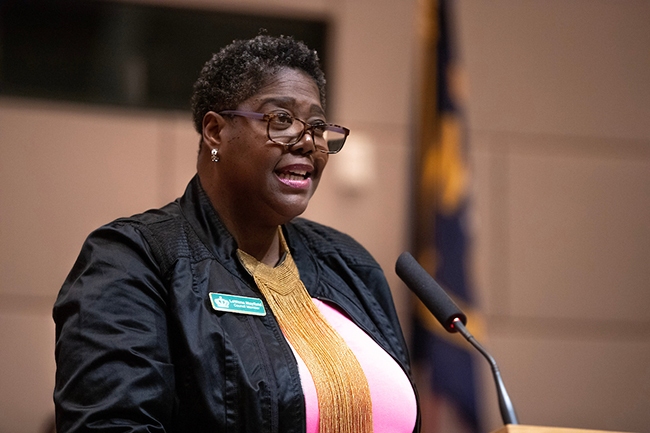 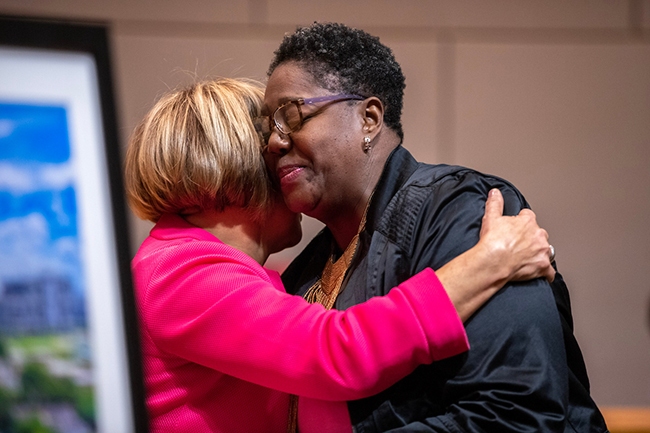 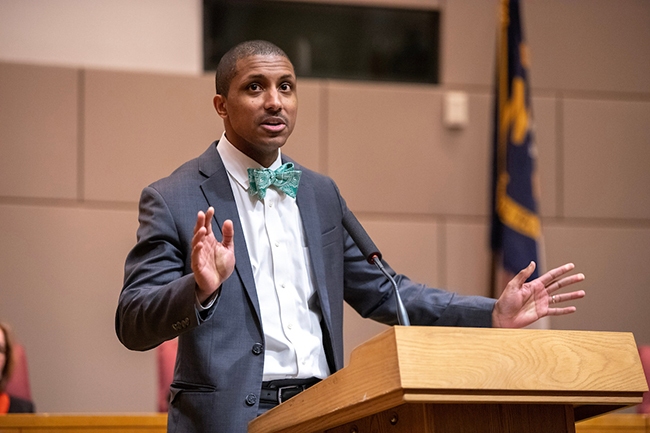 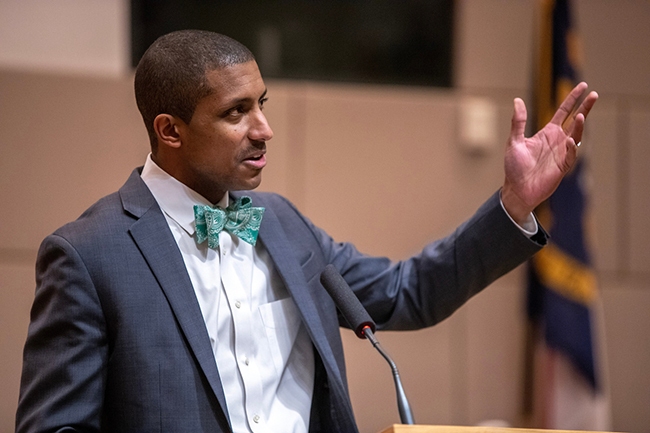 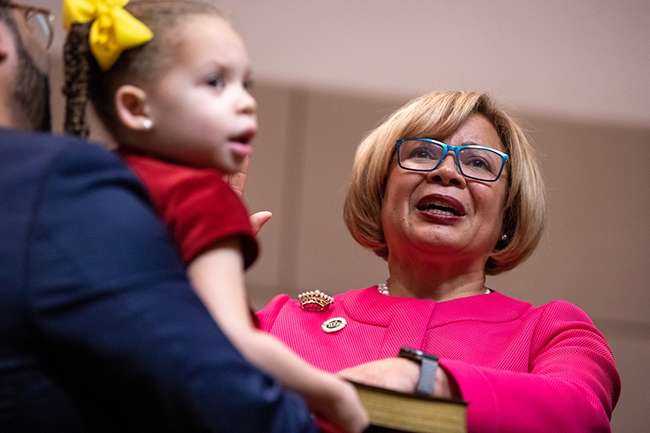 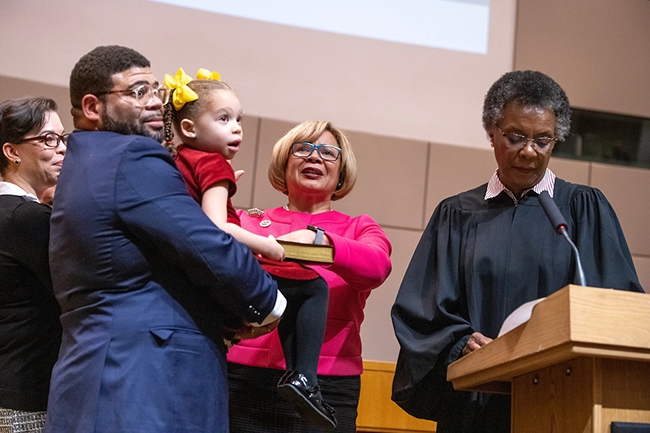 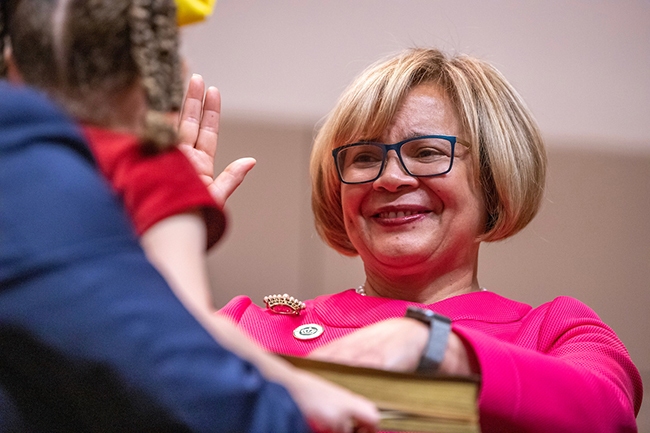 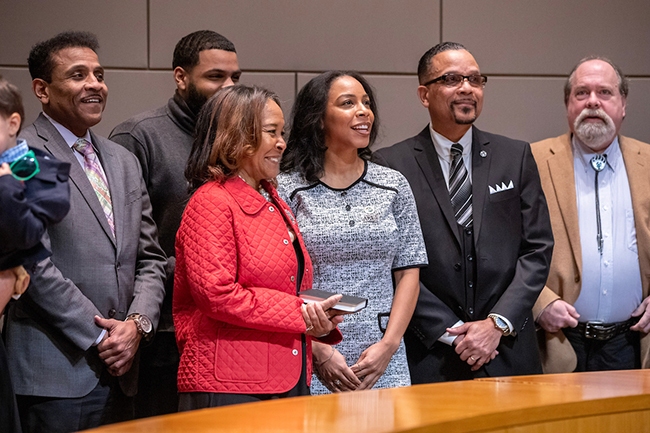 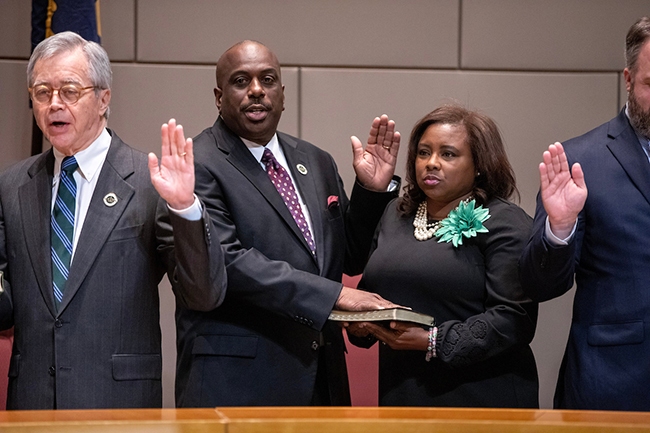 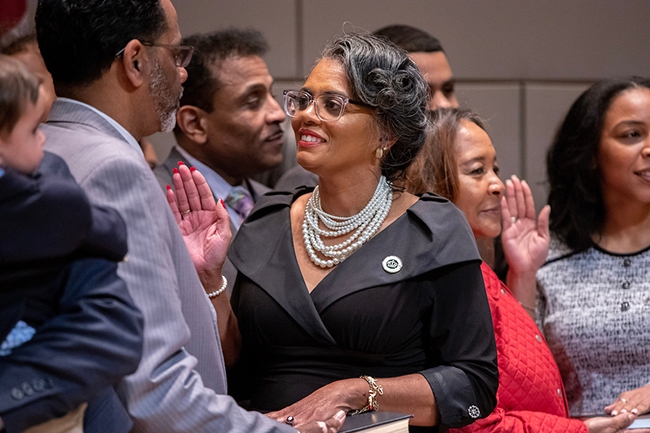 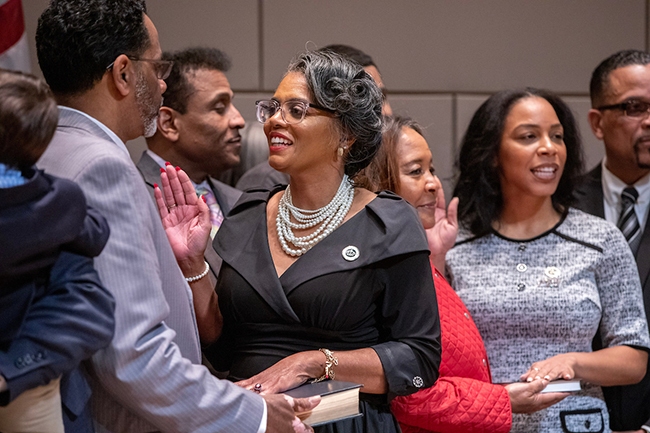 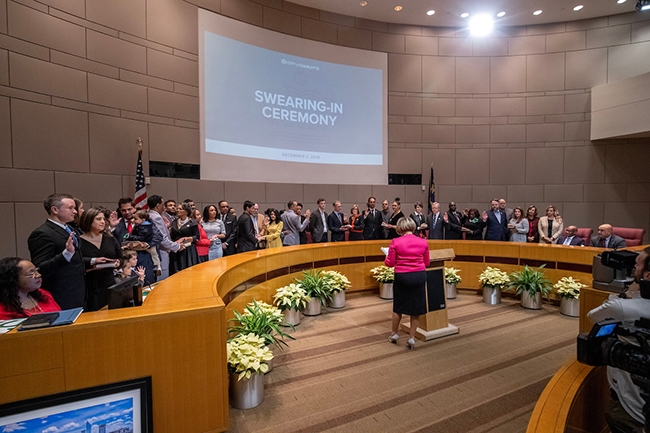 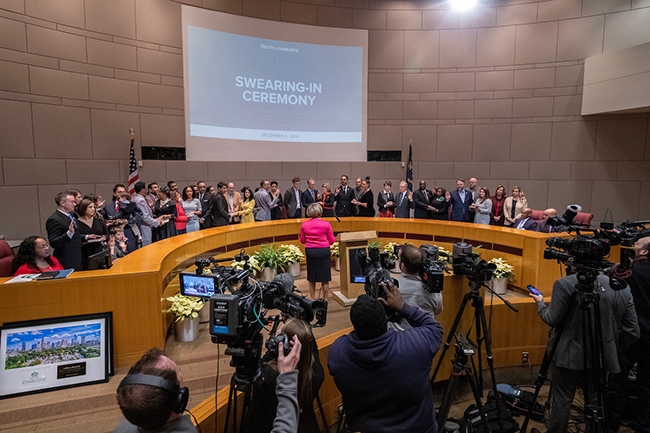 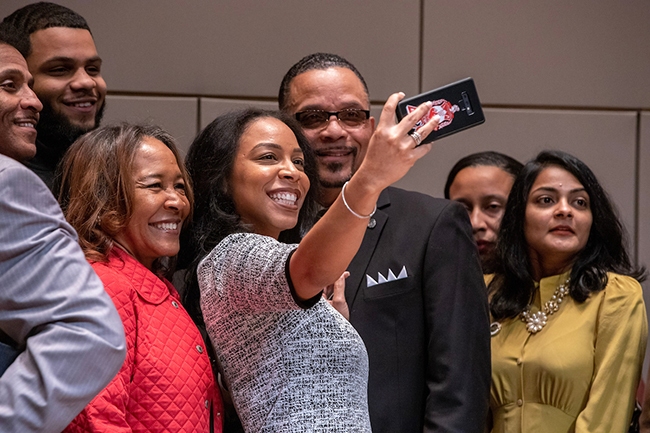 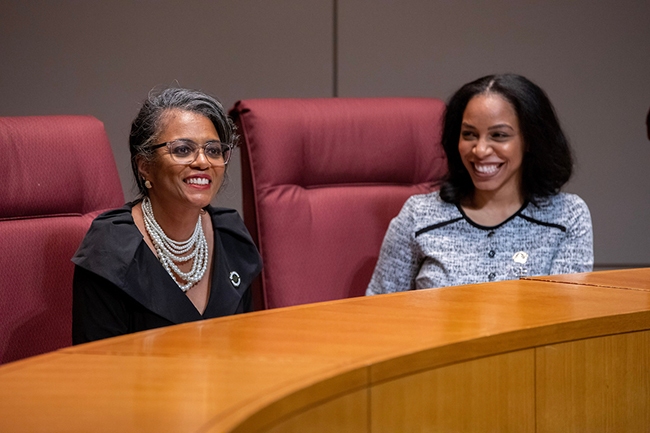 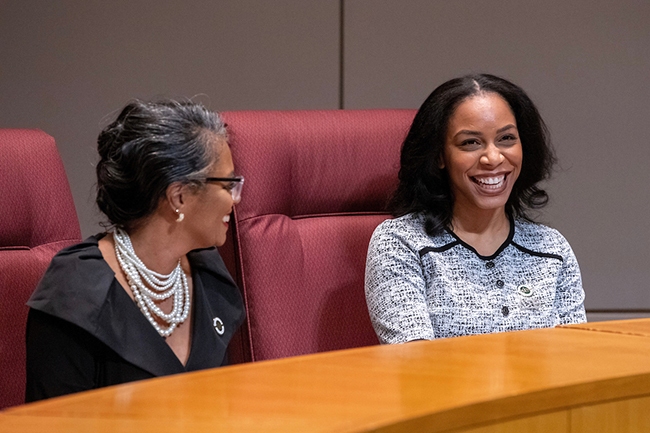 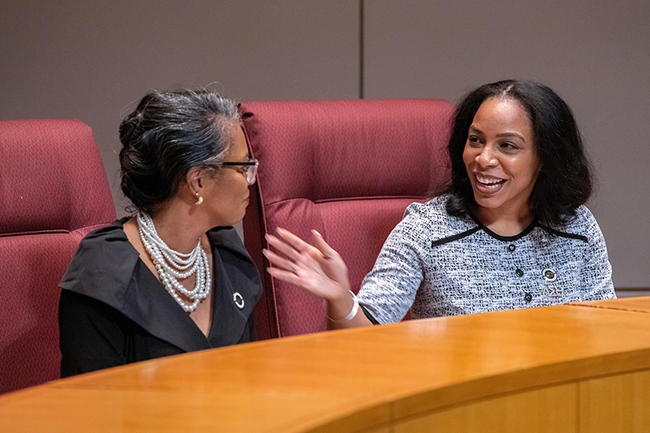 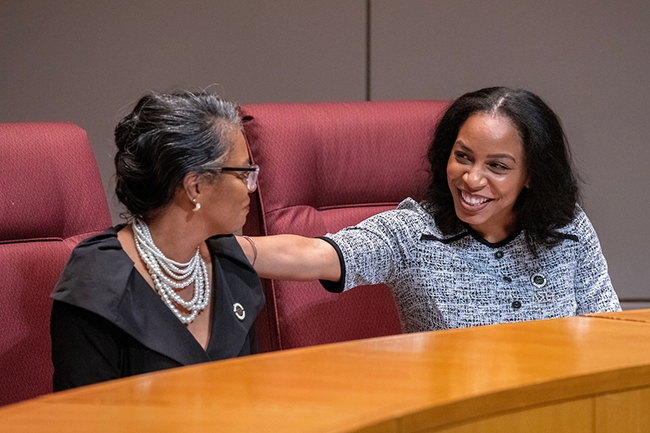 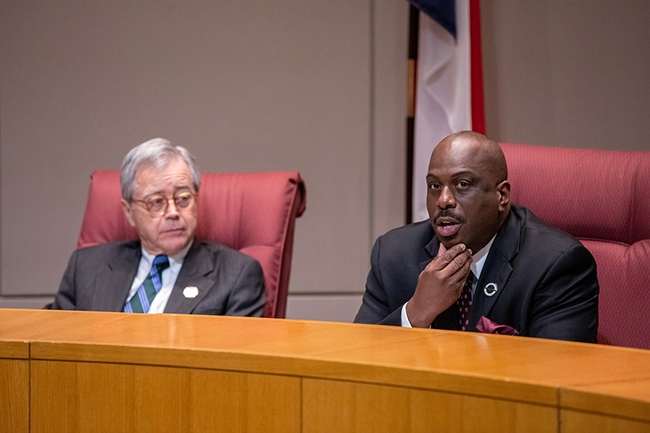 The Charlotte-Mecklenburg Police Department (CMPD) announced at a press conference on Friday that the department will no longer allow murder suspects to be released through the Electronic Monitoring Unit (EMU) program. The EMU will “continue to evaluate the implications” of removing armed robbery suspects from the program, as well.

At the press conference, Major Tonya Arrington provided a glimpse of this during the CMPD’s press conference today. According to Arrington, the EMU monitors between 400 and 500 people at a time, and this year has monitored over 1,930, an increase from last year’s total of around 1,400.

This year, 127 people have cut their devices off, 80 of whom were being monitored for violent or firearms offenses such as shooting, rape, robbery, domestic violence strangulation and firearm by felon. About 100 people have committed another crime while wearing the electronic monitoring device, Arrington said, including one murder and four armed robberies.

According to a release put out after the press conference, 31 of the 466 individuals currently being monitored by EMU have been charged with murder, 134 have been charged with armed robbery and 12 have pending rape charges. “This is a threat to public safety,” said CMP Chief Kerr Putney, “and electronic monitoring cannot be your safety net.”

Not everyone agrees, however. Kristie Puckett-Williams with the ACLU of North Carolina said the new rules only serve to paint suspects with a broad brush. In an email, she gave Queen City Nerve the the three reasons why she disagrees with Friday’s announcement: “One, as with pretrial detention, the point is the right of an individualized assessment of the risk of flight or harm to others before someone who has not been convicted of a crime is locked up. Two, the program described  makes a group determination based only on the charges levied, violating due process and equal protection rights. Three, community safety and justice would be best served by due process assessment of individual risk instead of blanket determination.”

With the beginning of the fiscal year 2021 budget cycle, Mecklenburg County is bringing three new additions to the process that provide outlets for community members to speak on the budget. 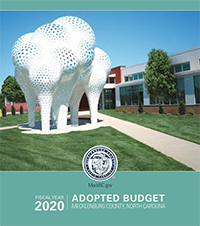 First is an online survey that is available in 100 different languages — in addition to paper versions available in English and Spanish. The survey is described as a “dynamic feedback tool” and is available on the Mecklenburg government website as well as 23 physical locations including 19 libraries, three senior centers and the Mecklenburg County Community Resource Center.

The second new addition is the Mecklenburg budget simulator tool. This software presents a hypothetical version of the budget that can be adjusted and edited by a public user and submitted to the county. Users will have the option to include personal comments and concerns along with their budget simulations. In January, results from the simulator will be provided to the Board of County Commissioners for consideration along with the survey responses.

Finally, the county will host five community engagement sessions throughout the budget process, which goes from now until the final approval on June 2nd, 2020. These sessions will allow the public to weigh in and ask questions. Two have been scheduled on Jan. 7 and May 7 and the other three are yet to be announced.

The new budget is set to go into effect on July 1st, 2020. Further information can be found at the county website.

Residents and City Employees to Build Bikes for Kids in Need

A group of city employees and residents are meeting this morning to put together bicycles for Right Moves For Youth a local school-based, youth development and student support program. Organizers plan on delivering the bikes to students before Christmas Day. Residents are encouraged to join the effort at a government building located at 1031 Atando Avenue from 9 a.m. to noon today.

“Our employees look forward to this event each year. It’s great to watch employees bring their kids and other friends and family to spend a morning putting these bikes together,” said Chris Trull, division director for the city’s Fleet Management Division.

Spokes Group, an organization that has provided 49,100 bikes to underprivileged youth since 1994, will provide the bicycles, which will then be built by those in attendance this morning.

Tayuanee Dewberry, executive director of Right Moves For Youth, says her organization is grateful for the support of the Spokes Group and the city of Charlotte.

“The best part is seeing the students’ reactions when they receive the bikes,” says Dewberry. “Absolutely priceless.”

Boy Hit and Killed in Front of School

There were no homicides in Charlotte this week, and the total number of killings in Charlotte this year remains at 103. It remains unclear, however, whether a driver will face charges after hitting and killing an 11-year-old boy in front of McClintock Middle School on Thursday evening.  The boy was apparently crossing the street at around 6:30 p.m. on Rama Road near Cabotwood Lane in front of the school, where a basketball game was taking place at the time of the accident. The boy, whose name has not been released, was taken to the hospital after being struck. He was later pronounced dead.

[Update: An 11-year-old boy and 12-year old girl have both been charged with involuntary manslaughter in relation to this case. According to CMPD: “During the course of the investigation, detectives determined a physical altercation took place involving the victim and suspects near the roadway.  This altercation led to the victim entering the roadway and ultimately being struck by a vehicle.  Homicide Unit detectives identified the juveniles as suspects in this case and they were transported to police headquarters to speak with detectives.  At the conclusion of the interviews, both were charged with involuntary manslaughter.” The names of the juvenile suspects were not released.]

Elizabeth McGuire and Ryan Pitkin contributed writing and reporting to this roundup.

Soundwave
Nooze Hounds
Q.C. Nerve on Twitter
RT @itsjennifermich: I’ve had their food and it’s delicious. Congratulations and kudos to them for their work.
h J R
@queencitynerve

In this month's column, @omgaerin visits one of Charlotte's best dive bars. If you know, you know... https://t.co/5nxn1AnWOZ
h J R
@queencitynerve

When Rod and Rana Brown couldn't find good seafood in CLT, they made their own. Now they're sharing what they learn… https://t.co/O87M905zJ2
h J R
@queencitynerve